A Note from Green Diamond
Advertisement 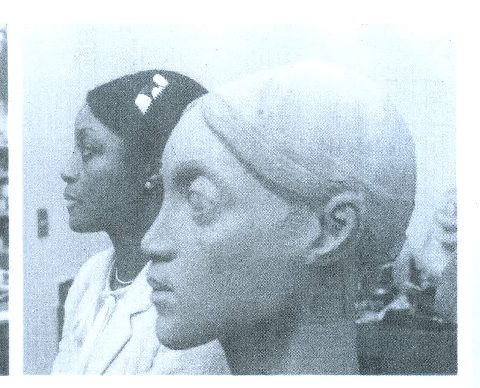 GLORY: A Life Among Legends is the compassionate memoir of Dr. Glory Van Scott, the renowned dancer and producer. And something more, says Melony McGant, a friend and fan of the artist, who beleives the book “a treasure trove of historic and personal photographs offering the reader glimpses of the passions of a generation in which Black culture took its place among the high arts and became its own voice in the Civil Rights Movement.” It is a “testament to the power of art, the power of commitment, the power of education,” according to the press release. But in the essay below, excerpted from the book, McGant gives us an up-close look at the woman – as an icon among icons.

And always when I think of Dr. Glory, I am reminded of Miss Katherine Dunham. Both of these ladies captured the hearts of thousands through their work and have lived with a commitment to stretch the boundaries of possibility. Both shared the qualities of being artistic, keenly compassionate, exquisite in understanding, mystical, powerful, persistent, receptive and hugely talented.

Perhaps this is why, when I acted as an assistant to Miss Dunham, she would speak of Dr. Glory, who seemed to constantly be planning some event at Symphony Space to salute Miss Dunham or some other dance legend. Often, Miss Dunham would say, “Call Glory.”

When she wanted something special or needed an opinion, it was, “Call Glory.”

When she needed transportation, it was “Call Glory.” Dr. Glory would arrange for her lighting designer, Bugsy (Leonard Buggs, affectionately known as the “Black Knight”), to transport Miss Dunham around New York City.

When Oprah Winfrey named Miss Dunham as one of her legends, Miss Dunham shared the exquisite invitation with me and said, “Call Glory.”

And when Miss Dunham ascended on May 21, 2006, ten days after she had finally achieved her wish of meeting and speaking to Oprah face-to-face, and twenty days after the Boule Blanche, held at Riverside Church and produced by Dr. Glory to honor the publication of Miss Dunham’s last book, Kaiso! I received a phone call immediately. It was as if Miss Dunham was speaking from the Heavens. I was asked to “Call Glory.”

At the time, Dr. Glory was traveling in Venice and had no working phone. Strangely, though, she had called me the day before just to say hello. The phone number was still in my phone and I called with the hope that I could reach her. And somehow, I did. She was at dinner with her beloved Mr. George Wein. I don’t think my call surprised her because even at the Boule Blanche, she had had the feeling that those were Miss Dunham’s final days on this earthly realm.

Dr. Glory requested that I immediately contact her friend Jennifer Dunning. Miss Dunning, then-dance critic at the New York Times, was able to write a profoundly touching obituary for publication in the newspaper.

Through performance and producing, Dr. Glory Van Scott has honored the legacies of Miss Katherine Dunham, Syvilla Forte, Agnes De Mille, Talley Beatty, Pearl Reynolds, Fred Benjamin, Louis Johnson, Joan Peters, Loretta Abbott and several others. She is the keeper and purveyor of good memories of those she has been affiliated with in the artistic community.

I began working with Dr. Glory through Miss Dunham. I was given the privilege of seeing pictures, memorabilia and writings about her life as a dancer, a model and a Broadway performer. The more I learned about Dr. Glory, the more I thought that her story would make a wonderful book—and a beautiful movie. And yet, when I would question her about doing a book on her personal experiences, she would often just smile and change the subject.

Like Miss Dunham, Dr. Glory became a coach, a mentor and supporter. She named me first marketing director, and then coordinating director for Dr. Glory Van Scott Productions. As we worked on various events for Dr. Glory’s Youth Theatre—salutes to Miss Dunham and other productions—she would share stories of her friendships with luminaries in the arts. I would suggest that she write. Always, again, she would just smile and change the subject.

When we met in favorite restaurants where they knew us by name, and stayed so long we often were the last guests, I would too often say, “When your book is published…” And, finally, the resistant Dr. Glory grew tired of my constant reminders. She began writing. I began reading. We arranged for Andrienne Croix and Lee Gretenstein to assist with the typing. Over several years, I coached, listened and begged for more. Dr. Glory kept writing and sharing beautiful stories and pictures of her legacy. And now we have the book Glory: A Life Among Legends!

Dr. Glory has supported me in all of my writing and creative projects, as well as my journey to become an interfaith minister. I call her an embodiment of Kuan Yin, though she laughs and says, “No, I’m not! I’m a monster.” She calls me Green Diamond.

My mom, Betty J. Tilman, Katherine Dunham and Dr. Glory Van Scott have each inspired me with their goodness and helped me to live my good purpose. Dr. Glory often says that they “all came from the same cabbage patch in heaven!” Perhaps our meeting was already written in the stars. Some would say that it was destiny. I know only that I am humbled and grateful to have had the honor of knowing, learning from, loving and supporting the legacies of three great, magical, mystical, powerful queens of grace and integrity.

GLORY: A Life Among Legends is available in Harlem at The Riverside Church Welcome Center/Gift Shop, 91 Claremont Avenue, and The Caribbean Cultural Center African Diaspora Institute, 120 East 125th St., or online at amazon.com.

Next week, Dr. Glory Van Scott, the cousin of Emmett Till, offers her thoughts on how the after-effects of the tragedy cemented a lifelong journey that translated anger and grief into her passions for dance, theater and education.

A Salute to Indira, Pauletta and Toni Powerhouses in Brooklyn’s Arts and Culture Scene share their agency with 50 women writers