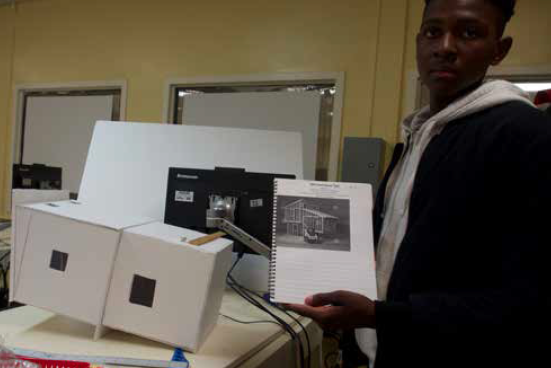 Too often when we think of a school’s curriculum, we think of specific courses a school has to offer, but after a sit-down one Friday afternoon with Grecian Harrison-Walker, Principal of Boys and Girls High School, one gets the idea curriculum is the sum total of a student’s experience once they enter the school building from ninth grade until they depart four years later.

For parents and students looking for a high school, Principal Harrison wants them to know her school is ready now, not four years from now, to offer a quality education.

“I get excited about what’s happening behind these red brick walls. Teachers are happy here.” The school has built a weekly common planning time into the school’s schedule when staff meet in curriculum groups to look closely at how students are performing on various areas in their subject classes. They also meet weekly in grade teams so issues relevant to a specific grade can be addressed by teachers of all subjects.

During these team meetings teachers implementing the Judith Hochman’s The Writing Revolution could discuss how to devise strategies to improve writing across all subject areas one sentence at a time.

“This is a new day at Boys and Girls,” says Harrison-Walker. “These are not the days of the 4,000” (referring to a time when the student body reached that number).  A population of 440 students, “enables us to create a nurturing environment where students are known by adults and feel supported because staff members know their students’ emotional, psychological social and emotional needs.”

During the school’s daily advisory period, a guidance class, teachers equip students with the psycho-social skills needed to handle the vicissitudes of life such as: bullying, peer pressure, de-escalating conflict, etc. In addition, the school has its eye on life after high school, and staff help students navigate college, career or military opportunities.

Guidance counselor Jeannelle Louis meets with students individually and in groups to insure they “are very intentional about post-graduation plans early.” To support that goal, Boys and Girls adopted the following programs:

Besides preparation for college, the school also prepares students for industry-level demands in the work world through course offerings such as the following:

Then there was Adedayo Adigun, a drama student, who successfully auditioned for Spike Lee’s “She’s Gotta Have It” and will play the role of a middle school student in the Netflix remake.

An oak tree has grown in Brooklyn and Principal Harrison credits clergy, politicians, an advisory board and alumni for keeping it alive. She conducted a clergy breakfast to share the school’s progress and developments, and is proud to “blaze the torch” alongside former members of the state assembly such as Al Vann and Annette Robinson; current representatives Robert Cornegy, Tremaine Wright; and Borough President Eric Adams. Their work and contributions on the outside help preserve what the school is trying to do inside.

“So send your kids here, if you don’t want them to get lost. We deal with the whole child,” says Harrison.