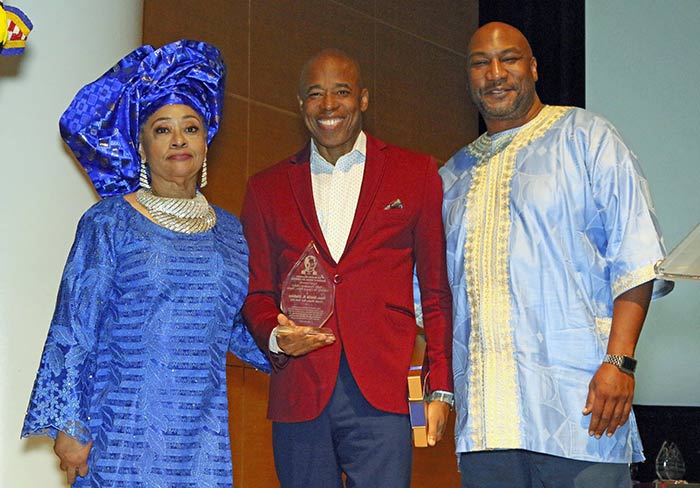 The connection to Africa and heroes past and present was strong at the 5th Annual Madiba Humanitarian Awards, organized and hosted by Vira Jones, founder and president of the Bedford-Stuyvesant Museum of African Art.

It was an evening celebrating the best among us and paying tribute to that extraordinary human being, Nelson Mandela.  Former Assemblyman Al Vann spoke of the first stop Mandela made when arriving in the United States – Boys & Girls High School in Brooklyn. He recalled his experience of being on a delegation with Mayor Dinkins on the eve of the South African election, saying they knew the ANC would win.

On visiting the Mandelas, he said, “You can imagine how that felt!” (being in Soweto and in the home of Nelson Mandela).  “It was extraordinary!”  Remembering that time, he said, “I’ve been truly blessed.  Whatever happens to me from this point going forward, the life I have had because of the people of Bed-Stuy and Crown Heights, is unbelievable!”

Speaking to the awardees, he went on to say, “Nelson Mandela was the greatest human being of our lifetime, and the greatest humanitarian ever,” and to be receiving an award in the name of “Madiba” is “extra special.”  “For someone to think you exhibited those traits of humanitarianism, so much so to be associated with Nelson Mandela, that’s a very special combination and I want to commend you for who you are, and [for] the life you’ve lived, and how you got here.”

Brooklyn Borough President Eric Adams told the audience that among them, were the shoulders he stood on to be where he is today.

He said it was Al Vann who did the work of blazing the trail as an “intellectual giant,” both in Albany and in the City Council.  To Mr. Vann he said, “I don’t think people really know your legacy and how much you contributed, not only to Brooklyn, but the country as well.”  And to the audience Adams said, “We did not get here because folks tweeted us here or Instagrammed us.”

To understand how he and others got to be where they are, you’d have to “look under the fingernails of these great legislators and see the dirt and grime from climbing up the mountain one hand at a time,” he said.

Adams noted that it was almost 30 years ago that David Dinkins became the first African American Mayor of New York City. He said it grew out of the energy awakened by the Jessie Jackson campaign and on-the-groundwork of people like Roger Green, Paul Wooten, Al Vann, Annette Robinson, Bill Lynch and others.

Asking all to connect the dots, Adams said he was able to be at Yankee Stadium providing security for Mandela because Rev. Herbert Daughtry told him and 13 other young Black men to go into law enforcement after Randy Evans was killed.

“He told us to go inside and start an organization and that gave birth to 100 Blacks in Law Enforcement Who Care, and a Borough President.”

Adams said these are things to be remembered because gentrification is about more than homes, it’s about “displacing your conversation and displacing your history at the same time.”

Laurie Cumbo commended BSMAA founder Vira Jones, saying she knows the “blood, sweat and tears” shed to build an organization.  And to do it in the midst of the housing crisis, the health care crisis and all the other hard times people are facing; times when the arts are not given much thought.  “The truth is our history and culture cannot be relegated to a class or a day, it has to be celebrated every day.”  Cumbo said she was inspired seeing Annette Robinson and Al Vann.  As a Council member, “just trying to maintain what you have done” gives her a deep appreciation of the work involved. “I can only imagine what it must have taken under those circumstances to create a Bedford-Stuyvesant Restoration, to create a Medgar Evers College, to create a 962-967 Day Care Center, to create all of these entities that we have to fight for just to maintain.”

Cumbo agreed with Vann, saying, “Gentrification is not just about our homes.” As she came into office and Assemblywoman Annette Robinson had “passed the baton” to Tremaine Wright, it was at that time that she saw what gentrification was about.

Olympic fencer and American Fencing Team member Ibtihaj said she knows she is an inspiration and role model for young girls. She recognizes and acts on what she sees as her responsibility to give back as others gave to her.

Sharon Content, president and founder of Children of Promise, NYC, spoke of her organization’s work with the children of incarcerated parents.  They hurt in special ways and are susceptible to crime and need extra support.

In her address, Amb. Arikana Chihombari-Quao said she wondered why someone would call her from her medical practice in Tennessee to be an Ambassador to the U. S.  After hearing Ms. Quao speak, you knew that whoever discovered her knew exactly what they were doing.  And we thank them for it. The text of her speech follows.