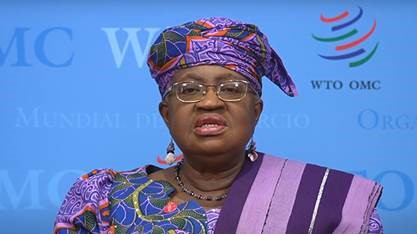 Mar. 28, 2022 (GIN) – Ngozi Okonjo Iweala, the head of the World Trade Organization, is warning that skyrocketing global food prices as a result of the war in Ukraine could trigger food riots from people going hungry in poor countries.

WTO Director General Okonjo-Iweala urged food-producing countries against hoarding supplies and said it was vital to avoid a repeat of the Covid pandemic, when rich countries were able to secure for themselves the bulk of vaccines.

In an interview with The Guardian of the UK, the WTO director general noted the dependence of many African countries on food supplies from the Black Sea region.

“I think we should be very worried. The impact on food prices and hunger this year and next could be substantial. Food and energy are the two biggest items in the consumption baskets of poor people all over the world,” Okonjo-Iweala said.

Okonjo-Iweala, a former Nigerian finance minister, said 35 African countries were dependent on food imported from the Black Sea region, adding that Russia and Ukraine were responsible for 24% of global supplies of wheat.

After being strongly critical of the “vaccine apartheid” that affected Africa during the pandemic, she said WTO member states had to resist the temptation of protecting their own food stocks.

“It is a natural reaction to keep what you have – we saw that with vaccines. But we shouldn’t make the same mistake with food.”

The last time rising food prices sparked food riots was between 2006 and 2008. Protests broke out in developing countries as  prices in a wide range of food, oil and other primary commodities increased in dramatic fashion, in some cases more than doubling within a few months. Policymakers were presented with the challenge of simultaneously addressing hunger, poverty, and political instability.

In Africa, food riots swept across the continent, from Egypt and Tunisia in the North, to Burkina Faso and Senegal in the West, and Madagascar and Mozambique in the South (Fig. 1). The crisis reinforced the

extent to which oil and food markets have become highly interdependent, and highlighted the relative inability of national governments and the international community to adequately deal with dramatic surges in food prices.

“We must make sure we learn the lessons from vaccines and previous food crises,” Ms. Okonjo-Iweala said. “I am not sure we can fully mitigate the impact of the war in Ukraine because the numbers involved are huge, but we can mitigate some of it.” w/pix of N. Okonjo-Iweala