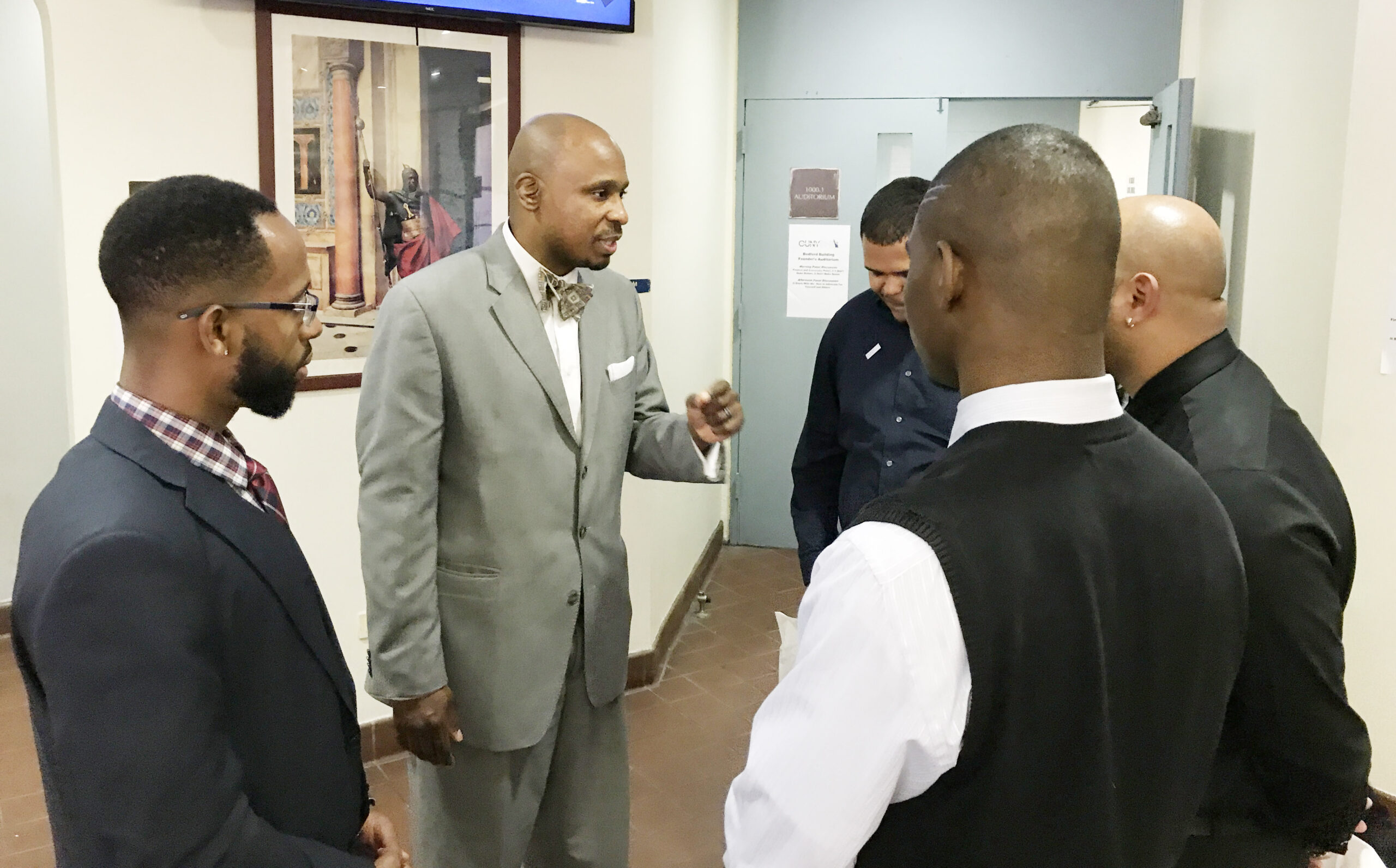 Last Friday, more than 1,000 students, faculty, administrators and parents from communities throughout the tristate area convened on Bedford Avenue at Medgar Evers College for the 12th Annual CUNY Black Male Initiative Conference. The conference is a CUNY-wide initiative intended to enrich and support the educational success of males from underrepresented groups, particularly African-American, Caribbean and Latino males. The initiative was created in 2004 as a method to offset the evident pattern of ongoing discrimination that many underserved Black men in New York City face, particularly in the arenas of education, criminal justice and employment. The BMI and the need to speak to issues of disparity in relationship to young Black males was echoed by President Obama’s “My Brother’s Keeper Initiative”, which was launched in 2014.

The theme of this year’s BMI Conference was Rewriting the Narrative. The panel discussions throughout the day focused on five key topics: media, advocacy, economics, policy and incarceration. All of the discussions and programming targeted the processes and methods of dispelling stereotypes and negative imagery associated with men of color. The conference had not one but two keynote speakers. The morning keynote lecture was given by Dr. Bryant Marks, Professor of Psychology and the Director of the Morehouse College Male Initiative. The afternoon keynote lecture was given by Mychal Denzel Smith, a writer for the Nation magazine.

Black men of all ages were on hand to learn and to educate one another. For many of the younger students it was their first time hearing about certain concepts or being included in certain conversations. Former Hip-Hop Minister Conrad Tillard moderated a media panel discussing the importance of being a creator of social media content and not just a user. He stressed the need for Black men to maintain a solid online reputation and presence, and working to change the online perception of Black men as thugs and deviants. Erika Pearson, a Management Consultant for Ernst and Young, moderated a panel about finances. This was probably the most interactive panel of the day as students were prompted to speak about their economic goals while panelists offered them insight on how to reach those goals. Asking questions was demanded of the crowd throughout every panel, turning instructional sessions into town hall-style discussions. During breaks in between panels, many attendees got a chance to catch some of the panelists and even the keynote speakers in the hallway to further discuss the myriad of concepts presented throughout the day. On a break, I got a chance to speak to Dr. Marks about the theme of the conference and its significance. “The theme this year is around narrative change. What is the story we tell ourselves about Black and Latino males? For most Americans, that story is negative. So, what we want to do is to challenge that and say okay, what is the story? How did it form? How accurate is it? And finally, how do we change it?”

When discussing the importance of the Black Male Initiative Conference, keynote speaker Mychal Smith spoke frankly about the perceived need to attach an inordinate level of urgency to such an event. “It’s never not important. I’m often bothered by the language of the now more than ever talk, or because things are more present in our minds or more pushed to the forefront via media and headlines that these issues haven’t always existed, or that these issues were less important before. It’s always important. It’s always important to be doing this kind of work where you are coming together in the community to think critically. And I think that more than anything else we can do that in the community together. And that’s what BMI is fostering.”

The students are the focal point of the conference and the information and resources presented to them will enhance not only their educational experience but will serve as support as they move into the various fields of employment. A group of young men from Union County College in Cranford, New Jersey came to the conference to be a part of the discussions and they were more than satisfied about the information they received. Terrell Germany, 18, said he enjoyed the panel on finance. “I learned about finance, how to budget your life, you know? Being so young and having a job, you want to start now by establishing a good ground base of finance. You want to have a surplus. When you’re older, you don’t want to be in debt.” Terrell’s classmate, Amir Malcolm, 18, agreed. “We have to educate ourselves. A lot of times in our communities financial literacy isn’t taught to us. So, it is our responsibility to go out and to seek that literacy and that knowledge.”

As I left the conference, I found myself walking behind a group of young men, and those young men were discussing some of the things they learned at the conference. If the goal of the Black Male Initiative is to introduce concepts and ideals to young Black men with the hopes of enhancing their educational experiences and to prepare them for life, then this conference certainly succeeded in that mission.