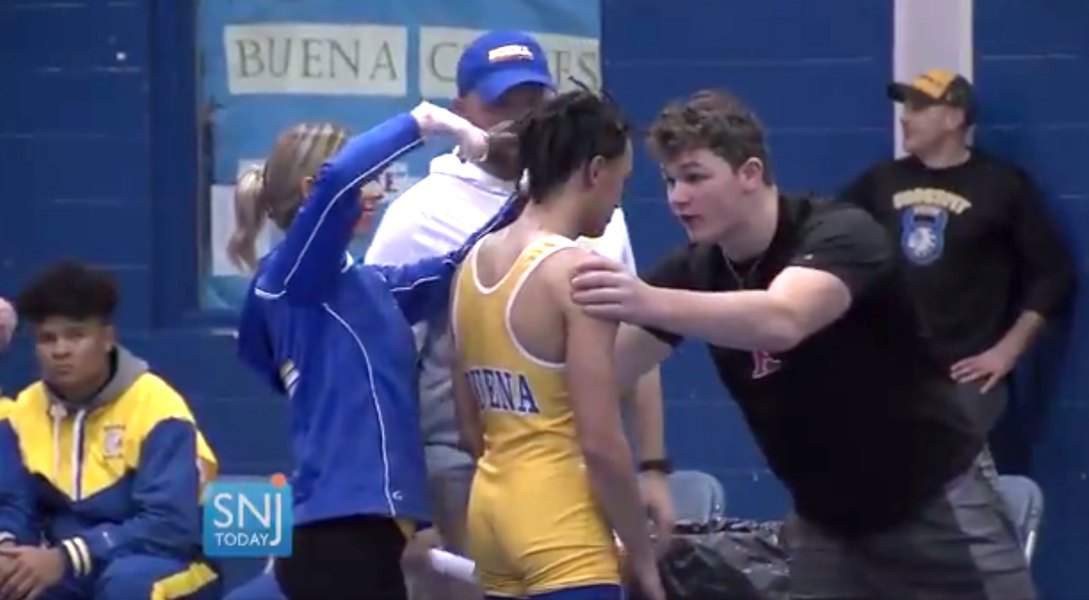 Among the trending news this week was the story of the New Jersey High School wrestler who was forced to cut his dreads in order to compete in a match. A referee wouldn’t allow 16-year-old Andrew Johnson to compete with a headband pulled over his dreadlocks. The referee gave Andrew the ultimatum to either cut his dreadlocks or forfeit the match. Andrew chose to have someone cut his locks. He eventually won his match, but pictures and video of the incident hit social media and created a firestorm of controversy over why this child was made to cut his hair.

Fingers are pointed squarely at referee Alan Maloney. Reports state that Maloney was actually late for the weigh-ins for this event, which would have been his time to inspect the gear and headwear of the wrestlers. Reports also state that it was he who demanded that Andrew either cut his hair on the spot or forfeit. And while oversight organizations investigate the incident and social media activists drive this story as the latest example of white supremacy in action, my first questions about what happened had nothing at all to do with the referee. Here were my questions:

Andrew Johnson (Submitted
by the Family)

I was raised in the Village of Brooklyn at a peculiar time, post-civil rights and pre-digital age, where the generation before me passed down information, not in the form of memes or status updates, but in real time in real life. I was raised around devout Christians and Hasidic Jews, 5th-generation Italians and 1st-generation Caribbean families, Pan-Africanists, Five-Percenters, NOI Muslims and Sunni Muslims. Everyone around me had their own way of existing, their own self-styled wisdom which defined them. Defining yourself was very important in those days, even as children, and how the world viewed us was important. So, I get that I look at this wrestling incident with innate bias, knowing full well that at 16 years old, no referee would’ve been able to pressure me into doing anything I didn’t want to do. I just wasn’t raised that way.

However, I cannot in good faith blame this child for lessons he wasn’t taught, perspectives that simply were not instilled or reinforced in him by his parents or his community. Parents these days don’t parent the way they used to. This digital age is flush with access and data, but its light on seriousness. Phones raise kids now, not parental edict. Tolerance has made us all soft and flabby, that lean look of fundamentalism can only be found these days in “Throwback Thursday” posts. If you aren’t raising young warriors, then who’s going to protect your village after you’re too old to? I’ll ask another way: If we aren’t raising Black children right now to recognize manipulation – racial or otherwise – then what will become of our communities in the days to come when guys like you and I are old and dying away? Yes, this kid is a wrestler, but who is preparing him to wrestle with society’s ills?

This whole ordeal has given me a renewed appreciation for Kwanzaa and the Nguzo Saba. I’ll tell you why. I’ve celebrated Kwanzaa for a long time now, and during the last week of every year my family and I go through the Nguzo Saba; reciting, discussing and even singing songs about the Seven Principles. It never occurred to me how internalized those principles have become with regards to my life. I sat in the audience last week as my daughter performed at her Kwanzaa event for her school, and as they sang about the Seven Principles they got to “Nia” and the song goes, purpose…purpose…I HAVE A PURPOSE. My daughter is 3. To hear her scream those words makes me feel so good because she is proclaiming that her journey has a purpose even before her journey truly begins. Unity. Self-Determination. Collective Work and Responsibility. Cooperative Economics. Purpose. Creativity. Faith. Show me the lie! Show me an attribute among these principles that isn’t positive and empowering! You say them enough, year after year, and they become you. These principles become who you are, how you see the world, how you treat others and how you treat yourself.

Kwanzaa is important. It’s more than just a holiday. It is pertinent information codified into a celebratory paradigm so that through food, drink and coming together we can remind our children and ourselves how to live with one another and also how to live in the world.

As long as there are referees like Alan Maloney, there will be a need to empower our children so that they will be ready, willing and able to speak truth to power. The Nguzo Saba can provide the proper foundation. That’s why Kwanzaa!

How to Survive. Where are Our Boundaries?

The Era of Fake News: Polluting Our Info Pool