When We See Us
Advertisement 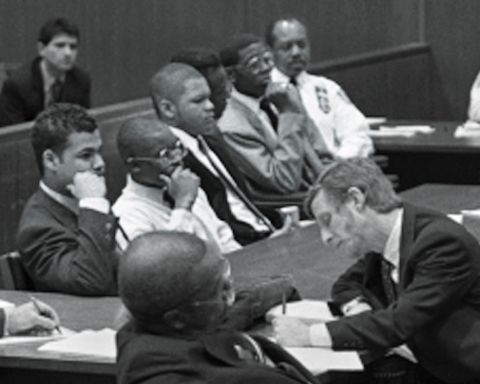 Last Thursday evening I traveled up to Albany to present at the “My Brother’s Keeper” Annual Symposium. I was the last presenter scheduled for Friday afternoon. My workshop was titled Express Yourself and it focused on the importance of self-expression. In the largest meeting room in The Egg in the Empire State Plaza, over 200 high school-aged Black and Hispanic boys spent the entire day listening to empowering messages from educators and speakers from across the entire State of New York.

The boys, they were engaging, happy. Some were listening with the intent of responding through question. Some were at their tables joking around. They all were appreciative of the investment being made for them, aware that there were worse options that they could find themselves in if circumstances were different. We talked about our fears. One boy said he feared becoming homeless. Another boy said he feared dying before he made his mark. Collectively, we all understood the fears spoken aloud, knowing that at some point we have each shared in them.

After my workshop was over, as the boys began exiting The Egg, loading onto buses or walking back to their hotel, many of them came up to me thanking me for my words of encouragement. They shook my hand, they made eye contact, they showed that the path that led them into the MBK Symposium had also provided them with some necessary tools of engagement. I thanked them for being receptive, shared with them my social media information for them to keep in touch and I wished them well on their journey home. That Friday night, I got on a bus and came back to Brooklyn. After settling in, I turned on my Netflix to watch the Ava DuVernay project, When They See Us. The movie had been on my radar for some time; my friend Marsha Stephanie Blake plays the role of Antron McCray’s mother in the film. We spoke a couple of months ago about the film and she promised that it would be a poignant piece, a must-watch. So, after coming home from an empowering experience with Black and Hispanic boys, I sat down to watch a movie about how the criminal justice system rendered a group of Black and Hispanic boys powerless.

When They See Us is the story of “The Central Park 5,” a group of boys that were accused back in 1989 of raping a jogger in Central Park. The first episode takes you to that night, April 19, 1989 and shows you how the boys wound up in the park and eventually into police custody. That first episode was very difficult to watch. I remember “The Central Park 5.” I was 13 years old on April 19, 1989 and I remember when they were arrested and accused, when they were labeled with the term “wilding,” when an entire city was willing to depict them as animals. What I did not know back then was how the detectives manipulated these young kids into admitting to a crime they didn’t commit. I didn’t know about the bully tactics. I didn’t know about all of the lies and deceit. I didn’t know how victimized these children were, literally kidnapped off the streets and physically and mentally abused by corrupt officers until their will was broken. It was a difficult thing to watch. I kept thinking about the boys at “My Brother’s Keeper.” As bright and precocious as they were, they, too, could be pulled from the streets and broken by overzealous police. They, too, could be accused of something they didn’t do in a world where society already assumes their guilt. Even with all of the great workshops and empowering discussions, the truth of the matter is that the boys that I met with in Albany on May 31, 2019 are really no safer than the young boys from Harlem were on April 19, 1989. Thinking about that was unnerving. It made me wish that I had seen this movie before talking with those young boys. My conversation would’ve been different. I probably would’ve made them watch the movie just so that they would know.

The most despicable thing isn’t what happened to Kevin Richardson, Antron McCray, Yusef Salaam, Raymond Santana and Kharey Wise. The most despicable thing is that 30 years later young Black boys are still viewed as prey to certain sectors of society, and what happened to the Central Park 5 could actually happen again, even knowing all that we know now. My MBK workshop has been in my head ever since I watched that movie. I can’t stop worrying about my Black and Hispanic boys.

What’s In A Name?

Thinker’s Notebook: Like a Church on Monday… No Service