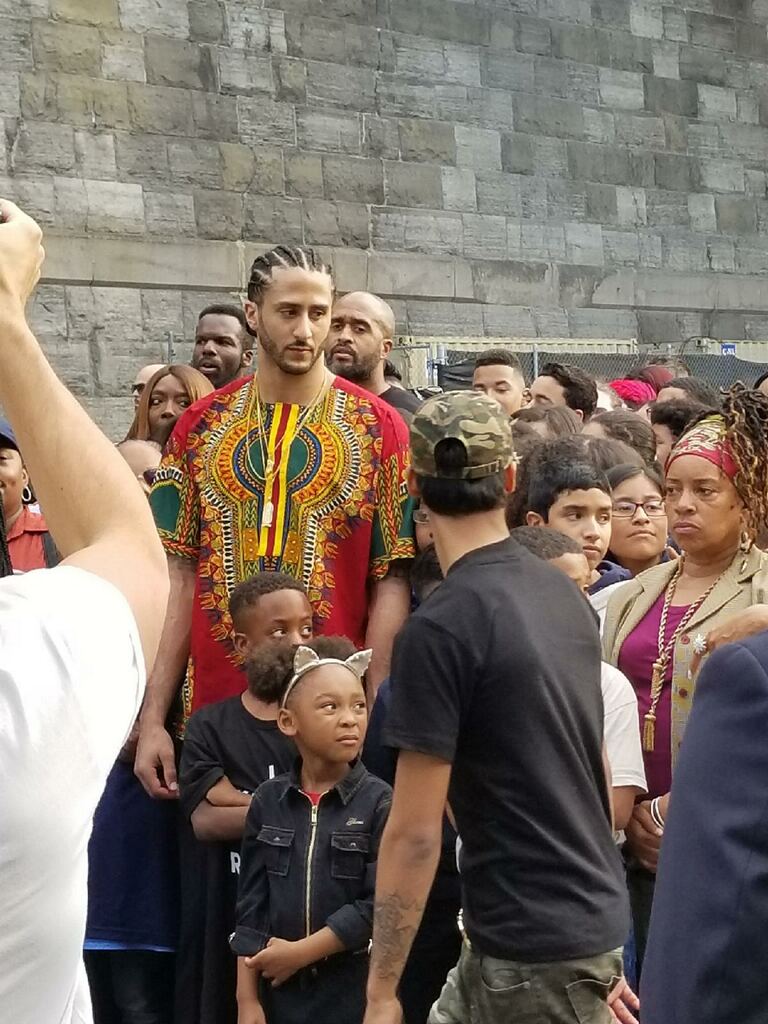 For this week’s column, I humbly present to you a story about a regular guy from Brooklyn and his quest to meet with the most polarizing name in sports today, Colin Kaepernick. This is a fascinating story, filled with suspense, plot twists and a cliffhanger ending that will leave you on the edge of your seat.

Spoiler alert! The regular guy from Brooklyn is me. Now, let’s begin.

Colin Kaepernick with Black Veterans for Social Justice founder Job Mashariki. Kaepernick has donated $50,000 to the organization as part of his million-dollar pledge

During the 2016 football season, San Francisco 49ers Quarterback Colin Kaepernick made the decision to kneel during the singing of the national anthem before the start of the game. His decision was an attempt to bring to light many of the injustices that people of color continue to struggle with in this country, his ire specifically focused on the unwarranted and unnecessary killings of Blacks at the hands of the police. You see, in 2016, there were 39 incidents of unarmed Black men being murdered by police officers. Terence Crutcher was killed by police after his vehicle stalled on the road in Tulsa, Oklahoma. He was shot in the back while walking towards his car with his hands raised in the air. Philando Castile was killed in Falcon Heights, Minnesota while sitting in the passenger seat of a car his fiancée was driving. They were stopped for a busted taillight. His girlfriend’s 4-year-old daughter was in the backseat when the officer killed him. The day before Mr. Castile was killed, Alton Sterling was murdered by officers in Baton Rouge, Louisiana. He was already detained and lying prone on the ground when an officer shot him dead. It was murders like these that compelled Kaepernick to take a stand by kneeling for the anthem.

By now, you know about how Kaepernick’s actions were received by this nation. You probably know that he opted out of his contract with the 49ers after the end of the season, and that he has not been acquired by any team this year, even though one could argue that he is the best QB without a job in the league. What you might not know, however, is that Kaepernick’s stance on injustice was not just relegated to on-field demonstrations. In October 2016, Kap began his “Million Dollar Pledge”. His mission was to donate one million dollars plus the proceeds from his jersey sales for that year to organizations working in oppressed communities–$100,000 per month for 10 months. This pledge wasn’t publicized, probably because the narrative was too busy trying to paint him as anti-American.

In January 2017, as part of his Million Dollar Pledge, Kap donated $25,000 to Black Veterans for Social Justice. BVSJ is a nonprofit organization based in Bed-Stuy that works to service veterans and the community at-large. The organization was founded by Job Mashariki in 1979. Job is my father-in-law. When I heard about the donation, I was both excited and proud for the organization. I can speak clearly for the work BVSJ does in our communities, so it was an honor to know that Kap and his organization considered BVSJ enough to donate.

During that 2016 football season, Kap was teammates with Antoine Bethea. Antoine is a friend of mine, his wife and my sisters are dear friends. When I heard about the donation, immediately I thought that it would be a great idea to bring Kap to Brooklyn so that he could see his dollars being put to use. I contacted Antoine’s wife Samantha and told her what I was thinking. She spoke to Antoine about it, and the two of them sent me the phone number and e-mail address to Cat Collins. Cat is a media consultant that works with Kap. I contacted Cat and let him know what I was thinking. Cat liked the idea and told me that he’d work on making it happen for me.

That was in January.

As the months and the seasons changed, Kaepernick’s demonstration and subsequent job search began to play out in the court of public opinion. Teams weren’t checking for him, choosing to either stand pat on their QB roster, or to sign players who don’t begin to compare to Kaepernick talent-wise. Those paying attention began to wonder, was the NFL blackballing Colin? All summer, Cat and I went back and forth through e-mail, working to try to get Kap to Brooklyn. It didn’t work once because he had a trip to Africa. Another time, he was dealing with preparing himself to be scouted by teams. Always a task or engagement kept us from getting him here. I understood. Colin’s brand, his image and his stance were beginning to magnify and expand beyond the reach of courtesy. He was becoming the poster child for social awareness, bigger than our small organization could reach. I was beginning to think that it might not happen.

In August, Our Time Press co-founder Bernice Green sent me an e-mail that reignited hope. Her e-mail said that I would be covering a press conference organized by 100 Blacks in Law Enforcement, Councilman Jumaane Williams and retired Detective Frank Serpico. The press conference would be an official show of support for Colin Kaepernick, and was to be held right at Brooklyn Bridge Park. Bernice was situating an opportunity for me to have one-on-one time with Kap before the presser. This was the opportunity I’d been waiting for. Kap would be in Brooklyn and I’d get to not only thank him personally for his donation, but I’d get to interview him for a story. Win-win never sounded so sweet! I e-mailed Cat the night before the press conference to let him know that I’d be there so that he could prepare Kap to meet with me. That morning of the press conference, on my way over to the park, I checked my e-mails. Cat had sent a reply. It said that Kaepernick would not be at the press conference. I began to feel like Captain Ahab, wandering the blue sea obsessed with crossing paths with Moby Dick. Maybe my goal was too lofty. Maybe my gratitude to Kap, not just for his donation but for the position he took on injustice, maybe it didn’t matter.

As summer ended and the new football season began, I stopped entertaining the idea. Obviously, if Kap was still interested in playing the game, he’d be using this time wisely. He’d be working out and studying film and no way would he have the time to entertain my idea. Then the season began and those who were dissatisfied with Kap not being signed to a team called for a boycott of the league. Then our idiot-in-chief Donald Trump had the audacity to call the players who were continuing Kaepernick’s protest sons of bitches, and that sparked a wave of new protesting from both sides of the argument. What began as a spark of awareness has erupted into an uncontrollable forest fire fueled by hate and ignorance. People are attacking other people in the stands of games for not saluting the flag. Other people are outraged at players for disrespecting the military and the flag with their protests, never mind the fact that it was a Navy Seal who gave Kap the idea to kneel in protest in the first place. And Kap still hasn’t been signed. The whole thing has been corrupted, and now instead of just wanting to thank Kaepernick for his stance, I’m more concerned about the climate that exists now that his stance has been hijacked and altered to fit the narrative of the weak and insensitive. These are precarious times.

Last Friday, I received a call from Wendy McClinton, the CEO of BVSJ. Wendy is the kind of person that brings light into the darkness. If you see her name pop up on your phone, you’re more than likely going to smile. So as I answered the phone smiling, she said something that I didn’t expect to hear. She said, “Marlon, we need a couple of people to go uptown to represent the organization at a photo shoot for Colin Kaepernick. Are you available?” I’m not going to lie, my first thought was, “Here we go again. Another whale for Ahab to chase”. But I said, of course I’m available, and wanted to know where and when. Wendy relayed all of the information to me and she sent a letter of thanks to be given to Kaepernick personally. Once I saw Cat’s name on the paperwork, I began to think that this was the real thing. Five of us took the trip uptown – myself, three employees of the organization and the founder, my father-in-law Job Mashariki. The shoot time was 3:45pm. We left Brooklyn at 2:00pm, and by 3:40, we were only at 85th Street and Broadway. Traffic in the city is ridiculous. I called the contact and told her that we were on our way, just running late due to traffic. Her response was for me to hurry because they were setting up for the shoot and wouldn’t wait. Was I going to lose this time because of traffic? We rushed as quickly as we could to the meeting point. When we pulled up, we could see the crowd formed for the shot. There was a tall man in a dashiki standing in the front of the crowd as if the crowd were his entourage. The man was Colin Kaepernick. I hopped out of the van and ran about half a block to make it into the shot. Amassed behind Kaepernick were children from a nearby school, as well as other representatives from organizations he’s donated to. Just like that, I was standing two people away from Kap, a part of a photo shoot for a well-known magazine. Talk about finding Moby Dick!

When the shoot was over, and after the kids got their autographs, I introduced myself to Kap. I thanked him for his donation and told him what the money is being used for. I thanked him for his service to our community and told him that we support him in the County of Kings. He thanked me for taking the time to come to the shoot and we spoke a little about who was better-looking. I said that I am, and I believe that. It was a good conversation. I told him that if he needed an extra wide receiver to practice with, I’m available. His look said thanks, but no thanks. We posed for some pictures and then I introduced him to Mr. Mashariki. Kap was very endearing. He listened to everyone talking to him and responded with genuine thought. After a few minutes, his team rushed him into his vehicle and we got back into ours. It had been 10 months in the making, but I was finally able to shake Kap’s hand and to thank him. His decision to kneel has blossomed into this entire investigation into our nation’s ideals and values, an internal audit of our country that was much-needed and very overdue. And though it seems at times that we as a people might drown in the severity of these issues, just like Ahab did when he finally came face-to-face with Moby Dick, I can assure you that we will not. In fact, when it’s all over, we will all be better because of it.

I still haven’t gotten him to Brooklyn though. Maybe I’ll e-mail Cat this week.

The Thinkers Notebook by Marlon Rice