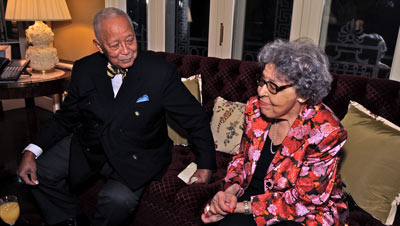 David Dinkins
Mayor David Dinkins was a gentleman. He was courtly avuncular and, like his mentor and compatriot Percy Sutton, always impeccably dressed. He was one of an extraordinary group of men, Basil Paterson, Percy Sutton and Charlie Rangel, the “Gang of Four,” who dominated Harlem politics for decades.
I first met the then-future mayor, when his apartment was directly across the hall on Riverside Drive at the end of a corridor on the 17th floor in the 1960’s. Whenever I’ve seen him in the ensuing decades, I would sidle up to catch his eye, and get a “Hiya, buddy,” and a smile of recognition from the, by then, Mayor of New York.
At the time, he was the mayor who had prime contractors scrambling to fulfill the minority hiring goals that he had set. He was a trailblazer in the public eye and for me he was an inspiration.

New York Education
Now that schools have closed again in New York City, we have to ask what has been the effect of the Coronavirus pandemic on the equality of educational development of the African American child relative to children in other countries, where, based on international ratings, they already have a running start?
Early reports are that the children are not doing well at all. Other countries like China, are continuing to grow any country’s greatest asset, an educated population, while here in Brooklyn, our children, already at a disadvantage, will have lost a year or more in the classroom. This is a matter of national security and we hope the next administration treats it as such. But first Jon Ossoff and Raphael Warnock must win the Georgia senate seats, then we will have a better idea of how close to that ideal is possible.

Runoffs in Georgia
The Republicans are showing us exactly why the Democrats must win both senate seats in Georgia with Jon Ossoff and Raphael Warnock. Even out of office, Trump will be in control of the mob-like Republican base, and therefore he will control Republicans in congress, at least until Manhattan District Attorney Cyrus Vance has him in a holding cell at Rikers on bank and insurance fraud.
For Biden to get his policy agenda enacted, and for African Americans to get what is owed for deciding the election in his favor, we need control of the senate. We’re in it now. Senate Leader Mitch McConnell, who has not even recognized Joe Biden as President-elect, or Kamala Harris as Vice President-elect, will not forget who gave Biden the Primary votes, and now the Presidency. He will not be our friend. We have to deprive him of his gavel.
The Democrats need to first win these two senate seats, and then they need to go bold. To take the mob away from Trump, they need to attack gerrymandering, so that candidates will be forced to appeal to a broader spectrum of voters, and the extremist-vote will be honestly diluted.
And if necessary, pack the court. Why not? The Republicans packed the entire federal judiciary including the Supreme Court with conservatives. At this point of counting, over eighty million people have seen that the Republicans have no ethics, or moral compass, and they don’t play fair. So yes, add four more judges to the court and make Washington, DC the 51st state. What the Republicans have taught us is that if you have the power to do something, do it.
Additionally, Biden, Harris and all of us need to go after voter suppression, big time, because that success is what will cement in all of the above. The Trumplicans know what’s at stake, and we’ve seen they’ll stop at nothing to hold onto power. They’re gearing up their army and we have to get out our own “silent majority,” the Black, the Brown, the not-a-white supremacist. All together, with enough registered voters at the polls, we are a non-violent army of overwhelming numbers and we must vanquish them in the next round of elections. It may be our last chance, as Trump is threatening to run in 2024.

American Leadership Has a New Look

Quest to Save America’s Future DESTINATION: GEORGIA for OSSOFF and WARNOCK ELECTIONS in JANUARY 2021