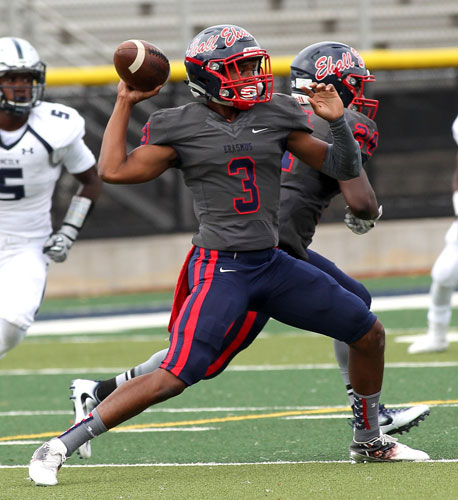 Last week we said good-bye to the summer of 2016. A summer that brought us some amazing games. Fall is here and there’s only one sport that comes to mind…..football. One of the high school teams Brooklynites should have an eye on this season is the boys from Erasmus Hall. If you didn’t believe the hype, well their performance this past Saturday, led by quarterback Oniel Stanbury, definitely turned some heads.

With poise and confidence, Stanbury aired out the ball at will leading his team to a 24-6 victory over the Lincoln Railsplitters, which marked the team’s first loss of the young season. It was also a statement-like game for the Dutchmen. The past few seasons the team has been known to have a ground-and-pound (run the ball first) mentality on offense. This year the team is looking to create havoc on opponents by airing the ball out. Stanbury attacked Lincoln’s secondary defense early and often and started out by connecting on a 51-yard touchdown pass to teammate Aron Cruickshank. Stanbury finished the game with 138 all-purpose yards that included a four-yard touchdown run. The Lincoln squad had a few opportunities to make it a game, but Erasmus’ defense held its own and made things difficult for the Railsplitters quarterback Faruq Shittu. The team tied a bow on their victory with a couple of fourth-quarter touchdown runs by Cruickshank and teammate Jean Claude Kesler.

It was a big win for the program, however, the team knows they have much work to do and it is not the time to be making parade-like plans just yet. You can bet on this fact: if they can put it all together by running the ball and Stanbury continues to stay in the groove that he’s been in throwing the ball, and with a steady defense, the Dutchmen can very well be marching towards their goal in capturing a City Championship!

Sports Notes: (NFL FOOTBALL) The Giants fell short this past week to Washington after a costly penalty that put the Redskins in field goal range to seal the victory. The G-men will now head to Minnesota for a Monday night showdown against the surprising 3-0 Vikings. The New York Jets, with quarterback Ryan Fitzpatrick, is looking to move forward from the nightmare of a game that saw him throw 6 interceptions in a 24-3 loss to the Kansas City Chiefs. Things do not get easier for Gang Green as quarterback Russell Wilson and the defense known as the “Legion of Boom” and the Seahawks come into town to battle the Jets.

I want to take time to recognize two athletes that the sports world lost on Sunday. Early Sunday morning it was reported that Miami Marlins ace pitcher Jose Fernandez, 24, was killed in a boat accident. Fernandez was definitely on his way towards a successful career as he was already recognized as one of the best young stars in the game of baseball today. His teammates, as well as the Cuban community, were completely stunned. It has truly been a sad week for baseball. Monday night’s game against the Mets, the team honored Fernandez by wearing his No.16 jersey and leaving their caps on the mound after an emotional game. The golf world took a huge loss too on Sunday night with the passing of Arnold Palmer. Known as the “King of Golf”, Arnold Palmer was 87. We here at Our Time press want to send our deepest condolences to both families.