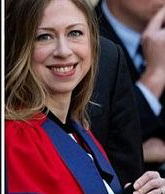 As reported on ABC News:

After President Donald Trump responded to criticism of his daughter Ivanka Trump sitting in on a meeting at last week’s G-20 Summit by tweeting about Hillary and Chelsea Clinton, the former First Daughter tweeted a reply of her own on Twitter Monday morning.

President Trump wrote that if Chelsea Clinton had been “asked to hold the seat for her mother, as her mother gave our country away, the Fake News would say CHELSEA FOR PRES!” The president was referring to the attention given to Ivanka Trump’s presence alongside G-20 leaders when she occupied his seat after he left for bilateral meetings.

In response, Chelsea Clinton tweeted, “It would never have occurred to my mother or my father to ask me,” adding, “Were you giving our country away? Hoping not.”

While members of a leader’s delegation are occasionally called upon to sit in during such summits if the leader must be elsewhere, Ivanka Trump’s presence amplified the ongoing criticism by some of the role of the president’s family members in his administration. Both Ivanka Trump and her husband, Jared Kushner, serve the president as unpaid employees as an adviser and senior adviser, respectively.

Last week, a White House official told ABC News, “Ivanka was sitting in the back and then briefly joined the main table when the president had to step out and the president of the World Bank started talking as the topic involved areas such as African development, areas that will benefit from the facility just announced by the World Bank.”

According to the BBC:

Donald Trump has defended his son over a meeting with a Russian lawyer, Natalia Veselnitskaya, during his presidential campaign, calling him “open, transparent and innocent”.

He tweeted hours after Donald Trump, Jr. spoke to Fox News about the meeting he was told would offer Kremlin-linked information about Hillary Clinton.

Critics accuse Mr. Trump, Jr. of intent to collude with the Russians, and believe he may have broken federal laws.

Mr. Trump, Jr. told Fox News the meeting was “such a nothing”.

However, he accepted he should have handled it differently.

Earlier in the day, Mr. Trump, Jr. had released the e-mail exchange that brought about the meeting after being informed the New York Times was about to publish it.

US officials are investigating alleged Russian meddling in the US election.

Since he was elected, President Trump has been dogged by allegations that Russia tried to sabotage Mrs. Clinton’s campaign.

He has denied any knowledge of this and Russia has also repeatedly denied interfering.