The Legacy of Lynching: Confronting Racial Terror in America, July 26 through September 3
Advertisement 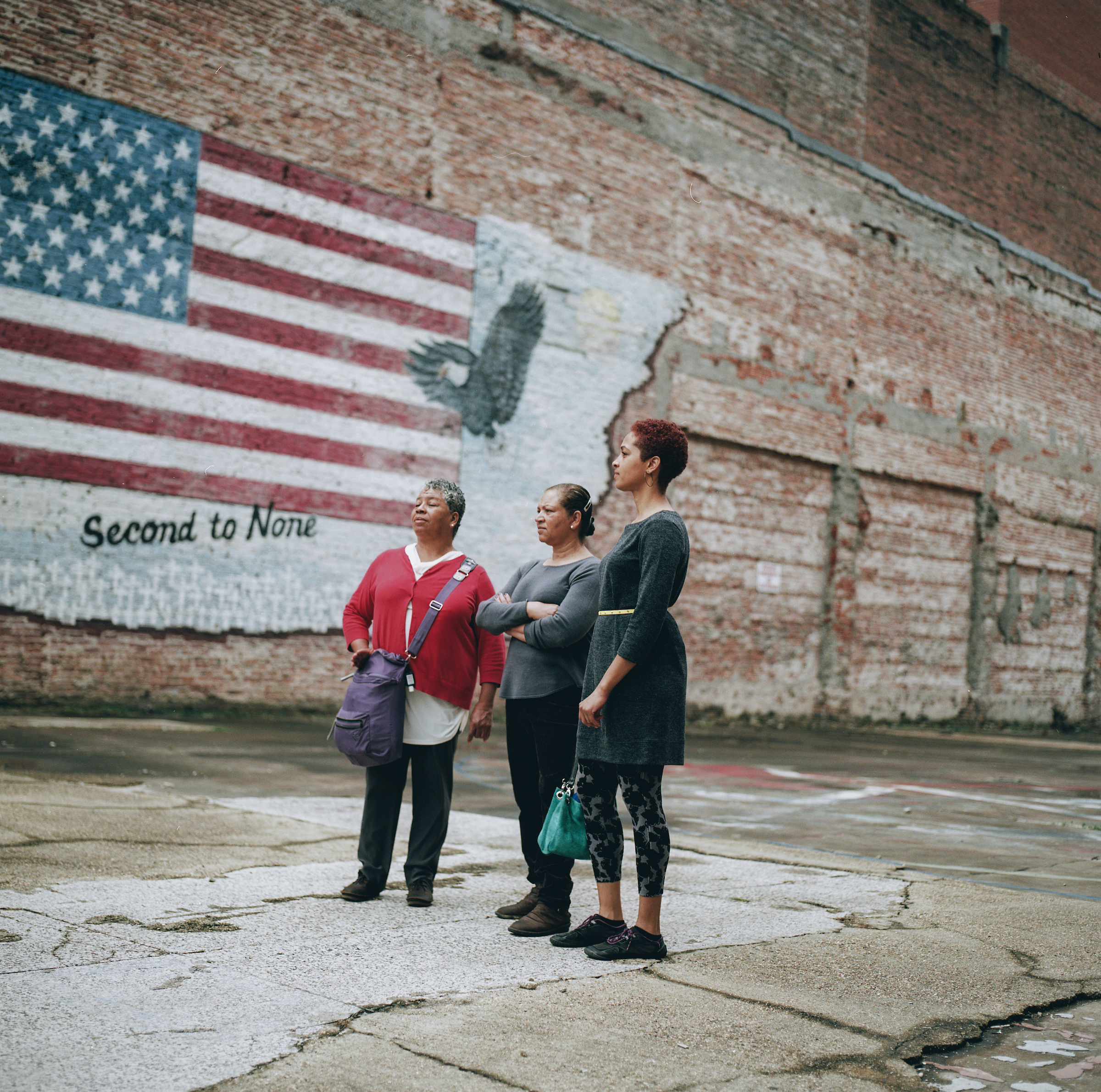 Bryon Stevenson is the founder and Executive Director of the Equal Justice Initiative in Montgomery, Alabama

The Brooklyn Museum is proud to join forces with the Equal Justice Initiative (EJI), headed by acclaimed public interest lawyer and MacArthur Foundation “Genius” recipient Bryan Stevenson, and Google to present a timely exhibition: The Legacy of Lynching: Confronting Racial Terror in America. On view from July 26 through September 3, the exhibition presents EJI’s groundbreaking research on the history of racial violence in the United States and its continuing impact on our nation to this day.

The exhibition will include video stories featuring descendants of lynching victims, a short documentary, photographs, an interactive map presenting EJI’s research, and informational videos featuring Bryan Stevenson. The content on display in the museum can also be viewed on http://lynchinginamerica.eji.org, an interactive platform that EJI recently launched with support from Google that digitizes their research on the more than four thousand racial terror lynchings of African-Americans between 1877 and 1950. This work underscores the profound effects of the racial terror committed against Black people and Black communities, which continue to shape our nation today.

The exhibition also presents materials from the Museum Library and Archives on the institution’s support for efforts against lynching. They include a 1935 pledge by Museum Director Philip N. Youtz supporting the NAACP’s anti-lynching art exhibition as well as documents from a benefit art auction and exhibition for the NAACP Legal Defense Fund that the museum hosted in 1963. More recently, the museum presented Bryan Stevenson in a conversation with death row exoneree Anthony Ray Hinton in 2016 as part of the ongoing program, “States of Denial: The Illegal Incarceration of Women, Children and People of Culture”, organized by Elizabeth A. Sackler and the Elizabeth A. Sackler Center for Feminist Art at the Brooklyn Museum. The museum has also held numerous exhibitions on related topics including Witness: Art and Civil Rights in the Sixties, Agitprop! and Sanford Biggers, among others, including We Wanted a Revolution: Black Radical Women, 1965-85, currently on view.

The Legacy of Lynching: Confronting Racial Terror in America will include a special public program featuring Bryan Stevenson, artists Glenn Ligon and Sanford Biggers, Elizabeth Alexander, poet and Director of Creativity and Free Expression, Ford Foundation on Tuesday, July 25 at 7 pm. Admission is $25.

By highlighting the historical impact of systemic racism in our country, the exhibition is conceived to raise awareness for EJI’s forthcoming Memorial to Peace and Justice in Montgomery, Alabama. Opening in 2018, the memorial will be the country’s first-ever national monument to commemorate the more than four thousand black men, women and children who were lynched and murdered between 1877 and 1950. EJI also plans to open an accompanying racial justice museum that will trace a direct line between slavery and mass incarceration.

To approach this topic respectfully, the exhibition focuses on personal stories. It does not contain explicit photos. In order to appropriately acknowledge the subject of racial violence with the utmost care and sensitivity, the museum will provide a space outside the gallery for visitors to explore reading material and to reflect.

“Our nation’s history of racial injustice casts a shadow across the American landscape. This shadow cannot be lifted until we shine the light of truth on the destructive violence that shaped our nation, traumatized people of color and compromised our commitment to the rule of law and equal justice,” said EJI Executive Director Bryan Stevenson. “We all must engage this history more honestly.”

Bryan Stevenson continues, “Art has always been a powerful tool in getting a society to think more honestly about human rights and human dignity. Our great artists have often found critically important ways to speak truthfully about history and the human condition. It’s energizing to take on a difficult topic like racial terrorism surrounded by the bold insights of brilliant African-American artists”.

Anne Pasternak, the Brooklyn Museum’s Shelby White and Leon Levy, Executive Director, states, “When Bryan Stevenson and Google approached us in late May to co-produce this exhibition, we didn’t hesitate. Throughout its nearly two-hundred-year history, the Brooklyn Museum has never shied away from difficult but important conversations— the very conversations our audiences are having every day— including racial exclusion and inequality. We are proud to work with the Equal Justice Initiative in their fight to confront America’s painful past in order to educate and heal, and to contribute to a more empathetic and just society”.

The Legacy of Lynching: Confronting Racial Terror has been assembled and organized by a team of Brooklyn Museum curators, librarian and archivist, educators, designers in collaboration with the Equal Justice Initiative and Google.

Bryan Stevenson is the founder and Executive Director of the Equal Justice Initiative in Montgomery, Alabama. Mr. Stevenson is a widely acclaimed public interest lawyer who has dedicated his career to helping the poor, the incarcerated and the condemned. Under his leadership, EJI has won major legal challenges eliminating excessive and unfair sentencing, exonerating innocent death row prisoners, confronting abuse of the incarcerated and the mentally ill and aiding children prosecuted as adults. Mr. Stevenson has successfully argued several cases in the United States Supreme Court and recently won an historic ruling that mandatory life-without-parole sentences for all children 17 or younger are unconstitutional. Mr. Stevenson and his staff have won reversals, relief or release for over 130 wrongly condemned prisoners on death row. Mr. Stevenson has initiated major new antipoverty and antidiscrimination efforts that challenge the legacy of racial inequality in America, including major projects to educate communities about slavery, lynching and racial segregation. Mr. Stevenson is also a Professor of Law at the New York University School of Law.

Mr. Stevenson’s work fighting poverty and challenging racial discrimination in the criminal justice system has won him numerous awards including the prestigious MacArthur Foundation “Genius” Prize, the National Medal of Liberty from the American Civil Liberties Union after he was nominated by United States Supreme Court Justice John Stevens, the Public Interest Lawyer of the Year by the National Association of Public Interest Lawyers and the Olaf Palme Prize in Stockholm, Sweden for international human rights, among others.

He is the recent author of the critically acclaimed New York Times best-seller Just Mercy, which was named by Time Magazine as one of the 10 Best Books of Nonfiction for 2014, and has been awarded several honors including a 2015 NAACP Image Award.

About the Equal Justice Initiative

Founded in 1989 by Bryan Stevenson, EJI is a private, 501(c)(3) nonprofit organization that provides legal representation to people who have been illegally convicted, unfairly sentenced or abused in state jails and prisons. The Equal Justice Initiative is committed to ending mass incarceration and excessive punishment in the United States, to challenging racial and economic injustice, and to protecting basic human rights for the most vulnerable people in American society.

The Legacy of Lynching: Confronting Racial Terror in America is organized by the Brooklyn Museum and the Equal Justice Initiative with support from Google.