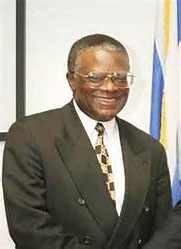 Today, on this sixth day of his death, I have composed myself and tried to find the appropriate words to say good-bye to an icon, Dr. Chika Onyeani.

I first read about his passing in a posting from my friend on Facebook, Afrikan Spot Editor and Publisher Isseu Diouf that simply said, “Rest in Peace”.

It was hard for me to believe at first and I then in-boxed Isseu to verify the truth about Dr. Onyeani’s passing. Indeed, Dr. Onyeani passed a couple of days ago in a hospital.

What was very telling to me was that I had no knowledge of his illness or admission into a hospital. The last time I saw Dr. Onyeani was on September 14, 2016 at 1 Police Plaza when he attended an invitational meeting on Ethnic Media along with other media colleagues to explore business opportunities within the New York Police Department. In typical Onyeani style, he had always advocated for the NYPD to do business with Ethnic Media.

As the God Almighty will have it, his recommendation was approved by the issuance of a request for proposals (RFP) that was announced on the same day of his untimely death.

No one, not even Dr. Onyeani, would have imagined his advocacy will continue to resonate with decision-makers even on his last day on this earth. May his soul rest in peace–AMEENA!

The sudden death of Dr. Onyeani caught a lot of his friends and people he worked with and associated with by surprise. Amongst these people were Ambassador Tete Antonio, the African Union’s Representative at the United Nations who was alarmed by the news. “Oh my God! could you verify the news” were his first comments. He later inquired about funeral arrangements so he can attend.

“He was a voice for the African Diaspora not only in America but the Continent of Africa as well,” Ambassador Tete Antonio added.

Brother Milton Allimadi, Publisher of Black Star News said: “May the ancestors welcome him. Brother Sidique, we lost an icon and champion of our struggle for our African Diaspora empowerment in this United States.” He immediately asked me to pen this tribute.

Professor Dr. Mohammed Nurhussein, National Chairman of the United African Congress (UAC) who succeeded Dr. Onyeani — he had been inaugural chairman and co-founder of UAC– after recovering from the shock suggested we all work on a fitting honor “for all he did and has done for the many voiceless and faceless Diaspora Africans in these United States”.

Mr. Africa Ogo Sow reacted: “The African Diaspora has lost a champion. Lost an icon and lost a great mentor and humanitarian that traveled many nautical miles across the Atlantic to promote the African Diaspora all over Africa. We will all miss his presence as our leader.”

Dr. Michel Cole, Executive Vice President of the United African Congress said: “Africa has lost a noble son. May he rest in peace.”

Gordon Tapper, diplomat, philanthropist and foundation leader summed it all up by saying: “African Diaspora constituencies have lost a giant and powerful advocate. May his soul rest in peace.”

These are a few comments that I received from my friends and colleagues that knew and worked with the late Dr. Chika Onyeani.

I can boldly and honestly state that I also had the honor and opportunity to work with Dr. Chika Onyeani for quite some glorious years in promoting the advocacy and empowerment of the African Diaspora constituency in the United States, including the Continent of Africa.

Amongst his pioneering accomplishments that I am intimately familiar with, allow me to list them for the public’s information and education as noted below:

Dr. Chika Onyeani co-founded and was the first National Chairman of the United African Congress and was even instrumental in registering the organization and finding a permanent office and home address for the organization.

That benefit is still enjoyed by the present leadership of the United African Congress. He introduced the organization to the diplomatic corps and pioneered the unprecedented efforts to consistently advocate for matters of human rights and good governance practices on the Continent of Africa.

Dr. Onyeani coined the term “Continental African”, thereby ensuring that Africans from the Continent of Africa now residing in the United States were proud of their own identity by encouraging them to be proud to wear their African garbs with pride. As the world knows, he hardly ever wore Western clothes; he, instead, dressed traditional as the proud Nigerian Chief he always was.

Dr. Onyeani presided over the first African Day Parade that was held on the Grand Concourse in the Bronx to demonstrate to America that Africans are here to stay as good neighbors and co-workers. He liked to say we can “speak for ourselves”.

This demand for African identity often got him into hot water with some of the powerful detractors who, in his view, were benefiting from African Diaspora invisibility by usurping their voices.

He often repeated the parable: “When a child grows up as an adult, that child has earned the right to wash his or her hand and sit at the table to eat with his or her elders.”

This was the point he drilled into many of us whom he mentored, trained and groomed to continue advocating for our brothers and sisters that were often the subject of discrimination and could not fight for themselves.

Dr. Onyeani was intimately involved in hosting the first Interfaith Harmony event at the Brooklyn Academy of Music that was organized by the UAC after the killing of Amadou Diallo by an NYPD officer. It was attended by then-Mayor Rudolph Giuliani and Commissioner Howard Safir. This event was very controversial but nevertheless helped diffuse some of the tensions following the killing. Dr. Onyeani presided over the critical dialogue events that took place between New York City legislative leaders and civil society.

Dr. Onyeani mentored many of us while also providing employment counseling and opportunities for many Africans that have today found their own voices and professions that allow them to serve their families and communities with excellence and distinction in these United States.

Dr. Onyeani always drew a line in the sand against dictators in Africa that held onto power for too long against the will of their people. Through his powerful editorials in the African Sun-Times, he excoriated corrupt rulers and praised good ones. His editorials played a role in generating opposition to and rejection of the candidacy of Uganda’s Dr. Specioza Kazibwe, who wanted to succeed the AU’s Dr. Zuma.

Some African diplomats praised him in private while echoing the sentiments of their dictatorial leaders in public. He often referred to them as “sellouts”.

With all said and done, we did not always agree on the direction on some critical issues; but never once did he hold even his detractors in contempt. In fact, he was always kind and encouraged those that occasionally disagreed with him to keep on “fighting for the common good of Africa no matter where they might find themselves in life”.

Even whenever we went for long periods without communicating, whenever I called these would be his first words: “Lord Sidique. How you do? You do fine?”

On my part, whenever he called I greeted him as “the Distinguished Chairman”.

Indeed, Dr. Chika Onyeani was first and foremost a family man; our African Chairman; Champion of African Diaspora Empowerment; Dean of African Media; author of the highly acclaimed book and best-seller “Capitalist Nigger,” deploring our dependence mentality; an Economist; the youngest Diplomat from Nigeria in the 1960s; Editor and Publisher of the African Sun-Times; and the host of the radio program “Straight Talk”.

Now he belongs to the ancestors.

The Hon. Sidique Wai is President/National Spokesperson for the
United African Congress (UAC).

Science: These youth of color are organizing to address climate change