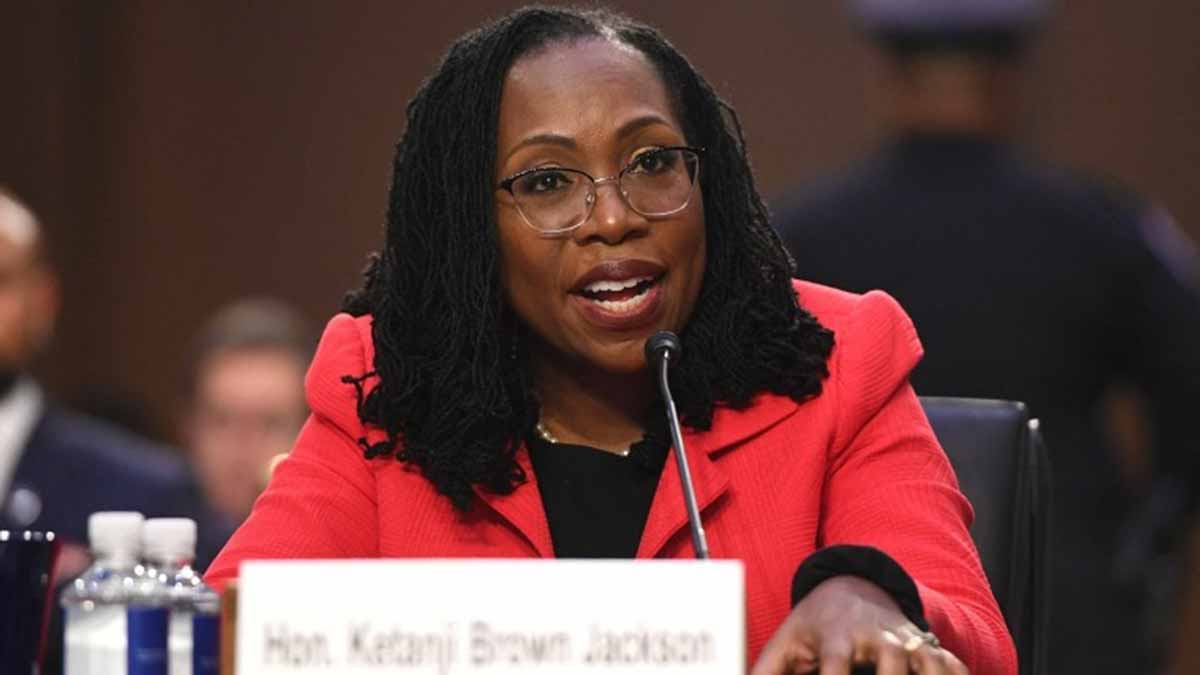 Gloria Oladipo
theguardian.com
The confirmation hearings of Ketanji Brown Jackson officially wrapped up this week after four days of extensive questioning, heated exchanges and other contentious moments.
But Jackson, who was questioned by Republican senators on a variety of issues, was widely praised for her patient demeanor and thoughtful responses.
With the hearings finally done, here are some of the best moments from Jackson’s hearing.

Ketanji Brown Jackson’s family
In her opening remarks, Jackson gave several shoutouts to her family, sharing gratitude and love for their support throughout her extensive law career.
Several members of her family were present for the almost 22 hours of questioning she faced.
Her husband, Patrick Jackson, and her two daughters, Leila and Talia, sat in the audience as she fielded questions from the Senate judiciary committee.
Patrick Jackson, husband of Judge Ketanji Brown Jackson, and their daughter Leila react as the judge answers a question from Senator Alex Padilla. Photograph: Elizabeth Frantz/Reuters
Of her husband of 25 years, she said: “I have no doubt that, without him by my side from the very beginning of this incredible professional journey, none of this would have been possible.”
She also spoke to her two daughters about the challenges of balancing work responsibilities with raising children.
“Girls, I know it has not been easy as I have tried to navigate the challenges of juggling my career and motherhood. And I fully admit that I did not always get the balance right. But I hope that you have seen that with hard work, determination, and love, it can be done,” said Jackson.
Her parents, Johnny and Ellery Brown, and younger brother, Ketajh Brown, were also present.
“My parents taught me that, unlike the many barriers that they had to face growing up, my path was clearer, such that if I worked hard and believed in myself, in America I could do anything or be anything I wanted to be,” she said.
She gave a special mention to her father, whom she credited as being her inspiration for entering law.
“My very earliest memories are of watching my father study – he had his stack of law books on the kitchen table while I sat across from him with my stack of coloring books,” said Jackson.
Johnny and Ellery Brown, who have been married for 54 years, were both raised in the Jim Crow south. After attending historically Black colleges and universities, they moved to Washington DC and worked as public school teachers.
Ketajh Brown, who is 10 years younger than Ketanji, graduated from Howard University and worked in the Baltimore City police department as an undercover narcotics recovery officer.
Ketajh joined the Maryland army national guard after 9/11, and later followed in his sister’s footsteps, also pursuing a career in law. Ketajh now works as an associate at the law firm K&L Gates in Chicago.

Prof Lisa Fairfax’s testimony
Lisa Fairfax, professor and co-director at the Institute for Law and Economics at the University of Pennsylvania Carey Law School, gave a heartfelt introduction of Jackson on the first day of confirmation hearings.
Fairfax, who was Jackson’s former roommate at Harvard University, shared personal stories of their friendship, including details of Jackson’s personality that were a touching highlight.
“There’s so much more to Ketanji beyond her brilliant mind. There’s her wonderful sense of humor, her gift of storytelling, her heart of gold that always shows up, from the first call you make for advice about your career to the first knock you hear on the door after learning you’re diagnosed with cancer,” said Fairfax.
Ketanji Brown Jackson’s former roommate introduced her on the first day of the hearings.
You never have to ask; she is always there. Above all, Ketanji is humble enough not to pretend she knows how to have it all, but she does know how to give it her all. And what she gives to her family, her friends, she also gives to the law and to this country,” added Fairfax.

Jackson’s message to youth of color
On the third day of confirmation hearings, Jackson was asked by the California senator Alex Padilla about advice she would give to youth of color who may be doubting themselves.
“What would you say, Judge Jackson, to all those young Americans, those most diverse generation in our nation’s history – what do you say to some of them who may doubt that they can one day achieve the same great heights that you have?” asked Padilla.
“The young people are the future and I want them to know that they can do and be anything,” responded Jackson, with emotion.
To underscore her point, she shared a story about feeling out of place as a freshman at Harvard, saying she felt very homesick.
“I was really questioning: do I belong here? Can I make it in this environment?” recalled Jackson.
But then, she said, a Black woman whom she didn’t known approached her and told Jackson to “persevere”.
So, Jackson said: “I would tell them to persevere.”

Senator Cory Booker’s viral speech
In a widely shared clip, Senator Cory Booker of New Jersey praised Jackson and her performance during the confirmation hearings, bringing the judge to tears as Booker declaimed that she had well earned her supreme court nomination.
Booker started by calling out the problematic line of questioning of some GOP senators, specifically about Jackson’s sentencing in child sexual abuse cases.
Booker pointed to a column from the right-leaning National Review that trashed the Republican senator Josh Hawley’s allegations that Jackson had been lenient as “meritless to the point of demagoguery”.
“There is an absurdity to this that is almost comical if it was not so dangerous,” said Booker.
He went on to name Jackson’s wide range of achievements, including balancing parenting responsibilities while working as a lawyer in private practice, and getting bipartisan support for her appointment to the DC circuit’s court of appeals.
Booker also emphasized the historic nature of her nomination. Mentioning Black figures such as Harriet Tubman and Constance Baker Motley, the first Black woman to serve as a federal judge, Booker said to Jackson: “Today, you’re my star. You are my harbinger of hope.
“You are worthy. You are a great American … I know what it’s taken for you to sit in that seat,” he said.

California reparations to be limited to descendants of enslaved people, taskforce decides

Judge Jackson is Steps Away From Victory…