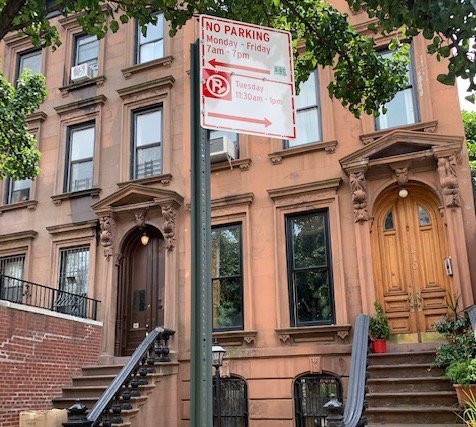 A new city pilot program doing away with parking on a residential street in Clinton Hill has residents already getting tow boots put on their cars and getting $185 tickets.

Sharon Holliday, who lives in a brownstone on Greene Avenue between Cambridge Place and Grand Avenue, said she first became aware of the parking change when her son saw Department of Transportation workers installing signage in front of her home last Wednesday, July 17,  reading, “No Parking Monday Through Friday from 7 a.m. to 7 p.m.”

When her son asked the workers about the sign, he was told it came from orders up high, Holliday said.

She then called City Council Majority Leader Laurie Cumbo (D-Fort Greene, Clinton Hill, Prospect Heights, Crown Heights), who represents the area, and was told the DOT installed the “No Parking” signage along Greene Avenue in Clinton Hill as part of a pilot program.

She then contacted Community Board 2, who had just been informed of the pilot program on July 10.

“DOT is pursuing a citywide program called ‘Residential Loading Zone Evaluation’ that’s intended to evaluate the potential effectiveness of residential loading zones. The purpose of the program is to provide curb space to allow for the pickup and drop-off of passengers as well as loading and unloading goods,” e-mailed CB 2 Community Assistant Crystal Jalloh to Holliday.

“The dedicated curb space for these particular activities are provided in hopes of reducing the number of double-parking-related incidents as well as unwanted standing behavior to create a safer, more efficient environment for all individuals on the road. The study is scheduled to occur for a year in order to adequately determine the effectiveness of the program,” she e-mailed.

Then yesterday, Holliday’s son woke to find traffic enforcement agents putting tow boots on cars with notices that “they need to cough up $185 within two hours or the cars would be towed and they would have to pay an additional $185 to get them out of the Brooklyn Navy Yard City Pound.”

A car gets towed shortly after a boot is put on the tire.

Holliday, who has lived on the block for 20 years, said she never saw a double-parking problem on the block, but she did say there is a corner bodega on the block and the avenue is also used for the B 52 bus route.

The change comes as residents in Clinton Hill have seen valuable residential parking already taken away through the installation of the City Bike program.

Cumbo responded that her office is continually exploring ways to improve safety throughout the district.

“The latest parking measures are a recognition of just that, safety. We will also work with the community to ensure that their lives are enriched and such safety measures are not necessarily an inconvenience,” said Cumbo.

“The pilot is part of a citywide residential loading zone program. The loading zones will work to provide curb space during daytime and evening hours to allow for the pickup and drop-off of passengers as well as loading and unloading of goods – helping to more efficiently utilize curb space and reduce the number of double-parked cars,” said Morales.

“DOT notified all affected Community Boards and elected officials before implementation and we will evaluate the effectiveness of the program over the next year,” said Morales.