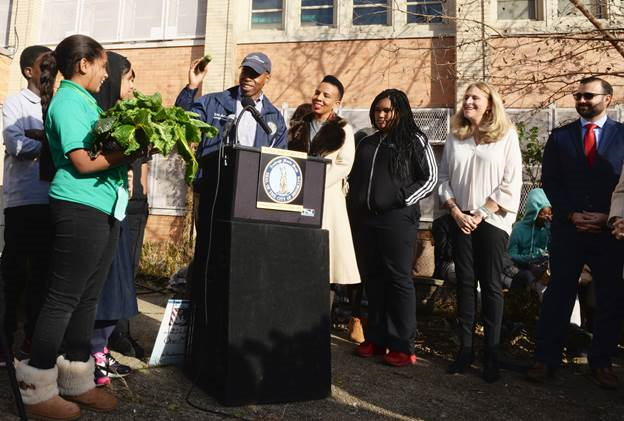 Thanks to Borough President Eric L. Adams spring has come early to Central Brooklyn. In fact, it started in the fall, six months ago when the BP announced major funding for STEM programs at several schools.

We visited some of those schools and many others, this past week as part of preliminary planning for an upcoming schools tree-planting initiative of the Magnolia Tree Earth Center of Bedford Stuyvesant.

The walk throughout District 16 and District 13 revealed some surprises, along with the latest announcement that District 16 is bringing in a new Brooklyn Green school to co-locate in the Granville Woods school building near The Weeksville Heritage Center.

But let’s go back six months to November 28, five days after Thanksgiving.

On that date, BP Adams unveiled over $7 million in his capital budget investment for this Fiscal Year (FY18) to add seven new schools to his “Growing Brooklyn’s Future” initiative. His progressive GBF program has brought cutting-edge technology to cultivate urban farming education in classrooms across the borough.

He made the announcement at the co-located PS 56 Lewis H. Latimer and Urban Assembly Unison School in Clinton Hill, where he and Councilmember Laurie A. Cumbo joined students in touring the site of a future state-of-the-art greenhouse jointly funded by Cumbo, to which Adams is allocating $2 million.

It was announced that the courtyard facility will have a growing capacity of 25,000 pounds of produce annually and will be constructed as an addition to the existing third-floor classroom farm at the school.

It is being created through a partnership with Teens for Food Justice, a non-profit organization that works with teens to build their knowledge of healthy eating and growing food. At the November 2017 press conference, Adams emphasized the positive impact that teaching young people about urban agriculture will have on their health and wellness as adults.

Jane (left) and Star Magnolias are two of the trees that will be given to some 25 public schools in District 16
and 13 by the Magnolia Tree Earth Center of Bedford-Stuyvesant as part of the organization’s annual April Earth
Month efforts to bring community awareness of the community as an urban laboratory and learning center. BP
Adam, architect of the “Growing Brooklyn Futures” movement, kicks off the effort, funded by DYCD and Councilman
Robert Cornegy.

Adams progressive and pioneering efforts are not only highlighting the potential of urban farming to revolutionize the borough’s relationship with food and the environment, and the importance of having children and young adults gain first-hand experience with the power of growing their own food. They are setting the example for cities around the country.

“Young people across the borough will now have the opportunity to learn about growing fruits, vegetables, herbs, and plants that will empower them to make healthy choices, taking care of their bodies and minds as well as our shared environment,” said Borough President Adams, four months ago. “This is about keeping Brooklyn’s kids at the forefront of innovation and growing their futures. Growing Brooklyn’s Future is a green revolution that starts in our classrooms and winds up changing lives in living rooms across our borough, leading to healthier children and families.”

“Every dollar spent to improve our schools is a worthwhile investment into the education of our scholars,” said Council Member Cumbo. “I was proud to allocate more than $1 million toward this state-of-the-art greenhouse that I believe will cultivate a deeper appreciation for our environment and urban agriculture amongst the next generation. It is our collective responsibility to ensure that every child has access to a world-class education and an equal opportunity to achieve academic excellence.”

“Our partnership with Teens for Food Justice has opened so many doors for our students to engage in hands-on, powerful, and deep learning about community service and the technologies needed to create sustainable food options. This gift is a game-changer for Unison on so many levels, and we are proud to continue our tradition of offering engaging and enriching curriculum with our new greenhouse. We want to ensure that every student has access to innovative programs and the opportunity to be change agents in the world around them.”

“Teens for Food Justice could not be more thrilled to be expanding its partnership with Unison in this profound way,” said Katherine Soll, CEO and founder of Teens for Food Justice. “The positive impact that the program has already had on student confidence and leadership as well as on student and community behavior shifts around healthy food consumption will be greatly expanded through a farm with a capacity this size. We are extremely grateful to our local leaders for providing us and Unison with this opportunity to develop this key gateway to improved local food equity and community health.”

Additional FY18 funding that BP Adams added to Growing Brooklyn’s Future included $2 million to fund an urban rooftop garden at Brownsville Collaborative Middle School in Brownsville; $1.5 million to expand a green roof project at PS 40 George W. Carver and Gotham Professional Arts Academy in Bedford-Stuyvesant, following previous allocations of $350,000 in FY16 and $450,000 in FY17; $1 million to create an urban farm and greenhouse at PS 312 The Bergen Beach School in Bergen Beach; $500,000 to construct a green roof at PS 146 The Brooklyn New School in Carroll Gardens, which follows a previous allocation of $115,000 to the school in FY17; $200,000 to establish a healthy gardening hub at LIFE Academy High School for Film and Music in Gravesend; $200,000 to support a greenhouse for life sciences, health and wellness at PS 121 Nelson A. Rockefeller in Mapleton, and $167,000 to furnish a hydroponics lab and urban sustainability center at Origins High School in Sheepshead Bay.

In 2016, BP Adams designated an additional $560,000 to support greenhouse studies at four institutions. The schools earning funds for this effort were PS 599 Brooklyn Landmark School in Bedford-Stuyvesant, which obtained $200,000 for a STEM lab and greenhouse; PS 146 The Brooklyn New School in Carroll Gardens, which took in $115,000 for a green roof classroom; Franklin Delano Roosevelt High School in Mapleton, which received $200,000 for their greenhouse project, and IS 278 Marine Park in Marine Park, which got $45,000 to transform a science classroom into a hydroponic farm.

This allocation, it is reported, aims to address the growing public health crisis of preventable disease including rising incidences of diabetes, heart disease, high blood pressure, and high cholesterol in many parts of the borough, particularly in underprivileged central and eastern Brooklyn. These areas have been classified as food deserts due to a dearth of fresh and natural food sources for fruits and vegetables. Cultivating urban farming at schools is part of Borough President Adams’ vision for addressing this scarcity and revolutionizing the borough’s relationship with food and the environment, as well as empowering children and young adults with the ability to grow their own food.

Responding to these multi-million dollar investments in our schools and children, Michael Mulgrew, president of the United Federation of Teachers (UFT). “Our students are learning about the environment — and how to protect and nurture it — with these funds.

“We are growing the next generation of biologists, conservationists, and green urban planners, and I want to thank Borough President Adams for his ongoing support for these projects.”

Following a tour of the school’s existing classroom farm, which utilizes aquaponics and hydroponics, Borough President Adams presented funding recipients with honorary checks with the seal of Brooklyn Borough Hall, as well as an oversized check, made out to “One Brooklyn,” for “Growing Brooklyn’s Future.”

Our recent tours of some of these schools over the past few weeks reveal that BP Adams’ continuing investments in our schools is paying off in many ways.

For one, it has inspired renewed commitment to the community joining the quest to plant strong seeds for the future.

During this April Earth Month, the Magnolia Tree Earth Center programming for children and families, will take the “tree” to the schools with an initiative, supported by DYCD and Councilman Robert Cornegy, to plant Magnolias and provide ecology and environmental information to some 25 schools in Districts 16 and 13, with the emphasis on K-2nd grades.

Betsy DeBacle: The Head of Education Needs One