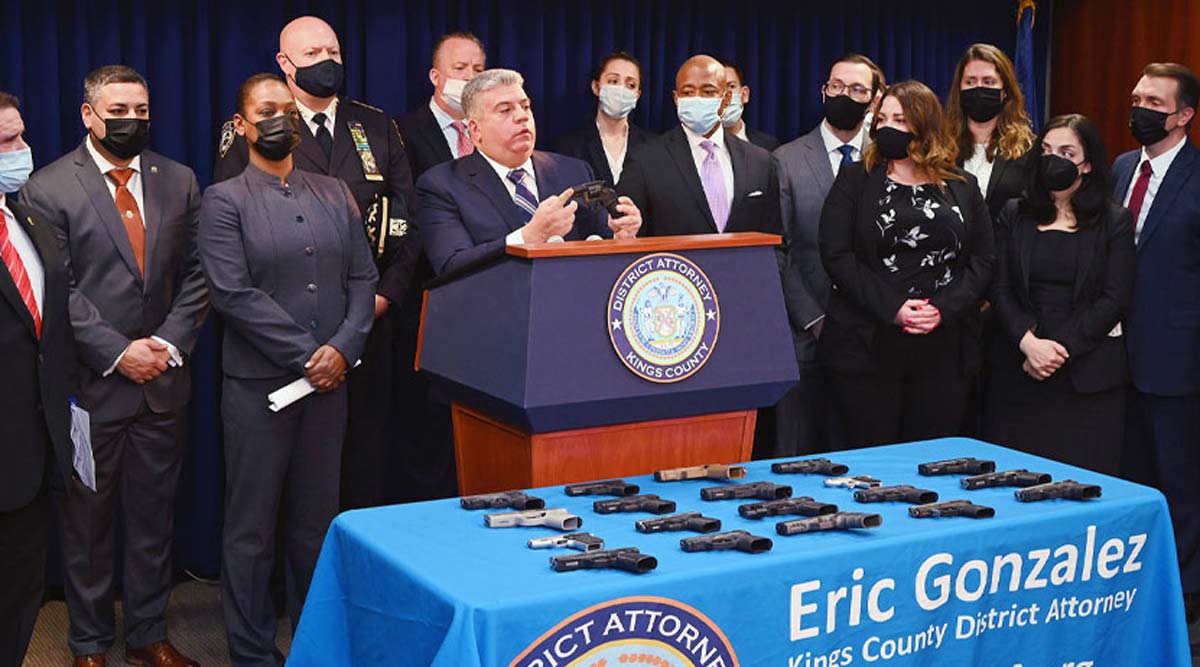 Brooklyn District Attorney Eric Gonzalez announced that Brooklyn made gains in public safety during 2021: homicides and shootings declined compared to 2020. According to a press release, Those categories inched up in other boroughs and citywide. The Brooklyn DA’s Office continues to focus on street gangs and other violent individuals while expanding outreach efforts in and partnerships with impacted communities and violence interrupters. District Attorney remains committed to keeping Brooklyn safe and enhancing community trust in the justice system. A New York Times article shared the “progressive prosecutor’s” strategy: “Listen to the community. Work with the police. Do not speak in absolutes or make promises you cannot keep. Work quietly and steadily, making change case by case.” He’s getting points for going after, as he says, the “drivers of crime” and “ensuring fairness” for all Brooklyn residents.

Last week, Brooklyn District Attorney Eric Gonzalez announced a comprehensive strategy to fight gun violence in Brooklyn. He announced that unprecedented new resources will be dedicated to enhance his Office’s analytics, investigative and technological capacity to prevent violence and to hold accountable those who commit gun crimes.

District Attorney Gonzalez has also hired five experienced prosecutors to focus exclusively on gun crime. These Assistant District Attorneys will ensure that critical gun cases have the staff support needed to not only investigate and prosecute offenses, but to proactively share intelligence to prevent crime.

District Attorney Gonzalez said, “We know what we’re doing in Brooklyn works because shootings here dropped in 2021 as they spiked elsewhere and we’re seeing that progress continue in the first half of 2022. Shootings and murders fell in Brooklyn last year because of a strong focus on the drivers of crime and community engagement, and this initiative will supercharge the most effective strategies. We are committing more prosecutors, more technology, and more information-sharing tools to investigate and prosecute those who commit gun crimes, while broadening the community partnership efforts that are critical to violence prevention. Working with our partners at every level, this initiative will make Brooklyn safer.”

The Crime Strategies Unit operates on the evidence-based principle that a very small number of individuals are responsible for most violent crime, and that by identifying those individuals and carefully targeting investigative and prosecution resources to address those drivers of crime, public safety is improved. It is this focus, shared by our partners in the New York City Police Department, that has helped reduce gun violence in Brooklyn. Last year, shootings declined by 20% and homicides went down by 15%, and the borough has experienced similar percent reductions in these categories so far this year.

The STOP VIOLENCE plan also includes the creation of a new Ghost Gun Unit to focus on weapons sold as kits requiring assembly, which have no serial number, require no background check, and are untraceable.

In addition, the District Attorney has invested in cutting-edge new technology to fight gun crime. With more than $2 million in new software and hardware and four new digital forensics analysts, the District Attorney’s recently certified Digital Evidence Lab is improving the Office’s ability to extract critical evidence and intelligence from cellular phones and other electronics. Specially trained analysts assist with search warrant execution to ensure all potentially relevant digital evidence is captured, analyzed, and utilized for maximum investigative value to prevent crime and to prosecute violent offenders. Leveraging these new resources, in addition to existing tools including ShotSpotter, cellular geolocation, crime mapping, video surveillance, and social media analysis, the Office is bringing unprecedented analytics and investigative tools to the fight against gun violence.

The District Attorney’s Office will continue its collaborative engagement with local, state, and federal partners through the Gun Violence Strategies Partnership (GVSP), a Citywide clearinghouse effort established in August 2021 that brings representatives from every state and federal law enforcement and corrections agency together daily. In these briefings, leaders from each agency discuss the most significant drivers of shooting violence across the City, share information and intelligence, and coordinate resources to ensure that every possible law enforcement tool is brought to bear to interrupt patterns of violent criminal conduct.
The Office also collaborates with the United States Attorney’s Office for the Eastern District of New York regarding “Triggerlock” defendants, which allows federal prosecutors to remove appropriate gun possession cases to U. S. District Court for federal prosecution and sentencing, frequently resulting in more severe sentences. This potential for additional prison time encourages those facing eligible gun charges to cooperate, often revealing information useful to prevent or solve other violent crimes and to identify and stop those trafficking weapons.

Finally, the District Attorney is committed to continuing the Office’s strong community engagement efforts to build trust, strengthen partnerships, and promote collaboration. These efforts include gun buybacks event in collaboration with the NYPD and local churches; new youth engagement programming and support for violence interrupters who work directly with at-risk individuals to help resolve conflicts peacefully; as well as other community-driven efforts to match services and resources to those in need to prevent criminal conduct. The District Attorney’s Office has also partnered with neighborhood organizations in Bedford-Stuyvesant, investing unprecedented resources as part of Project Restore, an innovative pilot program that seeks to address a decades-long history of violent gang rivalry through restorative justice interventions. This effort to prevent violent conflict, combined with direct engagement in impacted communities following significant enforcement events helps to not only reduce violence, but also to promote healing and growth.

Fight Back from Annoying Phone Robocalls and Spammers