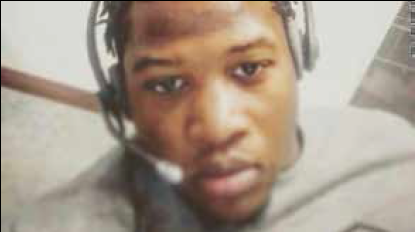 Not only was he clearly identifiable, but officers on the scene knew Jemel Roberson.

A civil rights lawsuit has been filed against “Officer John Doe” and Midloathian Village.

Jemel Roberson, age 26, shot and killed on Sunday by a white cop in a Chicago suburb, was wearing a hat that said “SECURITY” on it, clearly identifying himself as an ally to the police.

Officers circled his body in video footage, after telling the unnamed officer, who is a four-year veteran of the force, that Roberson was “one of us.”

A Midlothian officer used excessive force when he killed an on-duty armed guard while responding to a shots fired call at a bar in Robbins, IL, a lawsuit was filed against the cop and village. “Other officers knew him and screamed out he’s one of us,” says witness.

Beatrice Roberson, Jemel’s mother, retained attorney Gregory Kulis who filed a civil rights lawsuit against “Officer John Doe” and the Village of Midloathian on Monday claiming the officer’s actions were “intentional, willful and wanton” and that the shooting was “unprovoked,” “unjustified” and “unreasonable.”

“Jemel was trying to save people’s lives,” said Kulis. “He was working security. A shooting had just taken place inside the establishment. So he was doing his job and holding onto somebody until somebody arrived. And a police officer, it’s our feeling didn’t make the proper assessment and fired and killed Jemel.”

Midloathian police expressed “heartfelt condolences” in a statement to the family.

Sherriff’s office spokeswoman Sophia Ansari said the man shot by police, “turned out to be a guy working security for the bar.”

Roberson was the father of a nine-month-old son with Avontea Boose, and was planning on getting an apartment for his family with his earnings from the job, according to Rev. Marvin Hunter, who also said Roberson was a promising keyboard player at several churches including his, and “an upstanding man.”

Hunter is the great uncle of Laquan McDonald who was also killed by police in Chicago in 2014.

A vigil held outside Manny’s on Monday was wrought with expressions of frustration, grief, and demands for action:

“Why? Why did you kill him?” Roberson’s cousin, Candace Ousley asked. “It doesn’t make sense. The police officer just saw a black man. I believe if he was indeed white, he’d be alive.”

Another man at the vigil said, “This was not reckless policing, this was homicidal policing. They saw a black man with a gun. If he did not have a gun, his black skin made him a weapon.

“As a community, we demand respectful engagement. We want the police to treat our people with just a certain amount of dignity and respect. They patrol the Black community like some . . . Gestapo being judge, jury and executioner.”

Another vigil attendee, Harvey Alderman Keith Price, called on State’s Attorney Kim Foxx to open an investigation into the shooting.

Lane Tech College Prep, where Roberson graduated from, tweeted a remembrance of Roberson:

“It is with great sadness that we inform you of the tragic passing of 2010 Lane Tech graduate and Lane Tech Basketball alumn, Jemel Roberson. We pass along our deepest condolences to the friends and family of Jemel. Jemel had a big smile and a bigger heart. You will be missed.”

Prisoners Are Getting Paid $1.45 a Day to Fight the California Wildfires