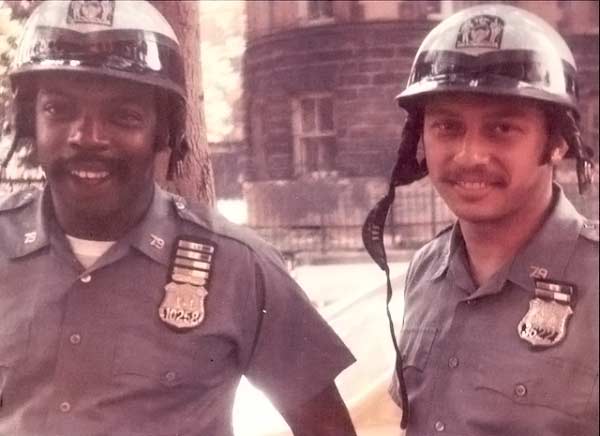 In the Spring of 1969, as a rookie police officer not long after graduating from the NYC Police Academy, I was assigned to the 79 Precinct where I came to meet Joe Willins, a tall well-built Black man who carried himself with an element of confidence.

We seemed to be working the same shifts, as I kept running into him. He stood out, mostly dressed in street clothes rather than a uniform, and carried what appeared to be a diary under his arm. My curiosity got the best of me and I asked one of the police officers who that was. He said, ‘Oh that’s Scooter Joe.’ I thought, ‘What an odd name. After spending some time working with different Officers I asked, ‘What does he do?’

Piecing together from the various conversations with cops in the precinct, I learned the reason he was in civilian clothes was that he had many court cases for the drug arrests he was making and the book was a list of the dates he had to be in court. Growing up in a white middleclass neighborhood in the 1950’s and landing in the 79 Precinct, I wasn’t quite sure what planet I was on or did I somehow make a mistake coming here?  Being autonomous and growing up around my dad’s business as a general contractor, I was trying to figure out how I was going to fit in and work in the 79 Precinct. During the early moments spent at the 79, I couldn’t seem to find the right person or the right job that felt satisfying. All I could see was people and cops come and go.

I decided to inquire if there was a position or opening in the Scooter Squad.  Well after completing scooter training, I was asked what scooter squad I would like to be assigned to, I said put me in the same squad as Scooter Joe.I needed to learn who I was and what it was that a cop was supposed to do. Joe seemed to be the most active cop in the precinct and perhaps I could learn something from him.  Each scooter cop was supposed to patrol a specific area in the 79, however that wasn’t very appealing to me as I had no one to talk to or learn from. So, I decided to follow along with Joe in his designated area of patrol. Of course, that made him very suspicious of who I was, as Joe had become the number one cop in making drug arrests in the 79 Precinct. As time went by, we became comfortable with each other and together we started to make drug arrests. I asked him why he did all of this when no one else in the precinct was doing anything like he was? A Black man arresting other Black men and putting them in jail? He said he grew up here and I could not allow the community to be taken over by drugs and a crime rate that was out of control.

I had never seen drugs and crime at this level in my entire life, but I could relate to what he was doing. I convinced myself I could help and together we could make a difference. For me that was a turning point in my life, as I now had a purpose and someone who could teach me what I didn’t know. We went on together to make hundreds of drug arrests. The timing of this relationship couldn’t have come at a worse time, as the Knapp Commission had just finished its investigation of police corruption — police being paid off to overlook drug laws.’

I came to trust Joe, as he had incredible instincts about controlling crime and where to find it.  I brought a different perspective and insight as to what we were doing and when we blended those skills. The street crime, the drug dealers  and all those who made a living off the street started to take notice. We became very effective in changing the conditions in the 79 Precinct.

The street criminals whose businesses we were interrupting started to make civilian complaints about Joe and myself in order to slow us down or put us out of business, hoping the police dept. would investigate these unfounded, fabricated complaints.  I said to Joe, ’One day why don’t we arrest the same people and charge them with the major crimes they were also committing, and stop making drug arrests?’ At least they wouldn’t be coming back to the street faster than we were.

Over a period of 18 months we were involved in18 major homicide investigations where we were able to assist the detectives in arresting 36 people to stand trial for murder. Over our 20-year careers, or 40 years collectively, never was one person — criminal or otherwise — ever injured, shot or placed in a hospital. We developed skills and techniques where we could obtain vital information by establishing a rapport with the people we came into contact with. It was totally unnecessary to use force on anyone, as we built a level of trust between ourselves, the criminal element and the community.

There was an awesome level of respect as people came to realize they had nothing to fear, as dialogue between us was paramount and any issue could be resolved without fear or force. There were times where I actually believed we didn’t need guns to do our job. In closing, not one shot was ever fired nor was any one person ever injured. Police work is an art and has to be perfected. Joe and I remained friends until his death this year. Our friendship lasted more than 50 years. He was the greatest cop I have ever met or had the pleasure to know. Our families were one, we never saw color, we only wanted to make Bedford/Stuyvesant a better place to live. I will miss him every day.