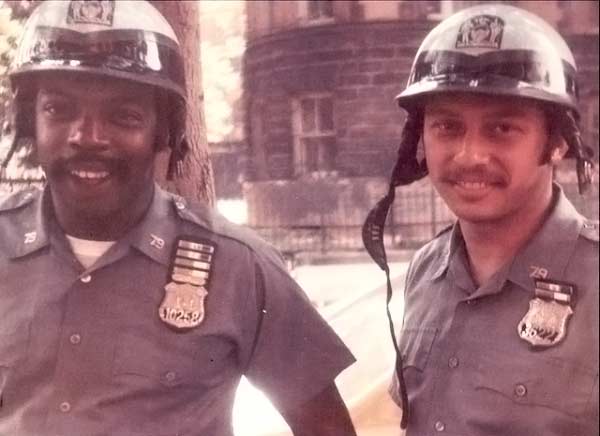 Peace-and-Justice during the age of aggressive policing

More than forty years ago, two Bedford Stuyvesant cops – one Black, the other white – exemplified the policing the public seeks today. Joseph Willins and Kenneth Kaufman, known as The Scooter Cops of Bedford-Stuyvesant, teamed up to fight crime on the streets without putting up a “fight” or, reportedly, firing a gun. Kenny still resides in Brooklyn. Scooter Joe passed earlier this spring. Writer Eulene Inniss remembers Scooter Joe, a neighborhood legend.

“Two street savvy Cops Nail ‘Em with Words” was the glaring headline of a New York Daily News article written in the late 70s. No Bullets, No Choking, No Abuse. The story was about the crime-fighting methods used to apprehend lawbreakers by the late, retired NYPD officer Joseph Willins (“Scooter Joe”) and his partner Kenneth Kaufman in Bedford-Stuyvesant. It was a time when drugs were rampant and crime was high. But the crime-fighting scooter team of two found that working with the community was a better form of law enforcement than the use of deadly force.

Officer Willins joined the ancestors on April 9, 2020, but he left something behind—audio- and video-taped accounts of his experiences as an officer. The interviews also cover his views on current police conditions, behavior, and professionalism.
Willins was known throughout the Bedford Stuyvesant community as “Scooter Joe” because of his years of riding his scooter throughout the neighborhood while providing community service to residents in the 79th precinct. He was passionate about his work.

Mr. Willins’ police work has been documented in a book by Dave Fisher, The Incredible Scooter Cops, published by Fawcett. It was drafted into a stage play. A documentary called, “Scooter Cops of Bed-Stuy” — about the careers of officers Joe and Kenny as they solved crimes in the 79th — was in production at the time of Joe’s passing. The producers said the cops were assigned to write parking tickets and check potholes, but wound up solving murders.
During his career, Scooter Joe said he “never fired weapons to apprehend anyone, and … we did not have the technology that’s available today. Our jobs were not 9-5. I did lots of leg work, after hours, so when I arrested someone, I knew it was correct.”
Evidence came from eyewitnesses, associates, family, or the victim. “I put the puzzle together with skills, so the pieces fit. My partner, officer Kaufman, and I would (have seen) Eric Garner (as a leader), the eyes and ears of the community. He knew what was going on, we would have befriended him.”

Scooter Joe was born and raised in Bedford Stuyvesant. He believed that he had a moral obligation to rid the community of crime for all the good, law-abiding residents, so he went after the criminal element and made over 2,000 arrests and put over 38 people in jail for murder. “I partnered with the community to make it safe for the residents. I provided Police service not Police tokenism. Neither did I over-police the community,” Scooter reflected.

Older community residents still talk about Scooter Joe’s caring and humanity, their ability to reach out to him in times of need, or just to embrace, or talk to, their disobedient children. The community exhibited an undying love and respect. He had been the guest of television and radio talk shows, featured in print, and has a storehouse of articles, award letters and citations.
Scooter Joe and Kenny’s policing tactics and wisdom perhaps could be incorporated into the training strategies of younger officers coming onto the force.
So, as we celebrate June, Father’s Day month, against the backdrop of hellish headlines, let us remember this ex-Marine, son, brother, and uncle who epitomized the NYPD slogan: “Courtesy, Professionalism, and Respect.” Scooter Joe Wilson was a man whose essential values centered on saving lives.
When Mr. Willis retired from the NYPD more than thirty block associations, elected officials, clergy, police supervisors of all ranks, representing thousands of community residents, honored his many years of service to Bedford-Stuyvesant with an elaborate Retirement Party for him.
Editor’s Note: Mr. Willins is the father of two children, Kenya and Joseph. His partner Ken is the father of three boys: Ross of whom Scooter Joe is godfather, and Ricky and Barry.
Kauffman’s memories of working with his partner, Scooter Joe, will be shared this month in Our Time Press. For more information, visit: www.scootercops.com.