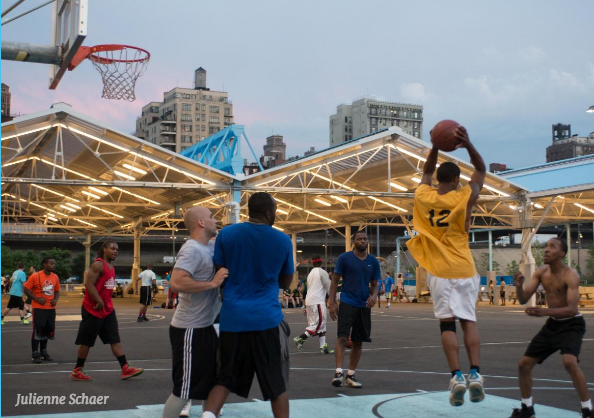 It’s never too early to talk about some hoops, especially when some of the best high school players in the country took their talents to the Brooklyn Bridge Park last week in the 2016 Under Armour Elite 24 game. Although there was a lot of raw talents from across the country, there were some standout New York City ballers as well. One of the standouts was St. Raymond’s guard Isaiah Washington, who was named one of the game’s Most Valuable Players with a 36-point performance. Washington was a late addition to the Elite 24 roster and was only 3 points shy of breaking former Lincoln High School star and current NBA player Lance Stephenson’s single-game scoring record. When the game was over, it was hard not to talk about Isaiah Washington.

Eager to display his skills and prove many people wrong, Washington had this to say after the game, “Nobody’s ever going to count me out again. There was a bit of a chip on my shoulder, I just wanted to prove to everybody that they were wrong for not putting me in the game in the first place”.

Early and often, Washington went up against Trevon Duval, who is ranked the number one point guard in the Class of 2017. He made his presence known and in front of a lively crowd at Pier 2, both players channeled their inner competitive levels. With several Division 1 college scouts and professional scouts in attendance, there were other players who stepped up as well. Players such as former St. Raymond’s star Sidney Wilson, Archbishop Molloy center Moses Brown and Brooklyn resident Nick Richards all put their marks during the game. It was a very exciting game, a game where team Drive squeezed out a 140-143 victory over team Clutch. Now that the game is over and done with, these young stars will continue to keep the drive in them and hopefully have a clutch-like future in hopes of getting better and being recognized by a top-level college program. Best of luck to the local basketball players as well as every player involved in what was a very exciting game.

Sports Notes: (Little League Baseball) Congratulations to the young kids of Endwell, New York who won the 2016 Little League World Series with a 2-1 victory over South Korea. They became the first U.S. team since 2011 to win the World Series. (Baseball) Both the Mets and Yankees are still in the hunt in their respective leagues as both teams look to make one final push towards capturing a wild card in hopes of making the playoffs. (Football) There is only a little over 2 weeks left till football returns. How do the Jets and Giants look to you so far? Our Time Press universe, E-mail me at Castroeddie714@gmail.com and share your thoughts!