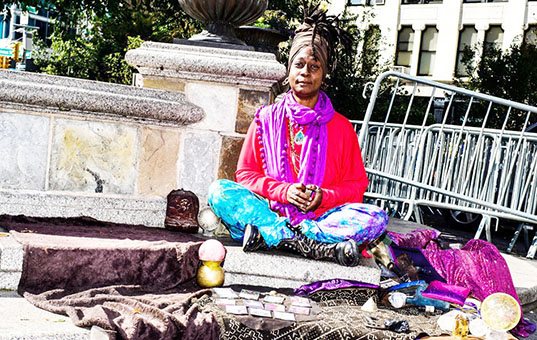 I wanted to list some 2017 predictions as is customary by many publications for their New Year’s issues. I recently learned about an extraordinary psychic/clairvoyant, Uversa Oumbajuah, who predicted in August that a Donald Trump would win the Presidential Election, and she foresaw subsequent events unfold in his administration. Ms. Oumbajuah holds forth in Union Square Park during the warmer months. Now I have to stalk her online to get a list of 2017 predictions. Ms. Oumbajuah says that she was conceived in Mobay, Jamaica and born in New York 51 years ago. The college-educated seer is writing a book and would love to be a guest on THE VIEW. Her Trump prediction has been published by hopes&fears.com, newsmax.com and thetab.com.

Kwanzaa is that weeklong Pan-African holiday/celebration which was born on 12/26/66 in the midst of the Black Power period. Its seven founding principles are Umoja(unity), Kujichagulia(self-determination), Ujima(collective work and responsibility), Ujamaa(cooperative economics), Nia(purpose), Kuumba(creativity) and Imani(faith). This week begins Kwanzaa’s 50th Birthday. Here are some remarks by Dr. Maulana (Ron) Karenga, Kwanzaa founder/creator.

“The 50th Anniversary of the Pan-African holiday Kwanzaa brings added focus and emphasis on its customary call for remembrance, reflection and recommitment. He continues: “It is a celebration of family, community and culture. But it is also a celebration of freedom, an act of freedom and an instrument of freedom. It was conceived as an instrument of struggle to raise the consciousness of the people to unite them around principles that anchored and elevated them in the struggle to be themselves and free themselves and build the just and good world we all want, work for and deserve.” HAPPY KWANZAA!!!!!!

The Democrats are in complete disarray in just two months before they elect new leadership and insurmountable challenges like winning more seats in local, state and congressional races. Congressman Keith Ellison is running for DNC Chair, as is Labor Secretary Tom Perez. About 450 voting members of the Democratic National Committee will elect a chair, five vice chairs, a treasurer, a secretary and a national finance chair. Michael Black, rookie NYS Assemblyman from the Bronx, 34, is interested in a vice chair. However, the Bronx political machine does not support his bid.

The Equality Coalition is organizing “The Candidates Forum” for the 9th Council District, recently represented by Inez Dickens, which will be held on January 11th at 215 West 125th Street, 3rd Floor at 6 pm in Harlem. Announced candidates who were invited to the forum include Charles Cooper, Mamadou Drame, Donald Fields, Shannette Gray, Marvin Holland, Troy Outlaw and NYS Senator Bill Perkins. [Contact cnelly@nyccoalition.org] During the round of holiday parties, there were murmurs about Athena Moore of Boro Prexy Brewer’s office and her interest in the 9th District election. Calls to her office were not answered. Hope to see all of those people who have been communicating with me about their candidacy and speaking at the forum. Hey Larry Scott Blackmon, Cordell Cleare, Michael Adams, Yvonne Stafford, Charles Cooper, I am talking about you!

Idris Elba, British actor/musician and confirmed workaholic, has a busy film calendar. He has already completed three films–“100 Streets”, “The Dark Tower” and “Thor: Ragnarok– which are scheduled for 2017 release. Next year, he cuts his teeth as a feature film director with “YARDIE”, a story about a Jamaican drug lord in London in the 1980s.

Brooklyn Boro President Eric Adams’ office partners with the Alliance for Coney Island for a one-of-a-kind New Year’s Eve Party on Coney Island’s historic Riegelmann Boardwalk where free rides and ice skating will be available. The fun begins at 6 pm and continues through midnight along Steeplechase Plaza. Adams also teams with the Prospect Park Alliance on New Year’s Eve at the Grand Army Plaza in Prospect Heights at 11 pm. [Visit Brooklyn-usa.org]

The Apollo Theater and WNYC will co-present the 11th Annual Martin Luther King, Jr. Day Celebration “WHERE DO WE GO FROM HERE? and the Future of Inclusion” on Sunday, January 15th from 3-5 pm. WNYC host Brian Lehrer and Jami Floyd will co-moderate a discussion on the future of social justice movements in the wake of one of the most divisive general elections in recent history and the inauguration of President-elect Donald Trump. Guest panelists include NY Daily News journalist Shaun King, Black Lives Matter co-Founder Opal Tometi, President of the Brooklyn NAACP L. Joy Williams and Sr. Minister Emeritus at Riverside Church Rev. James Forbes. Event is free and open to the public.

A Harlem-based writer, Victoria Horsford can be reached at Victoria.horsford@gmail.com.