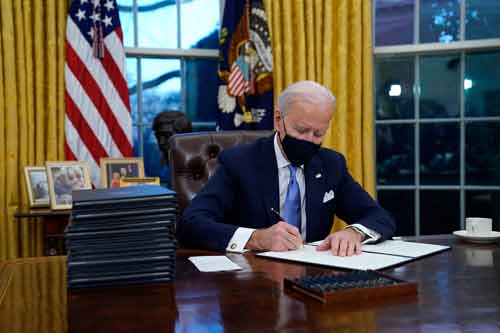 By Bo Erickson, cbsnews.com
For almost two years, Joe Biden has been telling Americans what he plans to do on his first day in office — and the next 99 — if elected to be the nation’s 46th president.
In speeches, interviews, and in at least 49 published plans throughout his presidential campaign, Mr. Biden talked about the actions he›d take in the earliest days of his administration — what he would do if he triumphed in what he saw as a «battle for the soul of the nation» against President Trump.
Incoming White House chief of staff Ron Klain distributed a memo Saturday that reiterated Mr. Biden’s intention to fulfill several of his promises — some geared toward immediate action to arrest the surging coronavirus pandemic, some to roll back the actions taken by President Trump in the last four years, and others to address problems that have persisted over several administrations.
The initiatives include around a dozen of executive actions he can enact alone as president on the first day in office, January 20. Here are a few of the highlights:

Overturning Trump actions
Rejoin the Paris climate agreement;
End so-called “Muslim ban” on travel, which in 2017 restricted travel and immigration to the U.S. from Syria, Iran, Iraq, Sudan, Libya, Somalia and Yemen, before adding Eritrea, Nigeria, Myanmar, Kyrgyzstan, and Tanzania in 2020.
Klain said the president-elect would continue to roll out other executive actions throughout the first two weeks of the new administration.
In his 562-day presidential campaign, Mr. Biden made other “day-one” promises, too — here’s the list:

First 100 days
Mr. Biden will be relying on Congress to approve many of the initiatives he aims to accomplish for his first 100 days, which could potentially be difficult, even with the slight majority that will be held by Democrats. Here are some of those promises:
Economic recovery: Initiate “Build Back Better” economic recovery plan in February, during a joint session of Congress. Released during the general election, the plan called for spending trillions on American-made products, health services and infrastructure updates.
Climate: Organize a «climate world summit» to push world leaders to more aggressively tackle climate change, specifically addressing global shipping and aviation emissions. This is one of the priorities Mr. Biden has established that does not require congressional approval. The new president also promised to “pressure” China to stop subsidizing coal and “outsourcing” pollution.
Repealing tax cuts: In order to pay for many of these wish list items, Mr. Biden said he would fight for the repeal of the 2017 tax cuts, which would require action by Congress. He argued that the tax cuts favored wealthy Americans.
Guns: After the FBI studies “loopholes” in the gun background check system, Mr. Biden said he would ask Congress to close the «loopholes» and also repeal liability protection for gun manufacturers, which would allow Americans to sue the gun industry if a gun is used in a crime. Biden also said he wants to «restructure» federal agencies that oversee gun laws.
Violence: As a senator, Mr. Biden authored the Violence Against Women Act in 1994 to offer more protections for women. This legislation needs to be signed into law again. Biden said one key effort in the update would include greater protections for transgender women.
Equality: Push to pass the “Equality Act,” a bill to add more protections for LGBT Americans.