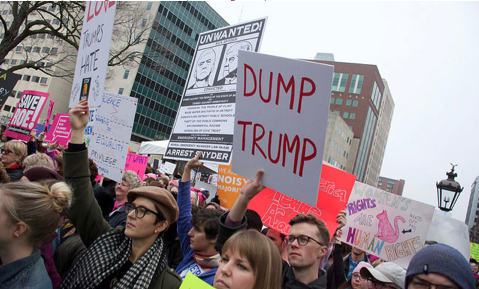 Even as Donald Trump took the oath of office on Jan. 20 and the national conversation turned to foreboding interpretations of his inaugural address, a very different story was unfolding. Two public interest nonprofits launched a campaign to begin an impeachment investigation into the new president.

At issue are Trump’s businesses, both at home and abroad, which may result in payments from foreign governments or from the US or state governments. That’s something many legal scholars believe is explicitly forbidden by a clause in the US Constitution that reads:

No Title of Nobility shall be granted by the United States: And no Person holding any Office of Profit or Trust under them, shall, without the Consent of the Congress, accept of any present, Emolument, Office, or Title, of any kind whatever, from any King, Prince, or foreign State.

The two groups, Free Speech for People and RootsAction, have a website (impeachdonaldtrumpnow.org) with model legislation they want to see introduced in Congress, as well as a petition and a host of other ways to take action. I spoke with John Bonifaz, co-founder and president of Free Speech for People, to learn more about the campaign. Bonifaz is an attorney and political activist specializing in constitutional law and voting rights. He’s based in Amherst, Massachusetts.

Voices From the Women’s March on Washington