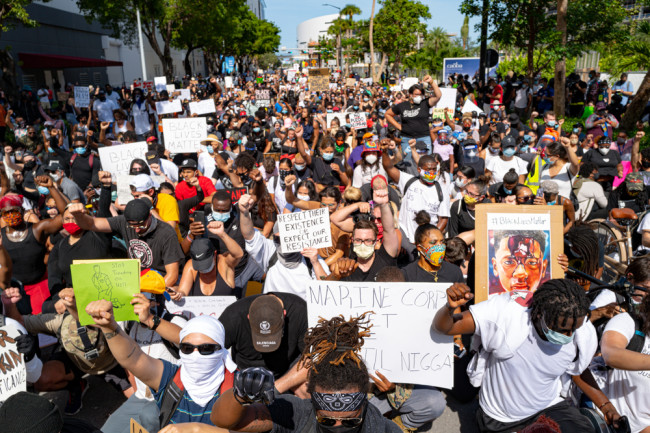 I spent about 2 hours watching fox & Friends this morning and it is obvious why it’s Trump’s favorite show. The coronavirus pandemic not only did not lead the news, it was mentioned only with one emergency room doctor in a Houston interview. Not mentioned were any statistics on the spiking of deaths in Texas, Florida or Arizona, or the extent of the spread.
What did lead was Black on Black gun violence. And the greatest concern for them, as it should have been, was the horrible shooting death of one-year-old Davell Gardner Jr, at Madison Street and Marcus Garvey Blvd. in Bedford Stuyvesant on Monday. But there was the between-the-lines suggestion of a natural depravity as the root cause of the violence. They coupled that story with a loop of a surveillance video of gun violence and stories about police being attacked.

Big emphasis was placed on how the Defund the Police initiatives would lead to more deaths and criminals running unleashed on the street. It is no wonder that gun sales have almost doubled between April and June according to a report in the Wall Street Journal on Tuesday.
If all you watched was Fox News, it’s easy to understand people thinking the pandemic was not all that bad and the real danger is of armed Blacks and White protestors coming to wreak havoc and death on a town near you.

This is speaking directly to Donald Trump’s base, keeping them frightened and keeping them in line by confirming their worst thoughts and fears.
2 hours was as much as I could take before returning to MSNBC and CNN coverage of Davell and where the extent of the pandemic is in your face and the mantra is to wear masks, stay 6-feet apart and how, if and when are we going to be able to safely send our children back to school.

We are already rightfully fearful about the school environment, and that’s before the second wave hits along with the sniffles and parents not knowing if their child brought home the flu or Covid 19. Wondering if their children can be near the grandparents or even the parents themselves.

It did not have to be this way. In a sane society, Republican governors in Georgia, Texas and Arizona would be looking at how New York handled the worst of it, bite the bullet and take charge. Do a hard 3-week shutdown, gather an army of contact tracers, and open slowly. However, at this point, this is much easier said than done. It would be possible if the federal government sent everyone a check a week for the shutdown and through the Phase One re-openings. If they paid for the tracers and put enough money into the schools to pay for what needs to be done. Unfortunately, we are being led into the abyss by a sociopath of a president who has no caring for humans other than himself and maybe Ivanka.

Trump is his name and he told them to open the economy, they did, and now the citizens of their states are paying the price in sickness and deaths. He is now telling them to open the schools, saying in effect, to ignore what happened when they opened the bars and restaurants and to pay no attention to science. As hard as it is to believe, He does not care about the lives of children, teachers, school staff or parents.

In his delusion the virus will “suddenly disappear,” and people should ignore the deaths, over 136,000 at this moment, and get back to work so that he can say it’s all over folks, vote for me.
But Covid19 is a fact of biology and it doesn’t care about his delusion, it just takes every opportunity to spread. And to anthropomorphize it, if Covid 19 had any emotion at all, it would be giddiness and joy at the thought of people not wearing masks and getting together in groups to have a good time.

Donald Trump is Covd19’s best enabler ever, and together they have already killed tens of thousands of Americans and thousands more will die in the coming months. The experts tell us there is an even more terrible viral storm coming in the fall.
Right around the presidential election when Trump will lie, cheat, and use any foreign help he can get to stay in power. We are in for a very rough time to come.

Race Men: Faithful to their Purpose and Mission

There is so much going on, it is difficult not to feel overloaded.