The Good in it All
Advertisement 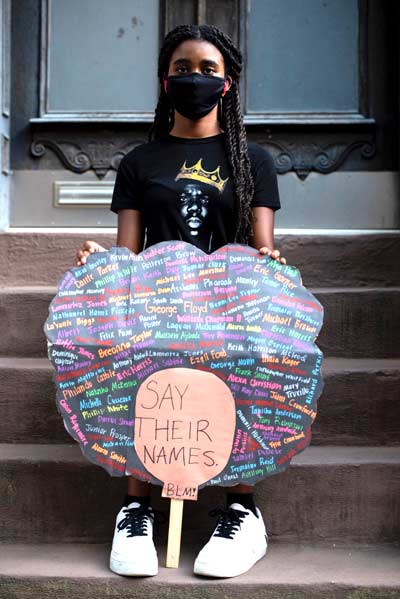 After three months of being quarantined into a bubble that consisted of the people you live with and a few close friends or family, the dozens of protests in our city haven’t just been an opportunity to express our collective outrage. They have been an opportunity to just once again be part of a collective. Social interaction is a part of natural human development. Science will tell you that social interaction lowers stress and anxiety, and even increases our endocrine immune systems, but you don’t need to be a scientist to know that children crave the ability to interact amongst other children. It’s a necessary part of a child’s upbringing, their adventures with other children.

I went to two protests this past week. The first one was on Sunday, a well-kempt unit of Bed Stuy residents marching from the park on Stuyvesant and Fulton over to Restoration. The second was a much larger representation that began in Fort Greene Park, traveled to Borough Hall for a set of speeches and then walked over the Brooklyn Bridge and onto City Hall. In both cases the youth were prominent in the crowd; the second protest was actually a youth protest. The children of our borough displayed enormous creativity in their design of their protest posters and signs. They displayed that sparkling youthful energy in maintaining loud chants and a swift pace as they walked for miles under the early-summer sun. They displayed a working knowledge of the issues — police brutality, systemic racism, oppression in all forms. They are aware of who George Floyd was, and Breyonna Taylor, and Ahmad Aubrey and Eric Garner, and Emmit Till. White and Black alike, these kids know the stories and they understand the perspective enough to form a rational opinion.

I was 14 years old when Keith Mondello and his friend Joseph Fama murdered Yusef Hawkins in Bensonhurst. I remember being hurt, confused and angry. Yusef was around my age. At the time, I had an uncle that lived in Bay Ridge, right on 92nd street and 4th avenue. I had gone out there from time to time to spend the weekend with him and my cousin. I knew the white kids out there were racist. I knew that I could’ve been in the same situation as Yusef. That scared me — not the death part, because growing up in Bed Stuy meant that you were confronted with death early on, but the part that said that I could be killed just because I’m Black. You could avoid the drug game, and the gangs, and the bad kids. But, you couldn’t avoid being Black, right?

There were protests all over Brooklyn after Yusef’s death. I remember that at one of the protests in Bensonhurst, they were saying that white men were throwing bottles at the Black protestors. I remember hearing that as confirmation that there was a real problem of race right here in Brooklyn. This was 1989, the summer of Do the Right Thing, the summer of “Fight the Power.” Our music and our movies were teaching us to rebel. And so, when protests and rallies were organized in the name of Yusef Hawkins, my friends and I were there.
Huey Newton said that the revolution has always been in the hands of the young. For as far back as you want to go in the civic history of Blacks in America, it has always been the youth that pushed the issues forward, into the streets. Also, it is the experience in protests that turns rebellious teenagers into civic leaders. So, when I see the children angry about our government, and upset at the wanton killing of Blacks at the hands of racist whites, and they are outraged enough to make their own signs and to ask permission of their parents to go to a protest, that excites the optimist in me. Because the one thing we are sorely lacking in this country is leadership, and to know that the youth realize this as well, means that a definite change is on the horizon.

Summer school will be online. Summer Youth Employment has been cut from the budget. Our children have a precarious summer ahead of them. Let them protest. Let them make signs and walk over bridges and scream chants on the steps of buildings that represent the disconnect between government and citizen. Let them protest. We will all be better for it.

So. Who’s doing all of the fireworks?

Where Are We Going?