Sonia Sanchez: The Literary Power
of Herstory and History
Advertisement 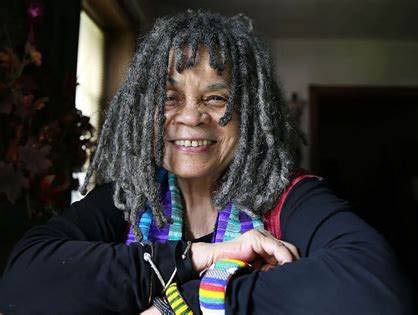 By Fern Gillespie
On September 9, Sonia Sanchez marked her 88th birthday. It’s a cause for celebration. Sanchez embodies the literary power of Herstory and History. The legendary poet, author, scholar, playwright and much more is not only a leader in the Black Arts Movement, but she’s also an intellectual and creative force who has been instrumental in changing American cultural history. Over the last six decades, the Hunter College and NYU grad, has mentored thousands of students, and penned dozens of books of poetry, short stories, critical essays, plays, and children’s literature. Her classics include We a Baddddd People and Homegirls and Handgrenades. In recent years, she’s been honored with the prestigious Robert Frost Medal, Dorothy and Lillian Gish Prize and the Edward MacDowell Medal. She created and taught the first course focused on Black women and literature. On October 20, she serves as the chair of the Center for Black Literature at Medgar Evers College’s 20th Anniversary Jubilee: A Cultural and Literary Arts Experience. “Sister Brenda Greene (center director) shows the students Black literary people who are writing these works,” explained Sanchez. “She tells the students that the writers onstage are geniuses. Listen to what they say. Take notes. Study them. If you really want to write, read their books.” Our Time Press recently spoke with Sonia Sanchez about her impact on herstory and history.

OTP: In 1968 at San Francisco State, you started what’s considered the first Black Studies curriculum at a predominately white college. Why was that pivotal for you?
SS: I went out to San Francisco State to help begin the first Black Studies program in America. It was an amazing program. I was teaching writing and African American lit. I remember going into my African American lit class and people were sitting all the way out in the hallway waiting. They had blackboards that went around the room. And people we’re sitting on the little cabinets. It was an amazing moment. I was just thrown by it. I had them go to an empty classroom and pull some of the chairs out. I wrote all these names on the blackboard. The students only recognized Martin Luther King and Malcolm X. I said that’s alright because by the end of the semester you will not only recognize these people, but you’ll realize just how we got a Malcolm and a Martin in a place called America.

OTP: What were some of the names that you wrote on the blackboard that they were not aware of?
SS: Every possible name in the literature that we know. There were names like W.E.B. Du Bois, Frederick Douglass, Harriet Tubman and names of people from the Harlem Renaissance. There were also people who were involved in the movement that had begun in the South. Most of them were literary. They had not heard of any of these people that you were announcing and telling them about. It was almost magical. It was like you understood the calling, you understood why you were there. I had vowed that we would never have a class of students coming out of high school going into college that they would ever leave the classroom without knowing how they got there and not knowing the names of people who had come before. Nor graduate a class that didn’t know our herstory and history. People were on the edge of their seats. They had tears in their eyes and they were saying
“How could I not heard of that?” We will never be that way again. We will never let that happen again. You will know you’re herstory and history.

OTP: Was that first Black Studies class mostly Black students or an integrated class?
SS: It was mostly all Black students and some Latino students. In the next semester, they were Asian students in there too. We were teaching and doing research about California. Someone had found old posters plastered in San Francisco for the Japanese to report at a certain time to be sent to these camps. I held it up to the class. I had two Japanese American students in my class. I read it. I asked them if they knew about the concentration camps. They got pissed at me. They said Professor Sanchez, we never heard any such thing like that. That’s the problem sometimes when you’re treading on new ground that you can involve people with things that they never have been involved with. They said their parents had never told them anything about that. When they got ready to leave the classroom, I handed them copies and said ask your parents if they knew anything about it. They came back to school the following week in tears. Their parents had told them over the weekend that they had been put in concentration camps because Americans had thought they were un-American. That’s what I mean about the teaching. Years later, I was in Seattle speaking before a couple of thousand people. I saw somebody dashing down the steps and they ran up on the stage. It was one of the students from that class. She hugged me. She told the audience that I was her professor and I was the first person that told her and her friend that our parents had probably been in concentration camps. And she turned to me and said she did a film on it. She was so proud. And we kept hugging each other. That’s what I’m talking about. We taught to Blacks, Asians, Hispanics and some whites who wanted to come in and learn. They knew that there was something wrong. They wanted to hear what was being said and it was an honor to teach there.

OTP: What are your reflections on Malcolm X and his significance to you and the Black Arts Movement?
SS: Malcolm X and Coltrane were the important catalyst for the origins of the Black Arts Movement. What’s so sad about it was they died before what they were talking about came to fruition. Coltrane’s music influenced us all. He was dismantling the foundation of western music. And showed that you could do something beautiful outside the constraints of this western music. Malcolm‘s words made people remember Coltrane’s music. Malcolm said ‘Do you want to integrate into a burning house? Do you want human rights or civil rights?” These two people were leading us to be moved. Malcolm performed the magic that turned Negroes into Black people. The other things that happened to what was going on in terms of the blues, R&B, and gospel and Motown. And, all of the literature that we were writing at that particular time. Another thing that the Black Arts Movement did was that we went back and brought forward people like Ozzie Davis, Gwendolyn Brooks, Margaret Walker, Ruby Dee and all of these people that were doing something important. We went back into past herstory and history and brought people out that needed to be heard–like Langston Hughes, Sterling Brown, Zora Neale Hurston, Jacob Lawrence, John O. Killens, Jean Toomer, Countee Cullen, and Claude McKay. All of these people needed to be brought forward. We taught their words at the university for the first time. We got people to go to the library. We got copies of their books for the library. We went back to the Harlem Renaissance. I told them you have a herstory and history that they haven’t taught you. We want to show you how important these people are and have been.

OTP: Poets like Elizabeth Alexander, jessica Care moore, and Amanda Gorman are making a major cultural impact. Do you think their work intersects the Black Arts Movement and Black Power Movement to Hip Hop and Black Lives Matter movements?
SS: I think that at some point, in order for you to truly understand what’s going on, you have to do what we did. We had to go back and look at their herstory and history. So, these poets are very good. Many of them have looked back at some of the poets. They have read them, have studied them in universities and have read them on their own. I was invited down to Washington, DC to do a reading. Our dear sister Amanda Gorman was the young poet laureate there. She introduced me. She also read a couple of her poems there. I was so pleased when she got that position. I was so pleased with what she was writing and how she was writing. People have got to understand that all of this is truly about the herstory history. How it informs. What it’s about. How it teaches. It gets very difficult for people like my generation. We knew nothing about Blackness. Nothing about poets. Nothing about any people who were involved with herstory and history. But, then we did that research at the libraries of America. Then we begin to teach it to our students. I remember Grace Boggs who said that her revolution was to share her and our experiences of successes and failures. She said exits and entrances are needed to make space for our souls. She was talking about making space for our souls to rescue us all from the tyranny of racism, sexism, homophobia, class, and economics. racial religious and anarchy. All of those things keep us from knowing who we are and what we must be.
Recommended anthologies on the Black Arts Movement are the classic 1968 book Black Fire: An Anthology of Afro-American Writing edited by Larry Neal and Amiri Baraka and the 2014 anthology SOS―Calling All Black People: A Black Arts Movement Reader by editors Sonia Sanchez, John H. Bracey, and James Smethurst.

Fannie Lou Hamer: The Right to Vote –
What it Took to Get Here