Saint of a New Generation
Advertisement 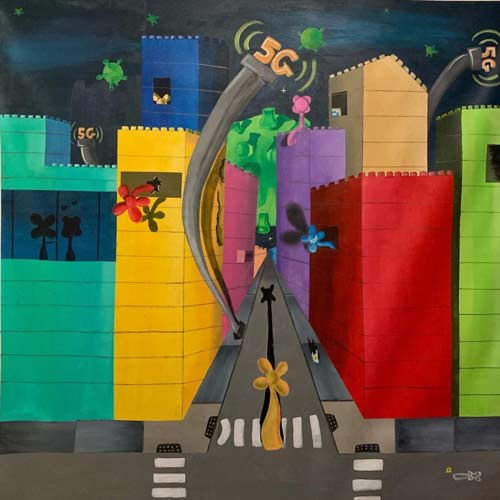 The artist Michael Saint-Claire Bush is not easily categorized. His actions, thoughts and style blend Generation Y and Z identifiers. He could be deemed, in fact, a member of the YZ Generation, a term that suggests blended lines.
He’s shattered a couple of barriers, already, nearing his mid-twenties. Getting his unique and heralded artwork on the walls of a SoHo gallery was a unique accomplishment, in itself.
After six months of telling the owner that his work should be exhibited, Saint was given that chance. His walk-in cold-call, with out an agent, eventually led to a short-term contract and the sale of one of his artworks to a collector within days of its display, last winter. The details of that story is one for the annals of art history. In January unknown artist Saint’s work was hanging a few feet from Basquiat original prints.

And he was fine with it all. But looking making plans for something bigger. He didn’t necessarily want to sell his work. He had plans to go big in a different way: to display it for his community in a large outdoor or indoor venue, and he would finance it himself. He would finance it himself. The gallery in SoHo was a school for learning how to set it all up.
The gallery asked for more artwork. Columnist Victoria Horsford put him and his work on her wire. Interest in Saint and his work increased. A close relative passed, and he took some time out and travelled to Paris for a few days.
This was around he would learn later that the President had revealed to journalist Robert Woodward about changes in the air. Those changes would eventually impact Saint’s world. But he didn’t know it them.
And other Changes were taking place all over America. Movements were happening, impacting moods. And Saint dovetailed between Harlem and California, canvassing new ideas; working. In April, he still had plans to get a space for his community showing. By end of May, the dream was put on pause.
We phoned Saint in Los Angeles, last night. He sounded like a veteran of a few wars fought by much generations, unlettered, so much older than his time.
But he had not lost the poet. He was still the wise, compassionate Saint we new. Now, working in the cloud of a New Renaissance of sorts.

Artist Michael Saint-Claire Bush Speaks
This will be my first-time voting. I just feel it is the right thing to do; it’s crucial; there is no option.
Do I think my vote will make a difference? No. Would I like it to make a difference? Of course.
I am voting is because it is crucial to vote.
Everybody is worried about what’s going to happen next whoever gets in office. It’s about what’s happening next time.
After the election, what happens to America?
I’m worried about how my family will be affected by everything. This political stuff is stressing.
It is kind of a mystery.
So, I approach the day the way I approach my art. I don’t know in what direction I’ll be going.
I do my paintings on iPad not so much the brush.
Will I make plans for the future, for a world I don’t know? If we don’t know, how can we plan?
Does “Black Lives Matter” to me?
Right now, the question is:
do I matter to them?
I feel now we’re not getting anywhere. The outcomes are the same. But the question of the century is: will I matter?
Right now, I’m working on a painting about the public-school cafeteria — I’ve been reminiscing about those times.
I recalled that the most famous drink for every kid in public school in New York City was the juice in those Suncup cartons. We were told to drink that juice because it was good for us.
On the carton there’s a flower holding the Suncup. It made us happy then, but it’s turned out it wasn’t good for us at all.
So personally, I’m not concerned about COVID-19. I am concerned about the dragging of time.
I want to see the world.
all photos/Barry L Mason