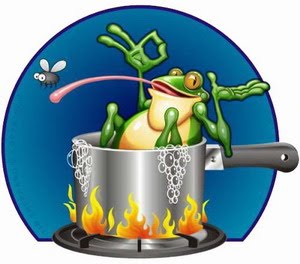 There is a parable that I’d like to share with you today, and it’s called “The Boiling Frog”. The parable says that if you were to take a pot and fill it with boiling hot water, and you tried to throw a frog into that pot, the frog would jump right out of it. However, if you took the same pot, filled it with lukewarm water, placed it on the stove and made it so that the temperature of the water would gradually increase, you could drop the frog into the water and he’d stay relaxed in the soothing water, oblivious to his fate until it was too late.

We have no doubt witnessed gradual change in our government over the past 14 months. We’ve gone from a President who was polished, reserved and obviously committed to his wife and family, to a President who tweets everything he thinks, speaks to people and about people without any filter, and has openly discussed womanizing on misogynistic levels. We’ve watched as Trump called for the building of a wall to separate Mexico from America, called for Muslims to be banned from traveling into the country and called for transgender citizens to be banned from the military. We’ve watched as he tweeted threats to North Korea, and threats to James Comey, and threats to CNN, NBC and other news sources, plus anti-Muslim videos. We’ve watched him refer to Elizabeth Warren as Pocahontas while talking with the Navajo Code Talkers. We’ve watched him toss paper towel rolls like basketballs at Puerto Rican citizens whose lives were in calamity due to the Hurricane Maria. We’ve also watched as world leaders, who just 14 months ago shared great relationships with President Obama, now refuse to shake the hand of our new President.

We’ve watched as hate crimes have increased in our country, and hate driven by ignorance has once again begun to fester. We’ve watched mass shootings become weekly occurrences, and the renewed resurgence of racism renamed white nationalism, or alt-right. We’ve watched as groups like Black Lives Matter have been labeled as terrorists, while the Ku Klux Klan marches through our southern towns again, sheets freshly pressed. Gradual changes that haven’t yet burned us.

This past week, the Senate passed a sweeping tax bill which will affect the middle class and the poor while giving even more tax breaks to the rich. Trump praised the bill as the biggest tax cuts in history, but he didn’t make it clear who was getting the cuts. The bill tells the tale though. Then this week, Trump took it upon himself to declare that Jerusalem is the capital of Israel, controversial because the decision about Jerusalem should be left in the hands of the Israelis and Palestinians and not decided by a new President looking to use his influence to cement Israel’s power in the region.

Slow, steady, incremental, successive changes that we have watched over the last 14 months. And though the common American is watching these events play out, it’s still from a spectator purview, our social media profiles and our jobs and our vacations still allowing for our comfort. Christmas shopping? Holiday cheer? Many of us have the holiday ham on our minds, a thing far more important right now than some tax bill you’ve never read.

But make no mistake, our country is getting hotter, like a cast-iron pot sitting over the flame. And if we don’t take action right now, we will be sitting in boiling water, still smiling, albeit too late to do anything about it.

Colin Kaepernick, Our Time Press Man of the Year