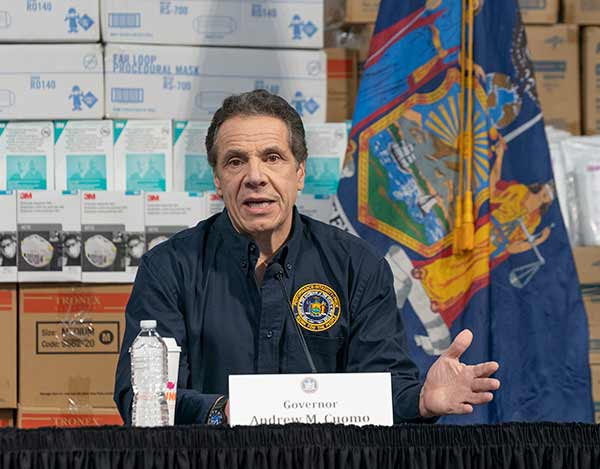 What to Know
New York, New Jersey and Connecticut are on “pause,” shutting down all non-essential businesses and enacting new density control measures; NJ says day care centers can only stay open if they care solely for essential workers’ children
As of Wednesday, more than 38,000 people in the three states had tested positive for COVID-19; at least 447 have died; NYC has more than 20,000 cases alone and three-quarters of the 366 deaths statewide
The doctor coordinating response for the White House Coronavirus Task Force says 50% of all new U.S. cases and nearly 1/3 of U.S. deaths are coming from the NYC metro area right now
Gov. Andrew Cuomo blasted the feds’ $2 trillion proposed economic relief package Wednesday, saying it would be “terrible” for New York, which faces an accelerating rate of infection that doubles case count every few days and an economic shortfall worsened by each day of response to the crisis.
“We have 15 times the problem of the next state. Every state will have a different apex with this virus. New York is first,” Cuomo said Wednesday. The Senate plan, which still needs a vote before it goes to President Trump, would give New York $3.8 billion, a “drop in the bucket” compared with the up to $15 billion Cuomo says the state needs for the crisis. He’s already spent $1 billion.
“How do you plug a $15 billion hole with $3.8 billion? You don’t,” Cuomo said. “The House bill would give us $17 billion. That’s a dramatic difference.”
The rapid infection spread has hastened the approach of the “apex” of the crisis in New York, Cuomo said. The wave, now more like a tsunami, could crash on the health care system in three weeks rather than 45 days — and with life-saving supplies already heavily depleted, New York is increasingly desperate for resources to get through just the immediate future. Mayor Bill de Blasio has said he expects the crisis to be worse in April than in March, potentially even worse come May — and no one should get their hopes up that everything will be back to normal by Easter.
De Blasio also vented his frustration with the stimulus bill, saying in a Twitter thread that the bill is “nowhere close to what we need to fight this epidemic,” and the city getting “$1 billion out of a $150 billion pot does not reflect reality.”
The predicament is such that the Columbia ER doctor who famously survived Ebola a few years ago, and now finds himself on the front lines of the COVID-19 war, says he’s more fearful of the new virus than of the one that nearly killed him.
As of Wednesday night, nearly 33,000 cases had been confirmed in New York, an increase of more than 7,000 from the day before. At least 366 people have died. The city, impaired by the density that makes it one of the world’s most vibrant places, bears the brunt of the impact, with more than 20,000 cases across the five boroughs as of Wednesday night. The mayor’s office said the death toll had soared to 280, the biggest increase in deaths the city had seen so far.
One hospital in the city, Elmhurst Hospital in Queens, had 13 patients being treated for COVID-19 die over the span of 24 hours, according to NYC Health & Hospitals. In a statement, the hospital group said the number was “consistent with the number of ICU patients being treated there,” with Elmhurst being “at the center of this crisis.”
Faced with mounting deaths, the city medical examiner is building a makeshift morgue in Manhattan, City Hall said. The measure, which has been used in the past during mass casualty events like 9/11, falls within the purview of the city emergency declaration that de Blasio signed weeks ago, a spokesperson for the mayor’s office said. To date, more than half (52 percent) of NYC fatalities have been people 75 and older; 3 percent of victims are younger than 45, according to the city’s data. But most of the total cases (56 percent) are impacting people younger than 50; 2 percent of NYC cases as of Wednesday are people no older than 17.

Related Topics:new york
Up Next

MS. MARKLE WAS HAVING NONE OF IT