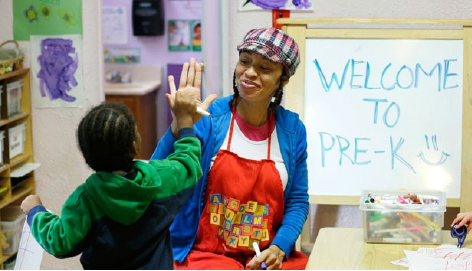 Alice Mulligan got on the loudspeaker at her Brooklyn preschool Monday morning to make an unexpected announcement: her teachers would be getting significant raises.

“Everybody started screaming,” recounted the director of Our Saviour’s Lutheran Preschool preschool.

She added, “They so deserve it.”

Moments earlier, city leaders announced a $57 million agreement to boost pay for teachers in publicly funded but privately-run preschool programs that aren’t unionized. That would raise salaries by October 2021 to about $69,000 for certified teachers with master’s degrees — the same amount first-year teachers in public schools earn.

It follows recent pay deals with unions representing pre-K workers. Since most centers aren’t unionized, however, those agreements did not apply to about 1,500 teachers who will soon see a salary bump.

New York City depends on a mix of public schools and privately-run centers to provide enough seats for Pre-K for All, the ambitious universal preschool program launched by Mayor Bill de Blasio in 2014. Most of the roughly 70,000 children enrolled in programs for 4-year-olds — 60% — attend a community-run classroom.

But the city’s contracts with those programs assumed much lower salaries than those in public school pre-K classrooms, and that meant that many of the most qualified teachers in these centers would ditch them for the higher paychecks afforded by the education department. The pay gap was particularly striking because many teachers in community organizations are women of color, while most public-school teachers are white.

“We would lose experienced teachers at rates that produced alarming problems for community-based providers,” said Susan Stamler, executive director of United Neighborhood Houses, an organization that represents 42 neighborhood settlement houses and advocates for policy change. “This is an important step for the workforce.”

This spring, as de Blasio eyed a run for the White House, union teachers had threatened a strike over the pay gap. But the walkout was called off after the city and providers agreed to come to the bargaining table.

Though pay inequities have persisted for years, the city’s ongoing overhaul of the contracting system for early childhood programs helped spark an intense wave of activism. In an effort to create a more streamlined system for early childhood education, the responsibility for publicly funded preschool and childcare programs is shifting to the education department and away from the Administration for Children’s Services, the city’s child welfare agency.

Advocates seized the moment, arguing that the shift provided an opportunity to correct historic inequities in the workforce. They won support from City Council members, who threatened to hold up budget negotiations if a deal was not struck.

“I think there’s a great sigh of relief that the administration, the City Council, they’ve been true to their word,” said Jennifer March, executive director of the Citizens’ Committee for Children, an advocacy group. “And everyone will benefit, which is a good thing.”

Between the deals for both union and nonunion teachers, the city expects to spend $84 million by 2023, when the raises are phased in completely. Support workers who don’t belong to a union will also see their paychecks grow, though far more modestly. A 2% boost will kick in September 2020, with a 2.75% increase in October 2021.

The question now is whether teachers in community organizations can keep pace with their counterparts in public schools, who are represented by the United Federation of Teachers. There is reason to think they will. With the latest agreements, contracts for pre-K workers are in the same bargaining cycle as the more powerful teachers union. That means private pre-K workers will likely benefit from the pattern that any UFT contract sets — and the union deals help set the table for non-union salaries.

“That is the larger, important implication of the way this was done. It means parity will always be front and center,” March said.