Have You Ever Been to The Brooklyn Bank?
Advertisement 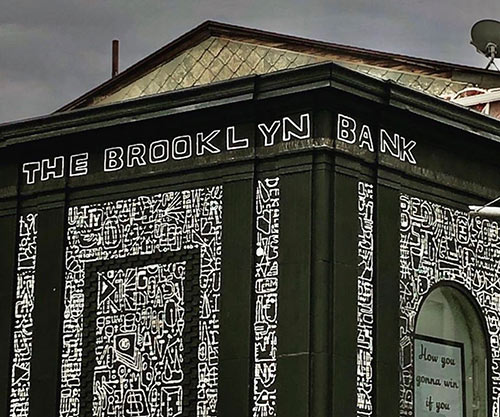 Eleven years ago I worked with a woman named Deborah Wright with a restaurant that she had opened in Clinton Hill, The Speakeasy. My title was Brand Consultant, but I spent most of my time at the bar talking with the staff, listening to their stories about the business. The writer in me has always been chasing the story. Anyway, I’m at the bar one evening slacking off with the staff and Deborah walks in with a group of friends. I straightened up and acted like I was in the middle of an intense Q and A. Deborah called me over to her table to introduce me to her group. One by one, she introduced me to each of them. This is so and so, so and so this is Marlon. This is so and so, so and so this is Marlon. Finally, she got to the guy at the table. She said, Marlon this is Jude Bernard, Jude this is Marlon. I had heard the name before. Another friend of mine used to tell me about a secret card game that a guy named Jude Bernard used to organize. I don’t know why, but the first thing that came out of my mouth was, “Yes, you’re the guy that throws the card games.” The whole table laughed. Jude shook his head, “Nope, you got the wrong guy.” I returned to the bar and sat for a few trying to figure out why on earth would I say exactly what I was thinking.

Over the years, Jude and I have gone from complete strangers with a weird introduction, to friends with common interests. He probably doesn’t even remember our first introduction, at least he’s never mentioned it to me. He definitely doesn’t throw secret card games anymore. Jude has been quite vocal about his journey to get to this point. A real estate guy that was worth millions at the beginning of this century, Jude lost it all in the Great Recession of 2008-2009. Around the time of our first introduction, unbeknownst to the idiot who dry snitched about knowing about the card games, Jude was in the hole for about $1 million, seven properties in foreclosure and no real way out. But Zig Ziglar says that if you’ve learned from defeat then you haven’t lost. Jude experienced defeat, but the things he learned from it gave him so much more than what he lost.

On MLK Day 2018, Jude opened The Brooklyn Bank at 896 DeKalb Avenue in a landmark building that was once itself an actual bank, and then a church. His first event? A wealth building event and discussion. The inaugural event of the Brooklyn Bank was an informative discussion attended by a few dozen people about how to build and maintain wealth. The guy who had it all and lost it all committed to building an environment for others to learn from his mistakes. On the mission of the Bank, Jude says, “The plan was to have a place for us to learn and understand about finances. Initially the goal was to focus solely on financial literacy, but we have found ourselves trying to better the community in different facets; from giving out turkeys at Thanksgiving to giving out school supplies in September.”

The Bank has done so much more. They’ve offered this community the opportunity to take family portraits, and they have given toys to kids. They’ve hosted a summit for the Black running community and they’ve celebrated young Black men going off to college. And this past MLK day, for the third year in a row, The Brooklyn Bank hosted their annual Wealth Forum. On this year’s wealth forum, Jude says, “with the wealth forum, we fulfilled our mission of taking the financial information that is usually tightly held by a small percentage of the population and sharing it with our community. On this day of service, we honor Dr. King by focusing on economic empowerment and arming our family with the tools to propel them towards economic equality, a prerequisite for equality as a whole.”

On the first weekend of January my running group had a group run in Prospect Park. I dropped Jude off at his house after the run. On the way, I told him that I admired the things he does for this community, knowing all too well that simple but poignant acts of kindness and equity can go unnoticed in this world. He turned to me and said, “I learned so much from having it all and then losing it all. Everything I do now comes from that.” If the product of Jude’s defeat is a true community gift like The Brooklyn Bank, then he’s never really lost. The Brooklyn Bank is a center of information and service, built by a man who found out through losing that the greatest success is service.

A Father and His Daughter