Ed Gordon vs. Omarosa at the NABJ Convention!
Advertisement 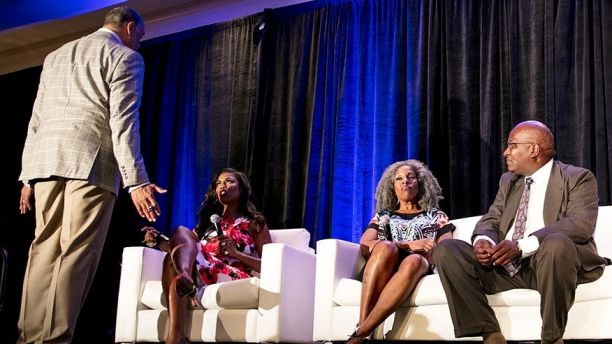 I could care less about the chilly reception that Omarosa received at the NABJ Convention in August 2017. It was to be expected. Everybody involved knew what that was!! NABJ knew before inviting Omarosa that she was a piece of work! Omarosa knew before she accepted the invitation that she was going to be asked the tough questions by the moderator Ed Gordon. And Ed Gordon knew that Omarosa was not about to let him control her in a question and answer session. Its called grown folks doing grown folks. However, the one thing that I am not feeling is Ed Gordon walking from behind that podium to stand over Omarosa. Ed Gordon absolutely aggressed Omarosa at the NABJ Convention. His behavior even bordered on abusive. Im a big fan of Ed Gordon and have loved him his entire career, because he is a stellar journalist. But I cant ride with him on this one. NOPE!! I dont give a #CLUCK what Omarosa said or how Omarosa answered the questions. Ed Gordon is a grown man and had ZERO business stepping away from that podium to stand over Omarosa as if he was trying to intimidate her. There is a podium for a reason, TO STAND BEHIND IT!!

I found it very hypocritical of NABJ to have a panel titled “Black and Blue: Raising Our Sons, Protecting Our Communities”,†and yet they allowed Ed Gordon to get physical with Omarosa like that without intervention. And yes, once Ed Gordon stood over Omarosa she absolutely needed to stand up to protect her space. I was very upset watching how Ed Gordon treated her. I was even more pissed that everyone who attended the conference felt his behavior was OK; almost egging it on. Are we at a place in the Black community where if we donít like someoneís career decision or political affiliation, itís OK to bully them?? Would Ed Gordon have gotten in a Black manís face like that who didnít respond to his questions the way he wanted him to?? NOPE!! Would Ed Gordon be OK with some grown ass man aggressing his daughter in that way?? HELLTO THE NO!! No father would be OK with that: PERIOD! It was uncalled for and downright disrespectful. He never treated any of the other panelists that way so why did he feel comfortable doing it to Omarosa?? To make matters worse, Ed Gordon, who was the moderator, allowed some other dude from the panel to ask her questions when that wasnít his place to do. That entire scene was adult bullying plain and simple. I was shocked that it took her so long to walk off the stage.

Omarosa says she agreed to attend the NABJ Convention to discuss the affects her fatherís and brotherís murders had on her life. Yes, it made total sense that moderator Ed Gordon would also ask her questions about Donald Trump based on her position in the White House, whether she liked it or not. However, she didnít have to answer them to his satisfaction either. Thatís called freedom of speech. My thoughts are, why didnít Ed ask Omarosa any questions about the violence she experienced in her family as well?? Why was he only asking Omarosa questions and not the other panelists?? If Ed Gordon only had plans on asking Omarosa questions, then this should have been a one-on-one instead of a panel. Omarosa said she felt that the NABJ Convention was a witch-hunt. I really hope sheís wrong.

Let’s have a Black History Year