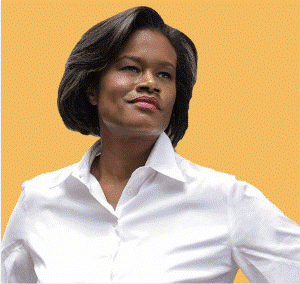 ]In a crowded Public Advocate race filled with city and state elected officials, it is interesting to note that Dawn Smalls, who has no elected political experience, was one of the first to turn in her petition filings to the Board of Elections last week.

But Smalls is no novice to political and government experience. An accomplished attorney and litigator, she started her government career at the very top in the 1990s Bill Clinton White House, where she served as Assistant to the White House Chief of Staff John Podesta and Erskine Bowles, and as a liaison on policy and budget issues for the District of Columbia.

She later served in the Obama Administration as Executive Secretary of the Department of Health and Human Services (HHS) under Kathleen Sebelius. In this capacity, she served as the chief regulatory officer for HHS, which represents almost a quarter of all federal outlays and administers more grant dollars than all other federal agencies combined.

This is the kind of valuable professional and work experience that Smalls would like to bring with her to the Office of the Public Advocate.

“I’m deeply experienced, but not deeply entrenched in the local machine,” said Smalls, noting that the role of the Public Advocate is to provide a check on both the mayor and the City Council where need be while keeping cognizant to her progressive values as an independent outsider.

In regard to specific issues, Smalls states that one of her priorities as Public Advocate is to make sure the New York City Housing Authority (NYCHA) is managed and serviced properly.

“NYCHA has been an abject failure to provide basic livable housing to people who pay rent and live in those units. It is incumbent on anybody running to take on NYCHA as a first and foremost priority. NYCHA is an example of failure of government on all levels in doing its job,” said Smalls, while insisting that NYCHA remains under city managerial control and not go under federal receivership.

“Public housing is largely funded through the federal government and given this [Trump] Administration, we want to keep this as far at arm’s length as possible,” she said.

“I’d also like to see getting 17-year-olds preregistered to vote so that they are ready to go as soon as they turn 18,” she said.

In regard to the city’s clamping down on the shared housing industry such as Airbnb, Smalls said there is a need to strike a balance.

“One of the top priorities has to be affordable housing and we have to look at anything that takes substantial [housing] stock off the market. On the other hand, we are squarely in an economy where a lot of people want flexible schedules to pursue business and passion and to do something else to pay the bills. I’m for really cracking down on developers using the shared housing economy as hotels, but it should be available to people who want to share their homes as a means of earning extra income,” said Smalls.

Smalls said her biggest concern, though, is allowing for more affordable housing. There are more children living in homeless shelters than ever and it is directly tied around the real issue of affordable housing, she said.

Smalls said it is significant that former Public Advocate Letitia James was recently elected as Attorney General as a woman of color, and it would be great to again have a woman be Public Advocate.

“I believe I’m the most qualified candidate in this race. I’m independent of this particular mayor and the only candidate outside of the political machine,” said Smalls.

“Of all the candidates, I’m one of the handful that are lawyers and even among a smaller group that is an experienced litigator. And one of the powers the Public Advocate has is the power to litigate. I think it’s important for voters to understand that as well when choosing their candidate.”

SHE BRINGS IT HOME!