Will a provision in the Inflation Reduction Act help Black communities get environmental justice? 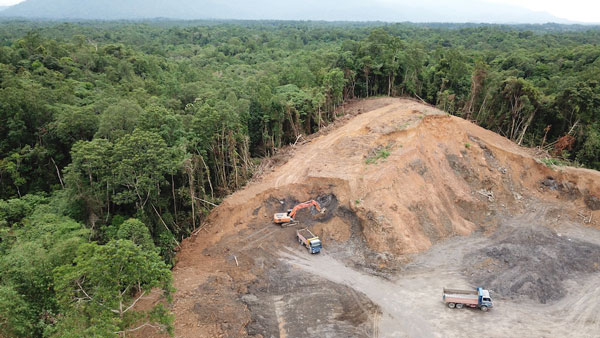 Patrick Greenfield, Jonathan Watts, Phoebe Weston and Fiona Harvey
The Guardian.com
World leaders have agreed a deal that aims to halt and reverse global deforestation over the next decade as part of a multibillion-dollar package to tackle human-caused greenhouse gas emissions.
Xi Jinping, Jair Bolsonaro and Joe Biden are among the leaders who will commit to the declaration at Cop26 in Glasgow on Tuesday to protect vast areas, ranging from the eastern Siberian taiga to the Congo basin, home to the world’s second largest rainforest.

Land-clearing by humans accounts for almost a quarter of greenhouse gas emissions, largely deriving from the destruction of the world’s forests for agricultural products such as palm oil, soy and beef.
By signing the Glasgow Leaders’ Declaration on Forest and Land Use, presidents and prime ministers from major producers and consumers of deforestation-linked products will commit to protect forest ecosystems.
Boris Johnson will unveil the agreement at an event attended by the US president, Joe Biden, the Prince of Wales and the Indonesian president, Joko Widodo. He is expected to say: “These great teeming ecosystems – these cathedrals of nature – are the lungs of our planet. Forests support communities, livelihoods and food supply, and absorb the carbon we pump into the atmosphere. They are essential to our very survival.”

The commitment on nature and forests comes as more than 120 world leaders came together in Glasgow to thrash out fresh commitments on cutting greenhouse gas emissions, amid concerns that key countries have failed to step up.
On a day devoted to speeches by presidents and prime ministers that underlined the scale of the challenges ahead, Johnson said future generations “will judge us with bitterness” if the conference fails. Other key moments included:
India pledged to reach net zero emissions by 2070. Although it is the first time the world’s third biggest polluter has set this target, and experts said it was a realistic commitment, it is 20 years behind the 2050 date set agreed by other developed countries.

President Biden warned that greater urgency was needed at the talks: “Right now, we are falling short. There’s no time to hang back, sit on the fence or argue amongst ourselves.”
António Guterres, the UN secretary general, said the world was being driven to the brink by an addiction to fossil fuels. “We are fast approaching tipping points that will trigger escalating feedback loops of global heating,” he warned.
In a recorded message, the Queen called on leaders to “rise above the politics of the moment, and achieve true statesmanship”. She added: “Of course, the benefits of such actions will not be there to enjoy for all of us here today: we none of us will live forever. But we are doing this not for ourselves but for our children and our children’s children, and those who will follow in their footsteps.”

Following his own speech, Johnson provoked some ridicule by admitting he would fly home rather than take the train.
Shortly before, he had told a roundtable of leaders of developing nations: “When it comes to tackling climate change, words without action, without deeds are absolutely pointless.”
The commitments on deforestation are an early win for the UK, which as host nation bears responsibility for forging a consensus among the nearly 200 countries present, amid concerns that an overall commitment on cutting greenhouse gas emissions by the 45% scientists say is needed this decade will fall short.

The political declaration, which is voluntary and not part of the Paris process, is one of a range of side deals that the UK presidency is pushing for at the climate summit in Glasgow alongside others on methane, cars and coal.
The package includes £5.3bn of new private finance and £8.75bn of public funding for restoring degraded land, supporting indigenous communities, protecting forests and mitigating wildfire damage.

A pledge from CEOs to eliminate activities linked to deforestation, and £1.5bn funding from the UK government for forests, are also part of the deal. £350m of that will go to Indonesia and £200m to the Congo basin, with a new £1.1bn fund for the west African rainforest.

While the forestry agreement has been cautiously welcomed by ecologists and forest governance experts, they point to previous deals to save forests that have so far failed to stop their destruction, including in 2014. But this time, the EU, China and the US alongside major forested countries like Brazil, the Democratic Republic of the Congo and Papua New Guinea will all sign the commitment.

Many details need to be clarified, particularly how the money is spent, according to Carlos Rittl, who works on Brazil for the Rainforest Foundation Norway. “Big cheques won’t save the forests if the money doesn’t go into the right hands,” he said, emphasising that it should go to indigenous groups and others who are committed to protecting the forest.
In a separate announcement, at least £1.25bn of funding will be given directly to indigenous peoples and local communities by governments and philanthropists for their role in protecting forests.

But the promised funds still fall far short of what some believe is needed. “We are undervalued and our rights are still not respected,” said Mina Setra, an indigenous rights activist from Borneo. “A statement is not enough. We need evidence, not only words.”