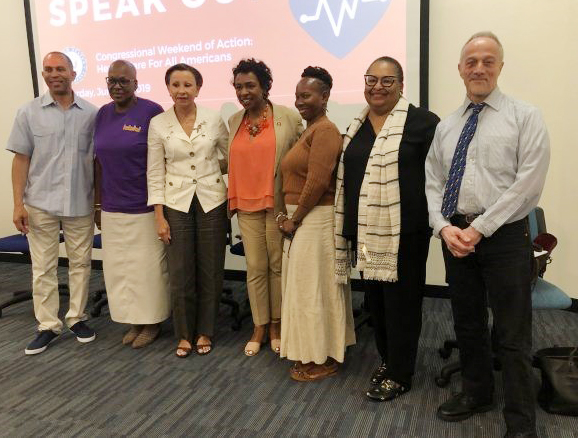 It seems like getting sick will cost you an arm and a leg – literally. The ongoing health care- and prescription- drug catastrophe is a conversation and debate that will continue until Washington comes up with some resolution. Who are the people that suffer? You bet your bottom dollar, the American people.

LaRay Brown, CEO of 1 Brooklyn Health System and CEO of Interfaith Medical Center, explained that commonly used drugs have doubled in price between the years 2012-2016.

Patients who live with diabetes that need their insulin to live can expect to pay around $630 a month for one month’s supply for the drug Novolog. Brown also went on to note the soaring cost of Morphine and Opioids that is becoming a serious issue for Interfaith Hospital. Interfaith uses the drugs for operating rooms and the ER. The increasing cost of health care is also noticeable when it comes to certain types of cancer treatment. Like the newest cancer treatment, known as Chimeric Antigen Receptor (CAR-T), first introduced in 2018, ranges from $373,000 to $475,000 a year. The price ranges have left many patients with a choice of having to pay an astronomical price for a lifesaving drug or take an alternative and hope to get better. Another factor in the equation is the drug shortage, which increases the price.

“Drug shortages are a huge problem, and health care workers are forced to either work around it or pay top dollar for medicine. According to a recent study, drug shortages cost the U.S. health system approximately half-a-billion dollars every year. Due to drugs being generic and on the market for a long time, they experience a low-profit-margin, leaving them with less incentive for the manufacturers to produce them,” said Brown.

One of the solutions discussed at the event would be to speed up the Federal Drug Administration (FDA) drug approval process. Some generic brands of drugs can take anywhere from three to four years to get approval. Congressman Jeffries made it clear that all three federal lawmakers were elected to lower the cost of health care to protect people with preexisting conditions, to strengthen the Affordable Care Act (ACA) and to deal with expensive prescription drugs.

“We believe that in the United States of America no individual, particularly our seniors, should ever have to choose between putting food on the table, paying rent or getting access to the medicine they need to live with grace and dignity,” Jeffries stated.

Congresswoman Velazquez put the blame on the Trump Administration for all the health care troubles; stating, “We work too hard for the people, and we will fight them on the streets and in the courts.”

“Too many complaints are with the phone system and when a call is made to either doctors’ offices, insurance companies or the pharmacies, it can be confusing to seniors who are by themselves, or a disabled person. Another problem that was mentioned earlier is the cost of prescriptions,” said Hobbs.

Hobbs went on to tell the audience that one of her medications cost $500 and the generic $150, which was still too much for her.

Congresswoman Clarke shed some light to the crisis, voicing her opinion on the “rigged” system.

“Anything that President Trump says and does is to the benefit of him and the wealthy. At the end of the day, it’s not about research and development, it’s about profit and greed [P&G],” said Clarke.

Clarke went on to note the seriousness of the issue, anecdotally telling the crowd how she wakes up every morning with a little anxiety about the “dishonest system,” yet she embraces the feeling, “Once we give in and relax, we’ve lost.”

Jeffries went on to emphasize that his goal is to work toward an agreement with President Donald Trump and the U.S. Senate to achieve better prescription drug pricing for all: “We are going to achieve this because it is shameful what is happening now.”

Another Perspective on An Important Education Issue