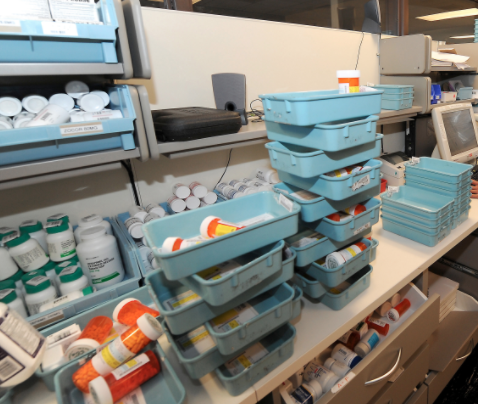 Two days after the US Senate presented Better Care Reconciliation Act to the US public, this reporter walked along the main thoroughfares of East Flatbush and Flatbush in pursuit of an open pharmacy. Surely, a pharmacist could make sense of a health care policy that would have a far-ranging impact on US citizens’ lives. With the federal subsidy to Medicare set to expire in 2021, millions of low-income Americans will either not have health insurance or insurance that inadequately meets needs.

Louis Jean was behind the plexiglass in his pharmacy on Flatbush Avenue off of Winthrop Street (store name withheld). Mr. Louis described himself as the owner of the pharmacy. When queried about the US Senate’s version of the National Health Care Act, he answered, “So many people will be hurt. With Medicaid going out, many people won’t know what to do”. What he means by “Medicaid going out” is by 2021 the federal government’s financial supplement to Medicaid will expire. Medicaid has been the public medical insurance that covered adults whose incomes are at or below 133 percent of the Federal Poverty Level.

We discussed the estimate that approximately 23 million Americans would be without health insurance coverage. Mr. Jean explained the “23 million estimate was based on the House of Representatives’ health care package. The Senate version is even worse. So many people will be left out because there won’t be Medicaid. People won’t be able to see a doctor or to afford the drugs”.

This gravely impacts Persons Living with HIV/AIDS, high blood pressure and those with diabetes. Jean’s estimation is that “People are going to die. When everyone has insurance, it is better for us; i.e., pharmacies”. His words underscore what President Barack Obama terms “mean-spirited”. When one considers nations such as Canada, France and England have single-payer insurance or “public medicine” and the nationals are adequately served and physicians earn six-digit incomes, it is a wonder why the United States persists with the existing model. When asked about what he thought of the name “Better Care Reconciliation Act”, Jean responded, “I think that the title is inappropriate. It should be Worse Care Reconciliation Act”.

Farther down Flatbush Avenue, off of Clarkson Avenue, was another pharmacy. Pharmacist Jackie Bissah agreed to share her perspective on the US Senate’s proposal. Ms. Bissah explained that she had read the New York Times’ summary of the 142-page document over night. Therefore, it was fresh in her mind.

With little prompting Bissah said, “It seems as though they really don’t care about most people in this country, especially those who are poor and sick. With the Affordable Care Act (ACA), Congress never really wanted us to have health insurance. With this one, they are trying to present it as costing less but this is by taking a lot of meat out of it”. What is the “meat” that Bissah refers to? “It is taking out maternity care, mental health services and opiate dependence treatment.” Bissah characterized it as “costing more for seniors, giving money to the rich—Donald Trump’s cronies. The rich are getting more tax breaks. ACA had the rich pay for the subsidies but now that won’t be the case”.

Ms. Bissah’s response to the question: “What is your impression of the name Better Care Reconciliation Act?” She blurted, “Egotistical…I think it is a joke”. In a world of sound bites, New York Minutes and news flashes, reading and reading for meaning is a lost practice for too many Americans. This short attention span and lack of critical analysis is Bissah’s other concern who explained:

“A lot of people will not read. Rather, whatever they hear on the news, they will accept it and sign up for it. For example, [it will be lost to the American public] that they are trying to make contraceptives an over-the-counter purchase as opposed to prescription.” This means people will pay out-of-pocket rather than through an insurance plan.

Returning to the “need to read” and do one’s own research, Bissah closed by saying, “People need to get the facts by going to secondary and tertiary sources. People are kind of lazy relying on one favorite source…people aren’t going to read the bill”. She may be indeed correct. Search engine optimization operates under the premise that people focus on the first page of results and stop looking after the tenth page of results. It is common to hold one news source above the rest. For some, CNN and C-SPAN are the gospel. Other people go with PBS News Hour or FOX News. Then there are those who take The Gospel as the gospel.

Providing affordable, quality health care is an issue with which the US Government has wrestled for decades. US Rep. John Conyers, Jr. (D-MI, 13) and US Sen. Ted Kennedy have been proponents of it for decades. Again, if such developed nations as Canada, France and England offer it to their citizens and Cuba’s democratic centralist political system can cover its population, what impedes the United States Government from doing so? Some say it is the big white elephant that rambles starkly in and out of the chambers on Capitol Hill. Some say it is the insurance industry lobby. Michael Moore produced, in 2007, a documentary entitled Sicko, which included a segment that listed the amount of donations given to several politicians that included the then-US President.

“The Unauthorized Psychoanalysis of Donald Trump”