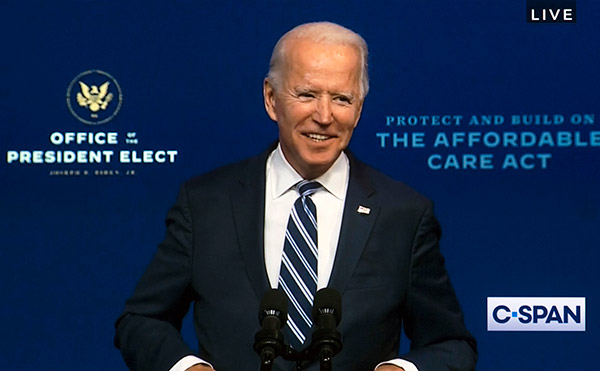 Joe Biden is President Elect and Kamala Harris is Vice President-Elect, having won five million more in the popular vote than the other guy, but the electoral college made it a nail-biter. That’s going to be a problem for some time.
Biden had been on a losing streak until Congressman Jim Clyburn’s endorsement in the South Carolina Primary, “I know Joe. We know Joe. But most importantly, Joe knows us,” Clyburn said. And the resulting outpouring of Black votes set Biden on his winning path. And the work of Stacey Abrams in Georgia and the Black vote in Pennsylvania and Michigan propelled by not only the abhorrence of the current administration, but by the efforts of thousands of people whose names we will never know who worked tirelessly to get their neighbors, friends and strangers, energized to come out and wait on lines for hours to vote. All of it together made Biden’s Electoral College victory possible.
In his winner’s speech, President-Elect Biden acknowledged the debt he owes Black voters by pounding the lectern and saying, “The African American community stood up again for me. They always have my back, and I’ll have yours.” This is a statement that we have never heard uttered by a candidate receiving our votes and he backs it up with his “Plan for Black America.”
We now have ten weeks left of Donald Trump as president and we could be entering the most dangerous time in our Constitution’s and nation’s history because he does not care what damage he causes to the country. A quarter-million Americans have died, and he simply does not care. He is only obsessed with his fear of losing and delusions of winning and therefore we will continue our suffering with a pandemic that is now out of control, infecting over a hundred and thirty thousand a day, a figure that is certain to rise exponentially in the coming weeks.
The next order of business is wresting the Senate gavel from Mitch McConnell and the only hope of that lies in the runoffs for Senate in Georgia with Democrats Jon Ossoff vs incumbent David Perdue, and Raphael Warnock vs Amy Loeffler. The outcome of these two races will affect us as a city, and around our kitchen tables, as it will determine how much of Biden’s “Plan” he will be able to achieve.
In April of 2016 we wrote, “I still find it hard to accept the cold reality that a lot of people believe Donald Trump should be President of the United States. After eight years of the class and elegance of the Obama’s, the Republican electorate finds the raging and mean mediocrity in both Trump and Ted Cruz far more attractive. It is a chilling thought, but there it is.” And now after four years of lies, racism and cruelty, an additional four million Americans, including 18% of Black men, still find Trump acceptable as a leader of the country.
On January 20, 2021, he will be gone, the question is how much destruction of the executive branch he will leave in his wake, making the work of Biden and Harris harder, and even more appreciated at home and around the world.

Quest to Save America’s Future DESTINATION: GEORGIA for OSSOFF and WARNOCK ELECTIONS in JANUARY 2021