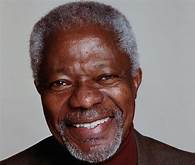 RIP: Internationalist and diplomat-extraordinaire KOFI ANNAN, 80, died in Switzerland last weekend. In 1997, he became the first sub-Saharan African to become Secretary-General of the United Nations, the world peace organization.   The Secretary-General for 10 years, Annan revitalized the UN and prioritized   human rights. His management style was known as “humanitarian intervention.”   A recipient of the Nobel Prize for Peace in 2001, his memoir, “Interventions: A Life in War and Peace,” was published in 2012.   He continued to mediate peace and conflict resolutions after he left the UN. In 2008, he was negotiating a post-election accord in Kenya. In 2012, he was summoned by the UN to join a group working on a settlement to end the Syrian War.

A UN civil servant since 1962, Annan began working with WHO, its World Health Organization. By the 90s, Annan headed UN peacekeeping operations. He navigated crises from Somalia to Rwanda, and to Bosnia.   During Secretary Annan’s watch, the world’s aggression proliferated. Al-Qaeda strikes New York and Washington, DC on September 11, 2001 and all hell breaks loose culminating with the US invasion of Iraq, an action opposed by Annan. Like his predecessors, Annan and the General Assembly must defer to the UN Security Council, the body responsible for maintenance of the peace and its 5 permanent members, the USA, France, United Kingdom, China and Russia, all of whom have a veto which can block aggressive actions.

Ghana-born Annan, scion of an upper-class Akan family, graduated from high school in 1957, the year that Ghana achieved independence from the United Kingdom, a matter of pride for all Ghanaians. He earned undergraduate and graduate degrees from colleges in Ghana, the USA and Switzerland.

RIP: The “Queen of Soul” ARETHA FRANKLIN, 76, passed last week after a battle with pancreatic cancer.   A vocalist, civil rights activist, fashionista and the ultimate natural Black woman, Aretha won 18 Grammys, the highest American music award and sold more than 75 million albums. She was the first woman inducted into the Rock and Roll Hall of Fame.  Her voice covered all genres, gospel, R&B, jazz, soul, pop, opera, an accomplishment which facilitated her ascent to the music world’s exalted heights and to superstardom. She was the American high priestess of American song, whose career spans six decades, peaking in the 60s and 70s, taking a detour and peaking again in the 90s.     Her discography boast songs like “I Never Loved A Man the Way I love You,” “Do Right Woman,” “Think,” “Dr. Feelgood,” “I Say A Little Prayer,” “Amazing Grace,” “Rock Steady,” “Until You Come Back To Me” and “Natural Woman,” which are really palliatives and meditations.   Her “Respect” is the women’s movement anthem, ipso facto!

Aretha performed at fundraiser concerts for Dr. King’s Southern Christian Leadership Conference and she was the most “in-demand” vocalist for inaugurations, appearing for Presidents Carter, Clinton and Obama. Her onstage performances, like her personal life, were rife with song and high drama. In reading some of the remembrances of her, many of her eccentricities dimmed like her preference for cash payments for performances. That would explain the handbag prominent during her live acts.   Her Kennedy Center fur coat saga….she wore it because she remembered the venue being cold, not good for her voice. Satisfied that it was comfy, she discarded the fur, tossing it to the floor.   Aretha was a mom at 13, who married a few times, but those interruptions did not obstruct her momentum.     She emerged as one of the brightest stars of her generation, a genuine American treasure.   The Aretha biopix must go into production soon.

For weeks, the Central Harlem residents and homeowners have been lamenting the loss of NYC-owned trash receptacles, found routinely on most street corners. With the absence of those receptacles, pedestrians toss garbage indiscriminately along the street.   Garbage-strewn streets invite rodents and, on West 132nd Street, raccoons and myriad health problems.   The garbage receptacles have been removed by NYC Sanitation from Harlem streets as far south as 120th Street and Lenox and as far north as 139th Street from Seventh Avenue west to Edgecombe and St. Nicholas Avenues. In addition to the newly littered streets, residents and homeowners are inundated with NYC Sanitation summonses for $100.     Continuous complaints to NYC Sanitation fell on deaf ears. Harlem-based NYS Assemblywoman Inez Dickens intervened and managed to get the attention of the New York Times.   See 8/20 NY Times story “NY Wants Tidy Streets, So It Cuts Back on Trash Cans” by Winnie Hu.

Hu’s story reveals that the problem exists all over NYC including the Upper West Side, Brooklyn Heights, Fort Greene and the South Bronx. NYC Sanitation has removed 1131 litter baskets in the past year. “Harlem has been the hardest hit.” The story spread like a contagion. Fox 5 TV, the NY Post and NY1 picked up the story and continued the media blitz to help restore garbage cans to affected areas.

For updates or to add info to this dialogue about missing garbage bins on your neighborhood street corner, join TRASHTALKINHARLEM. Go to HNBA@googlegroups.com and request permission to join. Read more about how to make your politicos more proactive.

HARLEM FASHION WEEK is the ultimate uptown destination during the frenetic NY Fashion Week season. The busy Harlem Fashion Week schedule begins on September 6 with an opening night charity gala at Harlem’s tony Renaissance Restaurant.   HFW hosts its Designer Press Conference, A Meet and Greet, at the Aloft Hotel in Harlem on September 7.   The HFW Runway Show will be held at the Museum of the City of New York. The HFW Independent Fashion Industry Summit convenes at the Schomburg Center on September 22.

The current AOL.com newsfeed includes a list of 10 CLASSICS EVERYONE MUST READ IN THEIR LIVES, compiled by AOL editors.   The list includes “Hamlet,” “Pride and Prejudice,” “Of Mice and Men,” “To Kill A Mockingbird,” “Elie Wiesel Night,” “The Catcher in the Rye,” “The Old Man and the Sea,” “Anne Frank: The Diary of a Young Girl” and “The Odyssey.” What happened to Black authors for that lineup, like Chinua Achebe’s “THINGS FALL APART”?