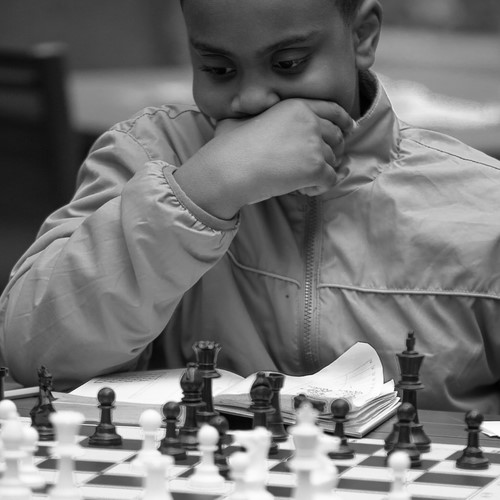 Young chess player Hamilton Shillingford is one who has a true interest in the game. He started learning when he was 4-years-old from his mother, and when he started getting better than her, he started getting taught by his dad. He developed a liking for chess and he didn’t really know why, but his interest continued to grow from there.

Hamilton has had the opportunity to practice with a stellar chess club in New York, the Marshall Chess Club. Names such as Brooklynites Alex Lenderman as well as Irina Krush have gone there to play in tournaments (nytimes.com).

The club, named after GM Frank Marshall, also has a foundation which has a goal to stimulate the love of learning and studying by young people through educational programs and lectures. They often have age-skill level tournaments as well. Also, where appropriate, the foundation supports the chess community through scholarships and direct financial support to those in need. You can visit them at marshallchessclub.org.

While interviewing Hamilton, I asked him about his very notable achievement, winning this year’s New York State Scholastic Chess Championship as the Elementary State Champion in Saratoga Springs, NY. When asked how he felt when he received a remarkable 6 out of 6 score, he said it felt good and exciting to receive such a score.

When he was about to play in the final round, there were only two players at 5-0, top-rated Tyler Tanaka from Quebec and 15th-seeded Hamilton. He had just defeated 5th-seeded Yassamin Ehsani in round five to set up the championship game.  Even though Hamilton was over 400 points lower-rated, he won the game finishing in a clear first!

It is also evident that Hamilton had people to support him in his chess growth at the Dalton School, and when asked how it felt to transition from elementary to a new school, Hunter College High School, as well as perhaps changing teams, he replied that it was not that unfortunate.

It will be nice for him to continue and practice with those same people as before as he continues to grow as a chess player.

Finally, Hamilton has proven to have a significant fondness of Bobby Fischer, the first American world champion who reignited American chess. On Hamilton’s Web site, fishingforfischer.com, he writes Bobby’s quote, “Chess is life”, and when asked why he agrees with the statement, he replied that chess is something that helps you focus/concentrate, and chess is full of calculation, as is life, what to do, how you do it, as well as how there are ups and downs in both life and chess, and you just have to learn from them.

Bobby Fischer also impacts Hamilton personally, as Hamilton has studied many of Fischer’s games, he also has a book of his games and he believes studying Fischer’s games will help him grow as a chess player.

When asking Hamilton about whether he would want to continue chess as a career, he said he wasn’t sure if he would want to pursue it as a career, but rather just as a hobby. However, with his 1774 rating and the amazing interest he has for chess, as well as just the overall advice he gave for others, it shows that he is hardworking and that he may not only prosper in the field of chess, but other things as well. I do not doubt that we will be seeing a lot from this young man.

Them Chickens… They always find their way home.

A Rally for Colin Kaepernick* Brooklyn Bridge Pier I September 14, 2017