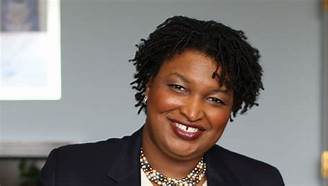 Congrats to Ms. Stacey Abrams, who won the Georgia Democratic Primary on Tuesday for Governor.   A former liberal statehouse leader, she is Georgia’s first Black nominee for Governor.   Can a Black woman win in the Deep South?

Harlem Democrats hosted a fundraiser for Brooklyn Congresswoman Yvette Clarke at Londel’s Restaurant, which was attended by most of the uptown political grandees. Yvette Clarke has been a member of Congress since 2007. Before that, she was a NYC Councilwoman. Her mom is Una Clarke. She faces a Primary challenger, Adem Bunkeddeko, who is a well-funded upstart with supporters like Vernon Jordan and former NYS Lieutenant Governor Richard Ravitch. Bunkeddeko is a Harvard B-school alum. More than 594 Black women are running for elective office this year, according to the Black Women in Politics organization, which published a recent report, “The Chisholm Effect: Black Women in Politics 2018.”  Since 2013, eight Black women have been elected mayor in the 100 most populous U.S. markets in cities like Baltimore, Maryland; Washington, DC; Baton Rouge, La.; Charlotte, NC; Atlanta, Georgia; and New Orleans. Black women make up 3.6% of the US Congress. HARLEM gentrification and its discontents: Three African-American women were racially profiled at the Angel of Harlem Bistro, located at 2272 Frederick Douglass Boulevard, in February. The manager accused the women of frequenting the site a week earlier and leaving before paying the bill. The women denied any wrongdoing, admitting that evening was their first there. Manager pulled out video on his phone to prove that the women were the ones on his screen. After viewing cell phone video, the women said that there was no resemblance between them and the offenders. They told the white manager that “we do not all look alike.” He got   testier, snatched menus from them and pushed one of the women outside. Last month, the NY Daily News reported that the three women filed a lawsuit against the establishment.   When asked to comment about the incident, owner Anahi Angelone would only say “there are two sides to every story.” Angelone also owns other Harlem restaurants: Corner Social, Cecil’s Steak House and Minton’s.

BROOKLYN:   Haiti updates on Haitian Flag Day. Haitian and local politicos celebrated Haitian Flag Day and talked of the imminent arrival of a “Little Haiti Business and Cultural District in Flatbush.” Little Haiti would border Avenue H, Brooklyn Avenue, Parkside Avenue and East 16th Street. Official designation of the area awaits City Council approval. Brooklyn Borough President Eric Adams enthused. “Little Haiti is an idea whose time has come. Brooklyn is the Port-au-Prince of America, and it’s time for the world to know and experience all we have to offer.” Brooklyn has more than 90,000 Haitian-Americans, the third-largest in the United States. BLACK ENTERPRISE

RIP: My brother, New Yorker Rocky Horsford, 67, died at his Bronx home on May 18. He was the youngest of four children born to Caribbean immigrants Lillian and Victor Horsford from the Dominican Republic and Antigua, respectively.   He married his childhood sweetheart Karen Wingate and they had nine plus one children.   Their daughter, Gloria Torruella, died last December.     He cut his teeth early in entrepreneurial projects as a realtor, grocer, investor in entertainment principals like Chris Brown and Omega, a Dominican vocalist. He owned and managed a plumbing contracting company and a general contracting company. He was a globe-trotter, oftentimes marrying travel to business opportunities in Ghana and Nigeria; and possibly to all but a few of the Caribbean Basin countries.   He is survived by his wife Karen, nine children and close to 30 grandchildren and great-grandchildren.

Funeral arrangements have been finalized. The Viewing will be held on Friday, May 25th from 4 pm to 7 pm.   The funeral service will be held on Saturday, May 26th at 10 am. Both will be held at Mt. Olivet Baptist Church, located at 201 Lenox Avenue at 120th Street in Harlem.