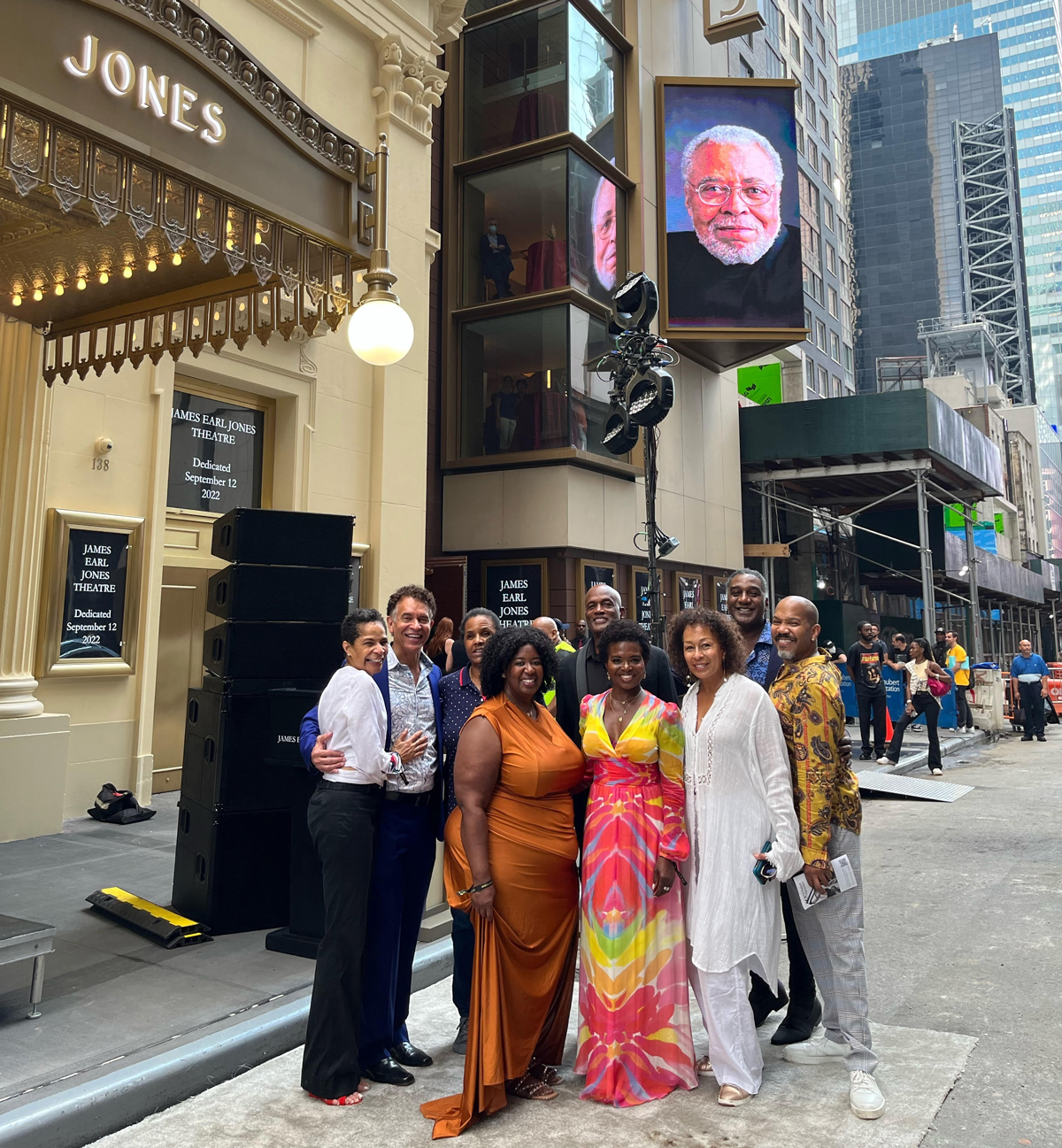 In the summer of 2020, in solidarity with the Black Lives Matter movement, The Shubert Organization, America’s oldest professional theatre company and the largest theatre owner on Broadway, embarked on a mission to rename the Cort Theatre after a prominent BIPOC theatre legend upon completion of construction. The search was short-lived because it led quickly to a recognized “lion king” of an actor — James Earl Jones.

This past Monday, Shubert officially dedicated and revealed the newly renamed James Earl Jones Theatre (138 West 48th Street) in honor of the multi-award-winning American actor. The dedication ceremony follows a $47 million complete restoration and expansion of the building. And it is a masterpiece of a theatre and architecture.

The official dedication ceremony included special performances by Emmy winner Brian Stokes Mitchell and Norm Lewis, along with remarks from Wankel and Adams as well as the unveiling of the stunning new marquee, itself a showstopper with James Earl Jones’ supersized smiling visage lighting 148 Street between 8th & Broadway.

Over the course of the COVID-19 pandemic, Shubert, with the help of architect Francesca Russo, performed extensive renovation and construction work on the theatre. The result: brand new seating; rich, lush carpeting; tiled walls in the basement; gigantic floral motifs on the wallpaper, and a mist of bronze, amber, peach tones throughout. A new contemporary annex, designed by Kostow Greenwood Architects, expands accessibility, increases public space, adds dressing rooms, a grand staircase, elevator, and rehearsal space, and enhances the beauty of the 110-year-old theatre. But to Shubert’s credit, although the look and feel of the old Cort Street is transformed by these enhancements, the old Cort Theatre and its histories are at home here. And so is James Earl Jones’ — in an association with the historic old Cort.
When Jones made his Broadway debut 1958 at the Cort Theatre in his first role in Dore Schary’s Sunrise at Campobello, he was engrossed in his lines, not imagining his name on the front of the building, and his smiling visage lighting Broadway on a huge marquis. There’s no question he earned this grand spotlight. More than six decades later since his first Broadway performance, Jones’ portfolio includes starring in 21 Broadway shows and countless screen productions, earning him the coveted EGOT (Emmy, Grammy, Oscar, and Tony Awards) distinction.

“The dedication of the James Earl Jones Theatre honors one of the most beloved Broadway and film actors of all time,” Mr. Wankel said at the event. “It’s fitting that the renaming of this beautifully restored building also be a moment in which to recognize the tremendous contribution of BIPOC people to Broadway. Mr. Jones’s name quickly rose to the top of the Shubert Organization’s list due to his illustrious career performing in Shubert houses, his status in the Black community, and his worldwide reputation as one of the most celebrated performers to ever grace the Broadway stage.”

Mr. Jones was not present at the September 12 dedication ceremony. According to theatermania.com, “ a few days earlier, he was given a tour of the venue.” Yesterday’s Playbill quotes Jones as saying, ““For me standing in this very building 64 years ago at the start of my Broadway career, it would have been inconceivable that my name would be on the building today. Let my journey from then to now be an inspiration for all aspiring actors.”
Built in 1912, the former Cort Theatre was named for John Cort, a Seattle-based theatre manager who owned the building before the Shubert brothers acquired it in 1927. The façade, designed by Theatre architect, Thomas White Lamb, was inspired by the 18th-century Petit Trianon palace at Versailles.

Jones’s Broadway career began in 1957. Over the following six-and-a-half decades Mr. Jones rose to star in countless stage and screen productions (including 21 Broadway shows), becoming one of a small number of lifetime “EGOT” (Emmy, Grammy, Oscar, Tony) winners. Jones’s Tony Awards include Best Actor in a Play for The Great White Hope (1969) and Fences (1987), as well as a Lifetime Achievement Award in 2017. He has additionally won seven Drama Desk Awards and has been awarded the National Medal of Arts and the Kennedy Center Honor.
The reaction to the theater, last Monday, was a roar of approval. Folks are anxiously awaiting the James Earl Jones Theatre’s first production. It’s the Broadway premiere of Ohio State Murders by legendary Obie-winning playwright Adrienne Kennedy. This will mark the acclaimed Black playwright’s Broadway debut at the age of 91. The drama stars Audra McDonald, the Emmy, Grammy, and six-time Tony winner, and is directed by Tony winner Kenny Leon. Ohio State Murders is a limited engagement. Previews are scheduled for November 11 with a planned opening on December 8.

Bernice Elizabeth Green, a veteran award-winning journalist, was the first Black publicist at CBS TV Network and directed publicity for over 125 broadcasts, including news, series, mini-series and specials — from 60 Minutes to Murphy Brown and Frank’s Place to Kennedy Center Honors.

What Has Always Mattered

In Remembrance of Dr. Albert Vann