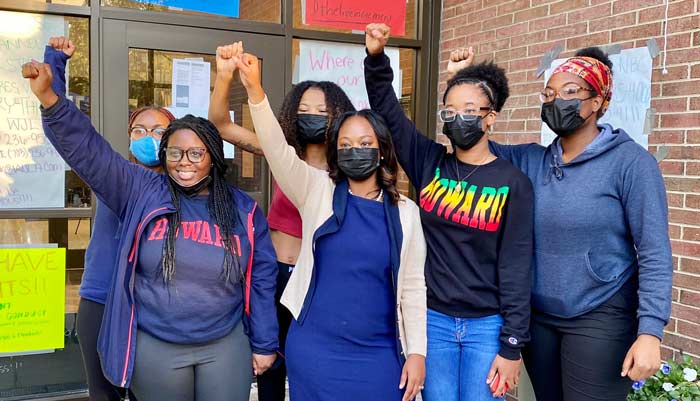 After 34 consecutive days of rallying, sleeping in tents and occupying a central campus building, Howard University students declared victory last week in their battle against a school administration they claimed had not been fulfilling its responsibility to its students. Students accused school leaders of ignoring dangerous campus housing conditions and other safety issues.
Following weeks of negotiations, university officials and the students announced last week that they had come to an undisclosed agreement, ending the dramatic standoff that chronicled the power of student-led protests.
“We came, we saw, we declared and we won,” said Channing Hill, one of the protest’s leading student organizers, during a press briefing held last Monday at the Washington, D.C., university
“This is a welcome step forward as we continue to bring together our Howard community,” the university’s president, Wayne A.I. Frederick, said in a statement to Yahoo News. “The health and well-being of our students is the most important part of my job as president.”
Howard, one of the nation’s most prominent historically Black colleges and universities, or HBCUs, became the epicenter of collective student organizing after receiving nationwide attention on social media and a show of solidarity from other campuses’ activists. At its height, more than 150 students occupied the Blackburn University Center on campus while calling on the administration to address issues of mold and leaking pipes in dormitories along with Wi-Fi connectivity issues and infestations of rodents and roaches in the dining halls. The problems led to some students becoming sick and, in extreme cases, going to the hospital, while others fell behind in their classwork.

“No matter how much coverage we get, no matter how many pictures go out, people still don’t understand the sacrifice,” Hill told Yahoo News. “I went a month without going to class. It was weeks and days of running on two to three hours of sleep. People don’t understand the danger or how traumatic this was. … Students broke down both physically and mentally. It was extremely difficult, and not a lot of people understand that. I think people also kind of miss that this is not just the Howard issue … this is a national issue.”
Students from fellow HBCUs, including Florida A&M, North Carolina Central and Spelman College, joined Howard students on campus in a show of support. In Atlanta, activists from Spelman, Morehouse College, Clark Atlanta University and Morris Brown College were inspired by the Howard protest to launch their own campaigns for better housing conditions, according to theGrio.

“The protest played the role that any other protest plays,” Hill said. “If you’re a student of the movement, it’s not the protest that provokes the change but the work done after, behind and in between. So I believe that the protest did what it could. … However, this is just the beginning.
“The struggle does continue,” she added.

“The administration’s responsibility to students is very clearly defined by the fact that we pay to go to this school,” Hill said. “There is a responsibility to make sure students are safe and protected on campus and to make sure that students have the resources that they need to succeed on campus.”
Student-led protests have long been an integral part of student life. Going all the way back to 1507, students rioted and destroyed lecture halls after professors at the University of Padua in Italy canceled student spring break, in what became known as the first student-led demonstration.
“College students are prompted every day to question every assumption,” Emerson Sykes, a staff attorney with the ACLU’s Speech, Privacy, and Technology Project, told Yahoo News. “And I think that in many ways, they take those things to heart and they push for change around them. We all benefit from that change.”
“When you look at the history of student-led protests, it shows the power that they have,” Sykes said. “Whether it’s in South Africa, whether it’s in the United States generations ago or today, I think young activists, particularly on college campuses, have consistently led the way in terms of making sure we are asking the right questions.”
Over the last 100 years, HBCUs in particular have been at the forefront of some of the most impactful student-led protests. In the 1960s, nine students at Alabama State College, now Alabama State University, were expelled for staging sit-ins at the Montgomery Courthouse, targeting the court’s white-only lunch counters. The incident led to a landmark case that ruled that students deserved due process.

Howard is also no stranger to a deep history of student activism. Newark, N.J., Mayor Ras Baraka, a 1991 graduate of the school, spoke at a rally organized by alumni earlier this month and shared how, as a student in the late 1980s, he and others protested for the removal of the infamous Republican strategist Lee Atwater from the university’s board of trustees.
“I understand where the kids are coming from,” Baraka told the Washington Post. “Protest is part of your education at Howard.”
Protests are now happening at a greater frequency on college campuses than ever before, greatly influenced by an uptick in demonstrations happening around the country, according to a new study released this month. The study, “World Protests: A Study of Key Protest Issues in the 21st Century,” which took a look at 2006 to 2020, found that demonstrations have more than tripled in the last 15 years.

“We have to realize that progress is possible, but progress is only possible if you have limits on the government’s authority to punish people for their ideas, for their speech and for their protest,” Sykes said.

Abode for Joy … and African Voices