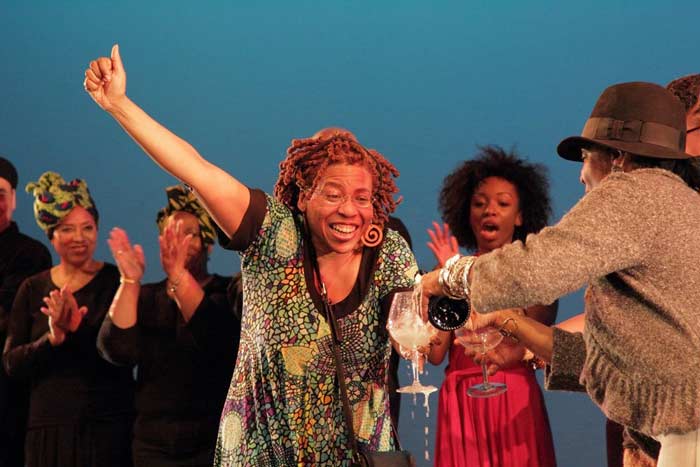 Citadels of Knowledge Make History as they Preserve It

One of the highlights of Spelman College’s 140th anniversary year, this year, was the announcement last spring that it would archive African Voices, a literary magazine founded by Brooklyn’s own, Carolyn Butts.
Spelman College, located in Atlanta, is a leading liberal arts college widely recognized as the global leader in the education of women of African descent.

Butts founded African Voices Communications, Inc., a nonprofit arts institution, in 1992 and exists currently as the umbrella for one of the few surviving print magazines documenting Black art, literature and culture.
Past editions of the magazine, along with organizational records, videos and digitized photographs that span three decades, are being preserved by Spelman College, alongside a historical archive of the Reel Sisters of the Diaspora Film Festival & Lecture Series, the first Academy Awards qualifying film festival dedicated to providing opportunities to women of color in the film industry.

Through this partnership, granted funding by the New York Community Trust, the Archives will also have access to an extensive list of 5,000 films produced, directed or written by women of color since 1997.
It is no secret that Our Time Press views archivists as the new activists. In a time when great moments of our history are being lost or forgotten, both African Voices and Spelman College are committed to preserving remnants and whole catalogues of the history and the stories of people of color. We have here, one historic institution preserving the work of another.

Spelman has been committed to documenting its history since its founding in 1881. As the official repository of the College, the greater part of its Archives consists of administrative records, departmental and program records, publications, photographs and other material related to the history and administration of the College.
The African Voices archive includes magazine editions from 1993 through 2021, including issues guest edited by poets Sonia Sanchez and Quincy Troupe, and a speculative fiction issue edited by Sherée Renee Thomas that features an interview with Spelman’s former Distinguished Chair for the Humanities Tananarive Due, and a short poem by Audre Lorde, whose papers are also held by the Archives.

In addition to literature, photography and film, the preserved archive will include the work of several powerful artists whose visual language compliments the magazine’s literary contributions by emerging and established writers.
“We’re proud to have a prominent HBCU and women’s college house nearly 30 years of writings, art and digital media by artists of African descent,” said Carolyn A. Butts, executive director and founder of African Voices. “As home to the work of author-filmmaker Toni Cade Bambara and others, it is an honor to have our collection archived in such a fitting institution that is aligned with our mission to support Black artists and women.”

“I am elated for the donation of the African Voices collection to the Spelman College Archives, and for the ongoing collaborative relationship. This partnership will amplify the work of the African Voices staff, board, the creative artistry of the contributors, and the depth and breadth of the Black diasporic cultural experience overall,” said Holly A. Smith, Spelman archivist, said last spring. “The connection will also facilitate important research on the experiences of Black women and Black communities nationally and internationally. Spelman’s archives will be a wonderful and careful steward of these materials for long term access and preservation of this critically important collection.”

More About Spelman:
Spelman is the country’s leading producer of Black women who complete Ph.D.s in science, technology, engineering and math (STEM). Other recent initiatives include a designation by the Department of Defense as a Center of Excellence for Minority Women in STEM, a Gender and Sexuality Studies Institute, the first endowed queer studies chair at an HBCU, and a program to increase the number of Black women Ph.D.s in economics. New majors have been added, including documentary filmmaking and photography, and partnerships have been established with MIT’s Media Lab, the Broad Institute and the Army Research Lab for artificial intelligence and machine learning. Outstanding alumnae include Children’s Defense Fund founder Marian Wright Edelman, Walgreens Boots Alliance CEO Rosalind Brewer, political leader Stacey Abrams, former Acting Surgeon General and Spelman’s first alumna president Audrey Forbes Manley, actress and producer Latanya Richardson Jackson. For more information: visit www.spelman.edu/about-us/archives.

The Lost Report: The Commission on Students of African Descent