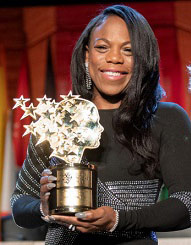 The Varkey Foundation’s $1 million Global Teacher Prize was awarded to a high school teacher from Maryland who beat over 8,000 candidates.

According to CBS News, Keishia Thorpe, a teacher at International High School at Langley Park in Prince George’s County, was nominated from thousands of teachers from 121 nations.
The ceremony was organized by actress Isabelle Huppert, who introduced Thorpe as the winner of the main award from the UNESCO offices in Paris.

During the 2018-2019 school year, she reworked the 12th grade English curriculum to make it more representative of her students and launched college preparedness activities that earned students $6.7 million in scholarships.
During the ceremony, Thorpe said, “Education is a human right, and all children should be entitled to have access to it. So, this recognition is not just about me, but about all the dreamers who work so hard and dare to dream of ending generational poverty.”

Thorpe, a Jamaican who came to America on a track and field scholarship, began fighting for education at a young age. Together with Dr. Treisha Thorpe, her twin sister, they founded the non-profit U.S. Elite International Track and Field with the goal of assisting “at-risk” student-athletes from throughout the world in obtaining scholarships to U.S. colleges and universities.
“Every child needs a champion, an adult who will never ever give up on them, who understands the power of connection and insists they become the very best they can be,” Thorpe stated. “This is why teachers will always matter. Teachers matter.”

Thorpe has been recognized before for her contributions to education. She was chosen National Life Changer of the Year for the 2018-2019 academic year. Thorpe was also given the Medal of Excellence by Maryland Governor Larry Hogan for her efforts to promote inclusivity in school.

“This is to encourage every little black boy and girl that looks like me and every child in the world that feels marginalized and has a story like mine and felt they never mattered,” Thorpe said.

Hugh Jackman, who hosted the event last year, appeared via video link at this year’s virtual ceremony to announce the winner of the inaugural Chegg.Org Global Student Prize: Sierra Leone’s Jeremiah Thoronka took home the $100,000 prize for his efforts to combat energy poverty.