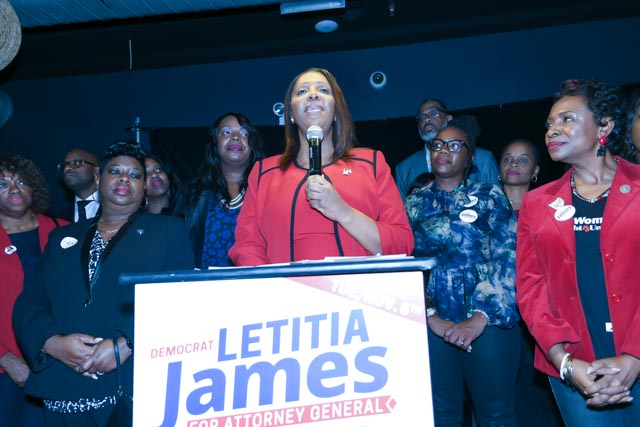 As she gets to work, Tish will have a lot on her plate as she spoke about it in her August 30thinterview in Our Time Press.

On the issue of corruption:

“It’s a sad commentary when 30 elected officials, state elected officials, have been convicted over the past decade.  What we need to do is root out corruption and restore public confidence in integrity and public confidence in government, period. Be it in Washington, Albany or City Hall …wherever the facts and evidence lead me, we will not hesitate, working with the comptroller’s office, working with district attorneys, to prosecute either civilly and/or criminally individuals who betray the public trust.”

On the state’s greatest challenges:

“We will continue the investigations (of President Trump), now under the leadership of Barbara Underwood, the current attorney general.  We will continue to investigate his business transactions and holdings. We will also focus on corruption wherever we find it, whether on the federal, state or local level. I’ve been to Buffalo, where we’ve got lead poisoning and high asthma rates, as we do here in Brooklyn. I’ve been to Newburgh, where individuals are dealing with water and soil that need remediation. And the federal EPA is unfortunately closed for business. They are not enforcing the Clean Air Act or the Clean Water Act… …we need to again take on the NRA, which holds itself out as a charitable organization. But, in fact, they are not.  They are nothing more than a criminal enterprise. We are waiting to take on all of the banks that finance them, their investors.

“Consumer fraud is a major issue all over the State of New York. We have to stand up for immigrants who are afraid of ICE. Who are afraid of going into courthouses because they are afraid of being detained by ICE. Immigrants who are seeking justice and cooperating with the district attorney’s office and/or seeking “orders of protection.” We need to stand up for reproductive rights and women’s rights. Women who are paid less than men for doing the same job. Women who are discriminated against simply because they want to have children.  We need to defend “Net neutrality” for many tech companies that exist in Brooklyn and all the start-up companies and freelancers. We need to make sure we codify Roe v. Wade, and last but not least, foreclosures and zombie houses. We need to go after the banks who charge outrageous interest rates and who saddle homeowners and young people with debt at a time when wages are stagnant and individuals are having a hard time making ends meet.

It’s important that individuals understand the role of the attorney general.  There is an advocacy role in the office of attorney general and we will use our activism and the ability to introduce program bills to the state legislature to address the disparities that exist in terms of public education all around the State of New York.