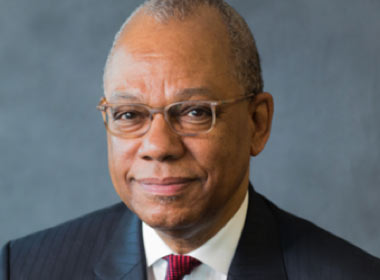 By Fern Gillespie
The Rev. Dr. Calvin O. Butts III, the nationally known pastor of Abyssinian Baptist Church in Harlem, who died last week at age 73, was not only a pastor who preached from legendary Rev. Adam Clayton Powell, Jr.’s pulpit, he was a community activist, building developer, and college president.

For more than 30 years at Abyssinian, he focused on the church’s core values of worship, evangelism, service, and education. He was a frontline community activist on drugs, alcohol, and violence affecting the community. He founded and chaired the nonprofit Abyssinian Development Corporation and funneled over $1 billion into local residential and commercial projects. The corporation created schools, commercial development, and affordable housing. It provided social services, a model that helped transform the neighborhood, and that other development companies created by religious institutions sought to copy.

Dr. Butts’ 20-year career as president of SUNY Old Westbury from 1999 to 2020 made him the longest-serving president in the history of the college. During his administration, Dr. Butts’ successes included enrollment growth of more than 1,800 students (more than 56 percent), the introduction of graduate instruction at the college with 19 master’s degree programs, and more than $200 million in capital construction and renovation projects. Annually, U.S. News and World Report recognized the College for the diversity of its student body.
As a child, Dr. Butts grew up in Manhattan’s public housing; later, his family moved into a house in Queens. After attending Morehouse College in Atlanta and earned his Master of Divinity and Doctor of Ministry degrees from Union Theological Seminary and Drew University.

His impact inspired Brooklyn’s church leaders. Our Time Press reached out to several pastors to share their insights and memories.
“For over 35 years, Dr. Calvin Butts, Senior Pastor of Abyssinian Baptist Church of Harlem, has been one of the most influential and iconic figures in the Big Apple. Henry L. Morehouse, the originator of Dr. W. E. B Dubois’ popularized theory of the Talented Tenth, may have been eulogizing Dr. Butts when he wrote in 1896: [A] man, with superior natural endowments, symmetrically trained and highly developed…a mightier influence, a greater inspiration to others…. Dr. Butts dared to leave us “…better than when he found us”—to borrow the words of Dr. Benjamin E. Mays, former president of Morehouse College.
Rev. Anthony L. Trufant
Emmanuel Baptist Church of Brooklyn

“Rev. Dr. Calvin O. Butts, III was a 21st-century renaissance minister for economic, social, and racial justice. He and the Abyssinian Baptist Church of New York City were made for each other. The ministry of Dr. Butts has changed the landscape and trajectory of so many marginalized and neglected. His voice and his influence will be sorely missed at a time when we need him more. May we draw comfort in knowing that his legacy serves as a roadmap for the liberation of all oppressed peoples.”
Rev. Adolphus C. Lacey, PhD
Bethany Baptist Church of Brooklyn

“Rev. Calvin Butts embodied unprecedented and unparalleled leadership for the New York metropolitan community and beyond. He provided moral and ethical leadership in church, education, and politics over five decades. Doing one of these things would make a solid and significant career. Rev. Butts managed to be a force in all three arenas with power. His death leaves a great void in New York leadership. Rest on, dear friend and pastor.”
Rev. Gary V. Simpson
The Concord Baptist Church of Christ of Brooklyn

Rev. Dennis Dillon, Publisher, The Christian Times
In the early 1990s, I sent a reporter to Harlem to cover a story on a Black preacher who took off his robe, put down his Bible, and picked up paint brushes and rollers, painting over billboards advertising cigarettes. Rev. Calvin O. Butts III’s ministry of active engagement was garnering attention and getting noticed. And as you can imagine, corporations like Winston Salem, Reynolds, and Philip Morris – predatory enterprises that were fueling their tobacco products and preying on the young – were not happy.

In those days, almost every billboard in Harlem, and Black and Brown communities across America, were promoting smoking with slick ads, insidiously leading people to this very harmful habit – and Butts was not having it! Camel, Winston, Kool, Newport, Marlboro, and Lucky Strike were among the popular brands whose colorful billboards were painted white. With every stroke of his paintbrush, Butts was sending messages to the community that we desire better than this while he was challenging these corporations to health justice. This trumpeter of truth and trailblazer of justice stampeded into the New York spotlight challenging the status quo and hoisting high the banner of freedom through the salvific power of Christ.

Butts had conviction and the courage to go with it. His depth was rooted in his duty; he lived a purposeful life, proclaiming from the pulpit what he practiced on the pavement.

Dr. Calvin Butts and I have had some misunderstandings and disagreements on style and approach on how faith and the pulpit should work to redeem and impact the community. In fact, during much of the late 90s, the New York Times and other city reporters found great delight in jumping between Butts, Dr. Floyd Flake, and me for opposing views and published stories with us contradicting each other. Frankly, we did not know these reporters’ evil intent until we read the stories intimating that we, as Black preachers, were contradicting each other.

In truth, Dr. Butts guarded the sacredness of the pulpit and the sanctity of the church, and he believed that social activism fit better with the Jesus gospel than economic empowerment and business development. But in reality, his diligent effort to paint over corporate billboards and challenge these corporations is a central pillar on the road to economic justice and parity. The gospel of Black economic empowerment finally reached him. This Morehouse graduate not only helped to lead the fight against poverty, but he has also been an advocate for economic development and a boardroom-broker who helped kick in the door to expanded opportunities for Black New Yorkers.

When Dick Gidron Cadillac, one of America’s first and premier Black-owned dealerships, was treated unfairly by General Motors, it was Calvin Butts and I who helped lead the negotiations with General Motors. Several years later, when I showed up in federal court in Central Islip, Long Island, with my friend Bill Adkins, owner of Palanker Chevrolet, in another case against General Motors, I was pleasantly surprised by the presence of Rev. Dr. Calvin O. Butts. This man had an unquenchable thirst for justice and has always fought for Blacks to have their fair share and equal voice.

Several years ago, he raised concerns about McDonald’s Corporation. At issue was the living wage and the health quality of the food. Butts called and asked me to explain my support for McDonalds. I noted that I had no affinity to McDonald’s Corporation, but because I know and have worked with most of the Black owned-operators in New York and New Jersey, I was concerned about how any action would impact them. The reverend understood, agreed, and adjusted his action.

My last conversation with this legendary preacher was several weeks ago. He talked about the strength of his family and the faith that keeps him going. Apprehensive yet assured. Prostrate yet positive. Reserved yet resolute! We prayed together and closed the call with the confidence of another conversation, and, as usual, his voice was strong. Now that one of America’s leading ministers, educators, and activists is gone, our follow-up conversation will have to take place when we get over yonder.

As noted by multi-Emmy-winning producer A. Curtis Farrow, “God has called home our beloved brother, friend, and pastor. We will miss his brilliance, leadership, and ability and power as a drum major for peace – all while keeping God first and foremost in this turbulent environment.”

Although our pleasing moments with him are gone, our precious memories of him live on. The events we co-convened and the times we collaborated on behalf of our people and community have greatly overshadowed the misrepresented comments inked by any news reporter’s pen.

Butts was solid, strong, and spirited, and yes, his life has taken flight – but his legacy is now the new light!

American Mid-Terms 2022:
The Bitter and The Sweet