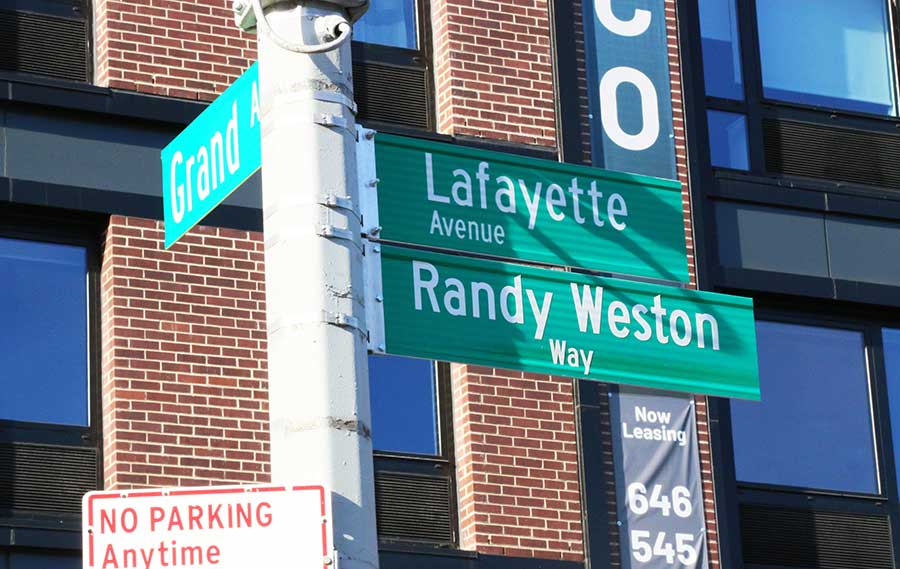 The co-naming was just the latest in hundreds of tributes throughout the world to the King of African Rhythms who passed last year at 92.

But this milestone was the most poignant. It occurred across the street from where he grew up.

Where he crafted a message about music that’s heard all over the world, making the connections between American jazz and African juba.

His artistry was honed on that block through hours of practice and channeling influences like Thelonious Monk and Duke Ellington.

He never left the Avenue where he lived: Lafayette. He knew the ancestors waited for his return.  And the ancestors knew that wherever there was a professionally-tuned piano, Weston found his home.

He travelled from Lafayette spreading his message to Nigeria and Morocco (where he lived for five years).

In 2001, the National Endowment for the Arts bestowed Randy Weston a Jazz Masters Award, the top award for a jazz artist in America.

But of all the honors, it’s probably the street-naming, a tribute from “home,” that will memorialize his legacy in Brooklyn.

Sunday, hundreds of Randy’s neighbors like the patrons of 3 Luigis, Urban Vintage, Peaches and Choice, and friends from Clifton Place, Grand and Greene Avenues – people who knew and remember the tall stately man as he took his regular walk around the block.   They mingled with world-class artists of all traditions, like percussionist Neil Clarke and painter and sculptor Otto Neals, just outside the office of Carolyn Butts’ “African Voices Magazine” Ö to give their most famous ancestor a glorious celebration and signage proclaiming: “Randy lived here, lives here.”

Where’s the Next Eddie Ellis?