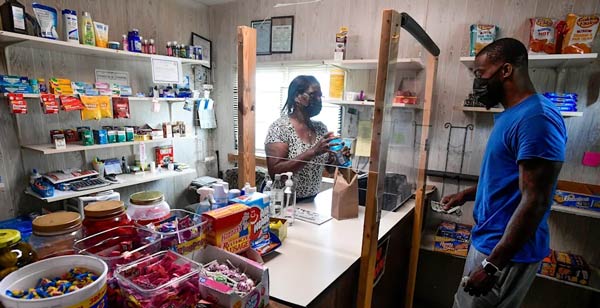 LAWRENCE O’DONNELL of MSNBC’s “The Last Word”: The vaccination rate among adults in Panola, Alabama is now 94 percent. And it is 100 percent among people over the age of 65. And joining us now is Dorothy Oliver from Panola, Alabama. Also with us Jeremy Levine and Rachael DeCruz who directed and produced “The Panola Project” for “The New Yorker” documentary series.  Dorothy Oliver, What gave you the idea to be the person who made sure everyone was getting vaccinated?

DOROTHY OLIVER, LED THE VACCINATION EFFORT IN PANOLA, ALABAMA: Because I saw the seriousness of this disease. And I decided that I’ll just take charge and just talk to everybody that come into the store or either wherever I go and just talk to them and ask them. Let them know how serious it is to go ahead and get that vaccination. So I didn’t have any problem. Everybody just worked right with me.

O’DONNELL: In your one-on-one encounters with people talking them into this, how long does it usually take?
OLIVER: Oh, it doesn’t take then long. You talk them into it. And I just tell them about how serious it is and how I’m working in my community to make sure that all of my people, my community get vaccinated. And they — it don’t take that long for me to talk them into it.
Probably just one person I had a hard time with but most of them agreed and go ahead and go get it. Asked me to go ahead on and, you know, schedule appoint for them.

O’DONNELL: Do they tell you why they haven’t been vaccinated already?
OLIVER: Yes, some of them are saying “I’m just scared.” “I don’t want to get it.”  “Some will say: I’m  just going to wait …to see how everything will go and then I’m going to probably take it.»

O’DONNELL: How did you feel when you got to 100 percent of people 65 and over?
OLIVER: Oh goodness. I felt real good. And I felt like we were making progress. When we got that far,  I wanted to shout because I know, we did a good job trying to get everybody to get their shot.

O’DONNELL: Rachael, how did you find Dorothy and bring her story to us?
RACHAEL DECRUZ, Producer, “THE PANOLA PROJECT”: We were living in Tuscaloosa, Alabama at the time. And actually heard about Dorothy from an article in “The New York Times”.  We were really interested and inspired by her work.
We drove out to Panola, met her at her convenience store. And as you saw in the film, she’s quite an enigmatic presence. We had a really wonderful conversation with her.
It was really clear the important and necessary and vital work she was doing in the community. And we just wanted to find a way to help elevate and share her story.

O’DONNELL: Jeremy, what do you think Dorothy’s secret is for convincing people?
JEREMY LEVINE, “THE PANOLA PROJECT”: Yes.  I think we could all learn so much from Dorothy. She — I was just so impressed seeing her at work.
She would show up. I mean she would literally kind of roll up on to people’s lawns.
LEVINE: And you know, she would have these conversations with some folks who were scared as she mentioned, or some people who also have deep disagreements with her. And she was never, she would never talk down to people. She would never yell at anybody, right.
This is what I feel like we’re all so used. We’re all at each other’s throats. And instead, Dorothy meets people with love. She meets them where they’re at. She answers questions. She jokes around. And I’ve honestly never seen somebody so incredible at persuading people to make such an important decision.

O’DONNELL: Dorothy, does it help that you know just about everyone in town?
OLIVER: That’s the key right there. I know … just about everybody knows me. And they know how hard I work and they know I’m serious in what I do. And that makes a lot of difference.

O’DONNELL: So Dorothy, you’re getting people to trust you the way they would trust your doctor — they would trust their own doctor. How do you do that?
OLIVER: I guess because I’ve been working in the community on different other, you know, occasion with other things that’s going on. And they know me and they know I’m serious and I would do what I say I’m going to do. And they know if I say it, it’s just about — you know, it’s ok to do it, you know.

O’DONNELL:  Do you think you’re going to be able to get that to 100 percent?
OLIVER: I’m not intending to stop until the job is done. So I believe.

O’DONNELL: And that has been the way you’ve treated apparently every day of this. You don’t stop until you do everything you can do, every single day you’re out there.
OLIVER: From the time I start until I stop at eating, I’m still talking to somebody, trying to get them to go ahead and get the shot or, you know, whatever I need to do to help them.
If I need to take them, I take them, you know, to get it. Or either — you know, just make a phone call.

United on the March and on the Move