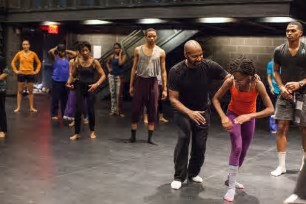 While attending P.S. 3 in Bedford-Stuyvesant, Ronald K. Brown saw an Alvin Ailey dance concert where as a youngster he discovered that a dance could be made with a chair.

There were some bumps in the road to that point but Brown high-stepped them, encouraged by instruction from important fans, including Arthur Mitchell, Bessie Schoenberg, Audre Lorde and others.

The pivot from a possible journalism career to his beloved dancing started with a scholarship to the Mary Anthony Dance Studio on the Lower East side. But, he admits his influences came long before then building from his ancestral family roots, including an array of strong, hearty hardworking landowner and entrepreneurial ancestral grands, greats and great grands- parents.

In an interview with Our Time Press, he talked about the mentors in his life, and how he is happy to be have an artistic home at Billie Holiday Theatre.

This weekend, RestorationART presents Ronald K. Brown/Evidence, the renowned dance company that has made Bed-Stuy its artistic home, will perform for the very first time in The Billie Holiday Theatre with a retrospective concernt of revolution and memory. Join us for a conversation on opening night between two dance greats – Ronald K. Brown and Judith Jamison.

Opening Night Concert and Conversation, followed by a post-concert reception

Friday night, a conversation with Ronald K. Brown and Judith Jamison – explores the legacy of choreographic work shaped by the Civil Rights Movement to the work being created now in the era of Black Lives Matter. This conversation is followed by an evening-length dance concert by the Ronald K. Brown/Evidence Dance Company. Evidence will present excerpts from High Life, inspired by the work of Jacob Lawrence’s The Great Migration, as well as Jesse B. Semple. Tickets are available at RestorationART.org.

He credits relatives, like Aunt May and Aunt Maggie, who gave giving him the inspiration, and a long list of grand begetters with giving him the genes of creativity, expression and self-sustenance.

Brown told us how he incorporates nearly every experience he’s every had – whether from a mountain top in a foreign country where monks lived to the Sumner (now Marcus Garvey) streets where he played or the backwoods of North Carolina where he spent summers, and Cuba, Liberia, Senegal, Ghana, Ivory Coast, the places where he found the universal “human condition” which connect us all.

This evening of inspired words and movement the dance gods and goddesses are likely to be present in the theatre.

Hopefully, there will be time for Mr. Brown and Ms. Jamison to discuss their respective dance mentors of whom Mr. Brown spoke highly.

Schoenberg told him to “speak up” and to “do what you intend to do” and “always make sure people understand where you come from.”     Mitchell encouraged him to maintain fluency in adapting traditional African dance movement, but also to learn “ballet idiom.”

In addition to Ailey and Jamison, Brown is inspired by the work of Dianne McIntyre and Katherine Dunham — all storytellers. Mr. Brown, himself, is working on a collection of essays, short stories and poetry.

In the 1990’s, Mr. Brown visited a convent on a high mountain and lived a few days in one of their cells. The small window allowed him to see sky and observe the village dance festivals far below. He said he connected to a spirit, perhaps the same one he already knew so to speak.

When Mr. Brown visited Ms. Dunham in New York City, before she passed, he told her, “I can dream and do this thing I’m doing because of you.”

She replied, “I don’t know what’s wrong with some of you young people, today. Please don’t let us down.”

Mr. Brown, not only dances, creates dances and encourages the community to dance, he also mentors and teaches dance to would-be, emerging and established dancers ranging from six to 79. He told us, “The responsibility of the artist is to tell the truth. I am clear with all my dances and my dancing. What I feel is what you are witnessing.”

He also said once, “What you are and what you think is a product of all the things that have gone into you; the things that are from your culture and your roots as well as the stuff from the outside. You are evidence of all that information.”   And so, too, is Mr. Brown.